Beginning in 2014, Astrium Services’ WorldDEM will provide a global Digital Elevation Model of unprecedented quality, accuracy, and coverage. A multitude of applications such as satellite image orthorectification, thematic mapping, aviation as well as defense and security-related missions will benefit from this unique dataset.

The TanDEM-X mission has recently accomplished a major project milestone: the second coverage of the Earth’s entire landmass has been finalized. This means that the two satellites TerraSAR-X and TanDEM-X are ready to take the final hurdle of the data acquisition campaign. They are now focusing their full attention on the Earth’s challenging terrain areas.

The twin satellites are taking a third and sometimes even fourth look at the high-altitude mountain ranges of the globe, 2 like the Himalayas, the Alps and the Cordilleras in North and South America. The purpose of these additional data takes is to ensure that details that might otherwise be hidden due to radar shadow areas such as steep terrain, valleys, canyons and gorges are made visible. The combined processing of these various data takes will ensure the global consistency and quality of the final WorldDEM product. 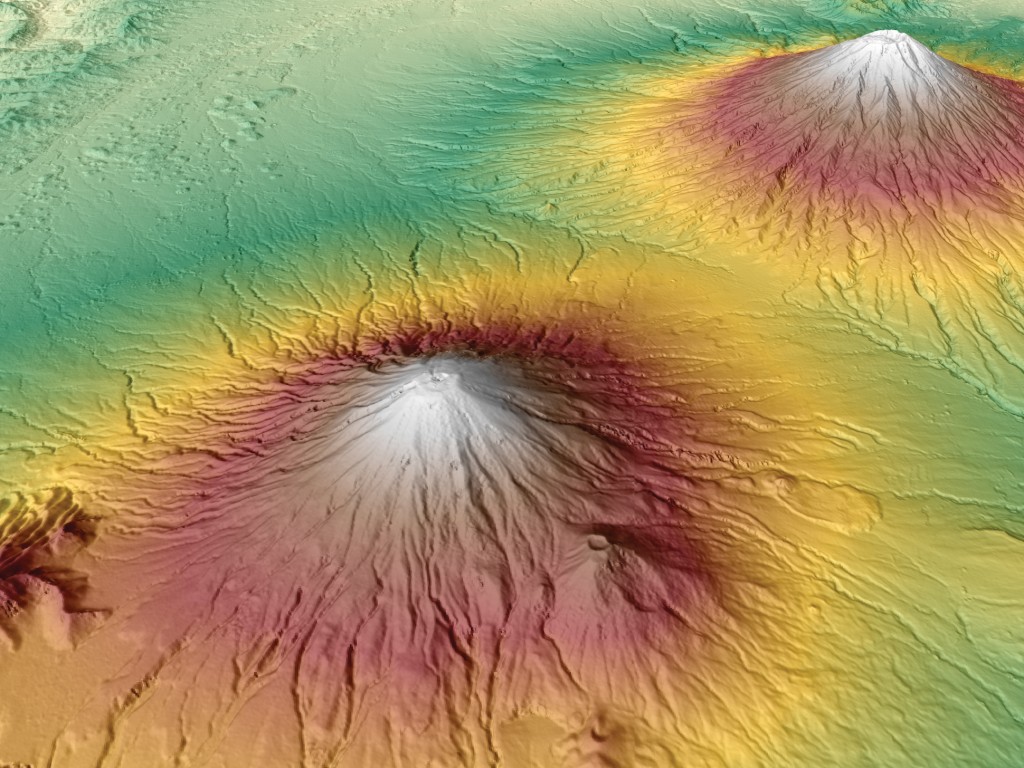 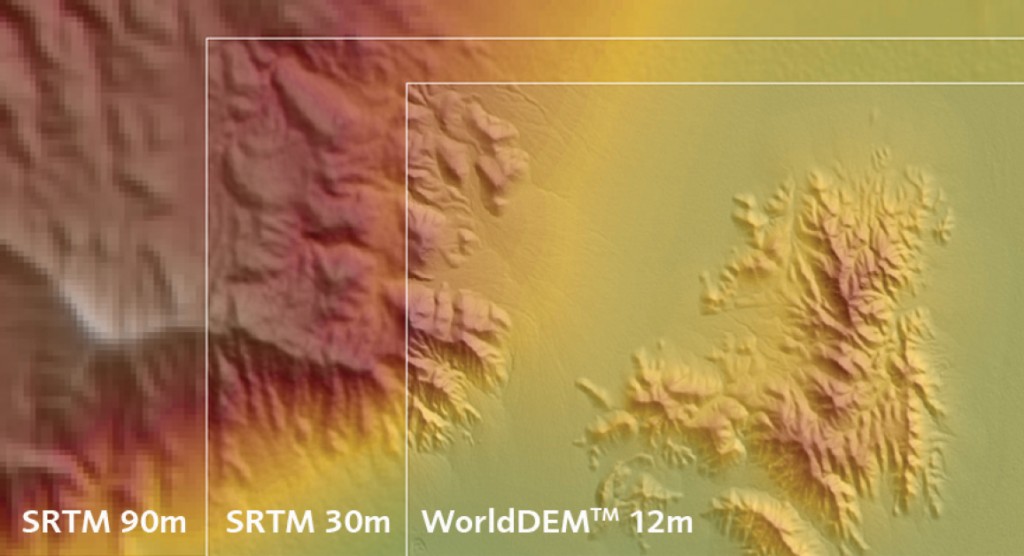 Pole-to-pole coverage joined with unique accuracy and quality—these are the defining characteristics of the WorldDEM. The WorldDEM is a game-changing disruptive technology providing the first truly global, single-source, high-precision Digital Elevation Model from satellites. The product will feature a vertical accuracy of 2m (relative) / better than 10m (absolute) in a 12m x 12m raster. The accuracy will surpass that of any global satellite-based elevation model available today. WorldDEM is intended to be the replacement dataset for SRTM and will define a new standard in global elevation modeling.

Precise elevation data is the initial foundation of any accurate geospatial product, particularly when the integration of multi-source imagery and data is performed based upon it. Fused data provides for improved reliability, increased confidence and reduced ambiguity. Thus the accuracy of the base DEM is key to reliable information.

Thanks to WorldDEM, operators of civil and military Earth observation satellites will have a standardized elevation model at their disposal for high-quality image orthorectification—no matter where their acquisition area is located on the planet.

Cartographic authorities around the world will be able to improve or update their standard cartographic maps thanks to this more accurate and up-to-date data source.

The global availability of the dataset will also support international cooperation and cross-border mission planning. Particularly when the rapid provision of accurate information is of utmost importance (for instance in case of emergency situations like natural or environmental disasters), the availability of a standardized, highly accurate DEM will be a major advantage as it enables the provision of reliable information to rescue teams on ground. 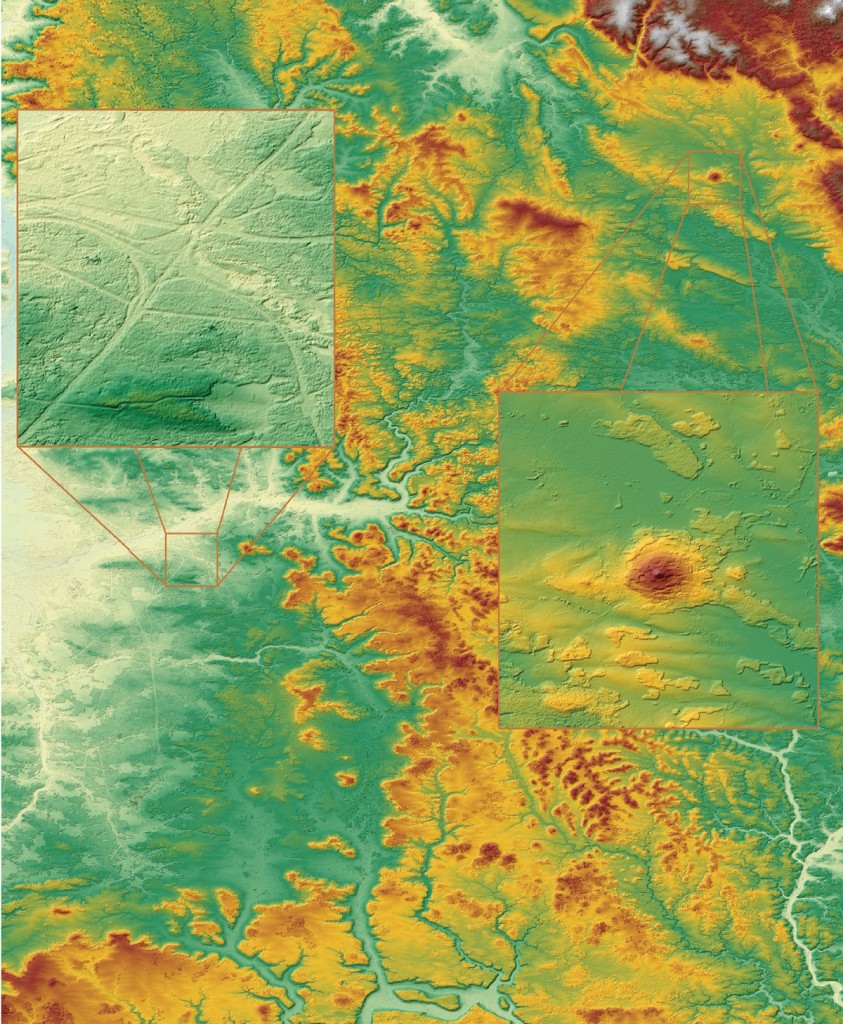 FIGURE 3.
WorldDEM example of a landscape near Nuremberg, Germany. The subsets show the impressive details visible in the height data: the motorway junctions including exit roads and the adjacent road network are clearly visible (left subset) and the distinctive form of the dome of an extinct volcano called Rauher Kulm can be seen (right subset). Courtesy 2013 Astrium Services / Infoterra GmbH.

The WorldDEM is built on the global TanDEM-X DEM as acquired by the TanDEM-X mission, which is performed jointly with the German Aerospace Center (DLR). Astrium Services holds the exclusive commercial marketing rights for the data and is responsible for the adaptation of the elevation model to the needs of commercial users worldwide.

Astrium Services will refine the DEM according to customer requirements, e.g. editing of water surfaces or processing to a Digital Terrain Model (represent- ing the bare Earth’s terrain).

” The acquisitions are not recorded region by region, but rather in the style of a jigsaw. Seemingly random acquisitions are made in different locations across the globe and piece by piece the jigsaw is completed with the overall picture becoming visible once all pieces are assembled.” 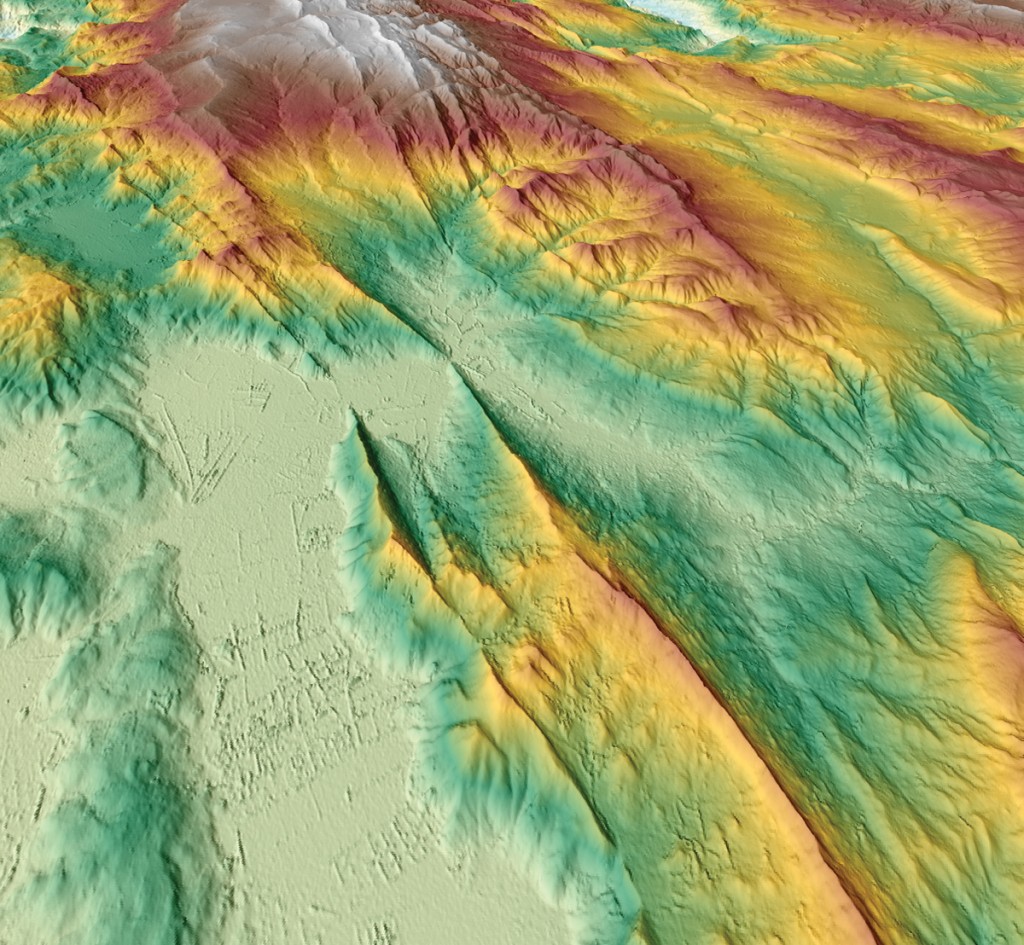 Technically the TerraSAR-X and TanDEM-X mission (implemented as a Public-Private Partnership between the German Aerospace Center DLR and Astrium) is a true novelty and already a great success. The two satellites form the world’s first free-flying high-precision radar interferometer in space. They fly in a very close formation with distances of as little as a few 100m—a technical feat that has never been tried before and that has now been working with perfect reliability for more than 3 years. Safe operation of this uniquely close coordinated flight of two satellites at an average speed of 28,000km/h is ensured through a Helix formation of the two spacecrafts.

The data acquisition is performed in the so-called bi-static mode. One satellite transmits the radar signal to the ground, while both satellites record the signal’s backscattering. (In a classic i.e. mono-static radar configuration, the same antenna is used for transmission and reception of the signal.) This means that one satellite is only “listening” to the signals that come back from the ground, which means that this one can save battery power and keep its radar instrument cool. By applying the so-called SAR-Interferometry (InSAR) technique, the phase difference of the two acquisitions is evaluated and the elevation information can be extracted.

The two SAR sensors operate independent of cloud coverage and lighting conditions and thus acquire data absolutely reliably. The worldwide homogeneous acquisition guarantees a global DEM with no break lines at regional or national borders and no heterogeneities caused by differing measurement procedures or data collection campaigns staggered in time.

The concept of the mission is to complete the global homogeneous DEM in the shortest possible time frame. To achieve this ambitious goal, the acquisition plan is optimised for time-efficient coverage of the Earth’s entire landmass. As a result, the acquisitions are not recorded region by region but rather in the style of a jigsaw. Seemingly random acquisitions are made in different locations across the globe and piece by piece the jigsaw is completed with the overall picture becoming visible once all pieces are assembled.

“The formation of TerraSAR-X and TanDEM-X was revised in early August. At the start of the mission, TanDEM-X circled around TerraSAR-X in an anti-clockwise direction; after the satellite swap, it is now clockwise.”

Following the first complete coverage of the Earth’s surface (concluded in early 2012), a slight adjustment to the acquisition angles of the satellites was made for the second coverage to eliminate remaining height ambiguities in first coverage data takes. While the first coverage already generated quality levels close to the final dataset specifications, with the second coverage, now dual baseline processing techniques are applied to increase the homogeneity of the global coverage.

For the third and fourth coverage, an even more complex adjustment was performed: the formation of TerraSAR-X and TanDEM-X was revised in early August. At the start of the mission, TanDEM-X circled around TerraSAR-X in an anti-clockwise direction; after the satellite swap, it is now clockwise. This change of formation was necessary to view complex mountainous terrain from a different viewing angle to eliminate missing information due to radar effects.

For the safe performance of this complicated manoeuvre, the distance between the satellites was first increased to approximately 10km. For the flight path adjustment, TanDEM-X was then rotated 180° so that the thrusters acted in the desired direction.

Following the successful modification of the flight path, TanDEM-X then started slowly to catch up again with its twin satellite to achieve the nominal distance of a few hundred metres. After the swap, both satellites are now once more able to observe the same ground track on the Earth’s surface. The complex manoeuvre took in total three days and was successfully executed by the experts at DLR.

The excellent cooperation and integration of expertise between the partners Astrium and DLR have resulted in an exceptionally smooth preparation and realization of the TanDEM-X mission. The exploitation of the advantages of SAR technology and multiple coverages of the Earth’s surface secure a highly homogeneous and accurate product for the marketplace. Customers from private industry and public authorities alike can be assured that from 2014 they can rely on the new highly precise base dataset for a multitude of applications.