A Partner of Apogeo Spatial

To hear the interviews with Bill Kurtis and Myrna, and about how this partnership came about via synchronicities, listen to the April 22 and May 26 episodes of Life 2.0 with John St. Augustine, https://rd2r2d.podbean.com/e/from-a-distance-1590583160/.

Watch the one-minute videos of Earth Matters to be entertained, informed and inspired, starting here!  More to come…

Joining forces with Apogeo Spatial is Earth Matters, a series of inspiring one-minute videos about the significance of planet Earth, the only home that humanity has ever known. The series offers informative videos about the earth, its living systems, its interconnectedness, and its miracles. The videos will appear with fresh content regularly on www. ApogeoSpatial.com.

Earth Matters made its debut as a radio show in 2013 with the highly respected journalist and A&E icon Bill Kurtis as the host. The intent of the program is to present concise information in just one minute that leads to transformation, as listeners learn more about planet Earth and what role we all play in the unfolding future. John St. Augustine is the creator and executive producer of the show that is taped at the award- winning Kurtis Productions in Chicago. 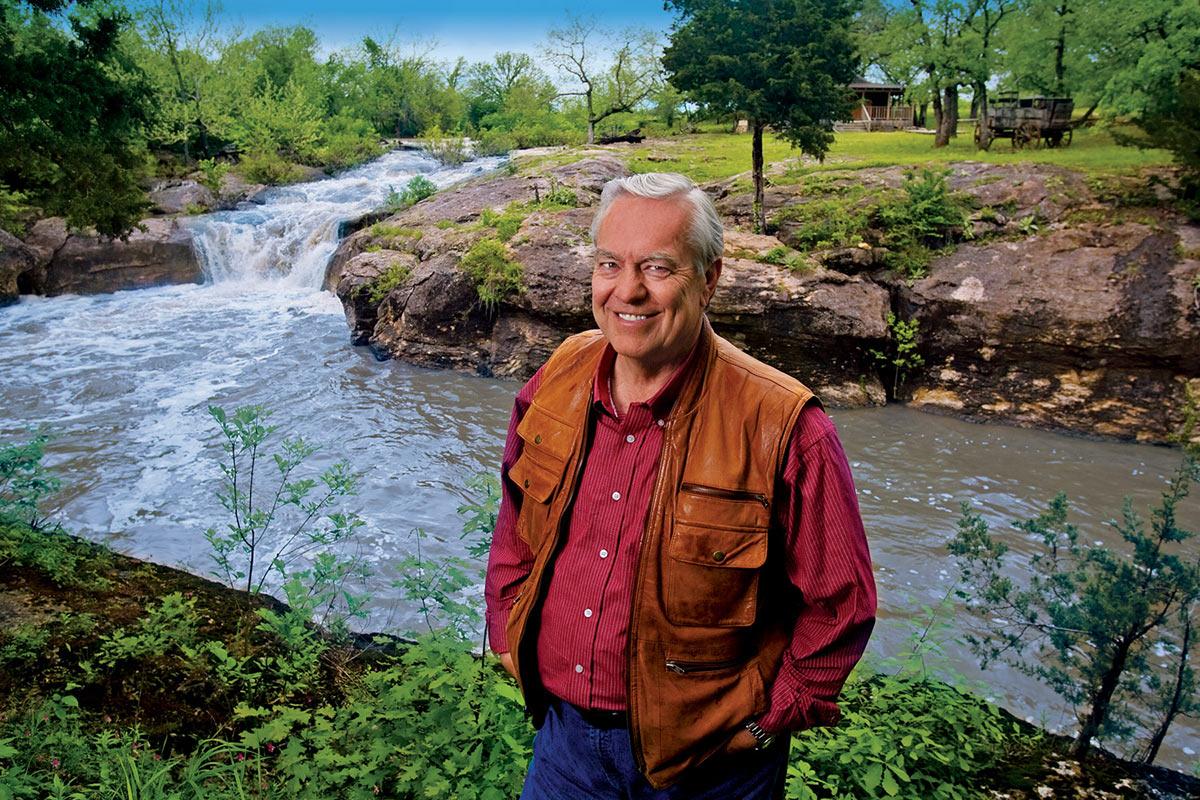 Celebrating the 50th Anniversary of Earth Day this year, John interviewed his friend Bill on his podcast, Life 2.0. The old friends remember the first Earth Day, when Bill was invited to Belmont Harbor in Chicago and found himself literally hugging trees, and some history, including a note about the creation of the EPA by Richard Nixon just a few months after Earth Day, and going back further to the beginning of measuring carbon by Charles David Keeling. Of course, now the chart measuring carbon increases is famously known as “The Keeling Curve” and “The Hockey Stick Graph” to which every climate activist refers, showing the spike in carbon levels in recent years. In 1999, Bill produced a movie called “Earth in the Hot Seat” after traveling the world for a year to film the effects of climate change. Ojibwe elder Muk-Ta-The’ says that Kurtis “speaks for the Earth.”

In his Life 2.0 podcast for May 26, John interviews Myrna to announce this partnership, and to hear about her journey, and how she came to care so much about using data from space to study the Earth, ultimately for the benefit of humanity. They discuss the important connection among all living beings, from plants and animals to humans around the globe, and how it has been thwarted in so many ways. She is committed to creating ways for that tie to be reconnected, for life itself to be celebrated and honored, which is to the benefit of each human. In addition to sharing this in Apogeo Spatial, she also works with Geoversity, an ecosystem of leaders and organizations collaborating in the pursuit of breakthroughs in human design, enterprise, and creative expression, inspired by nature in Panama. Read about that on page 26.

“The intent of Earth Matters has always been to inform and inspire individuals to take concrete, constructive actions in creating a sustainable future. The 300-episode radio version of the project reached millions of people. This partnership with Apogeo Spatial offers video, and increases the depth, breadth and impact of those messages, and we are confident that our collaborative efforts will be of great significance in raising awareness when it comes to Earth Matters.” 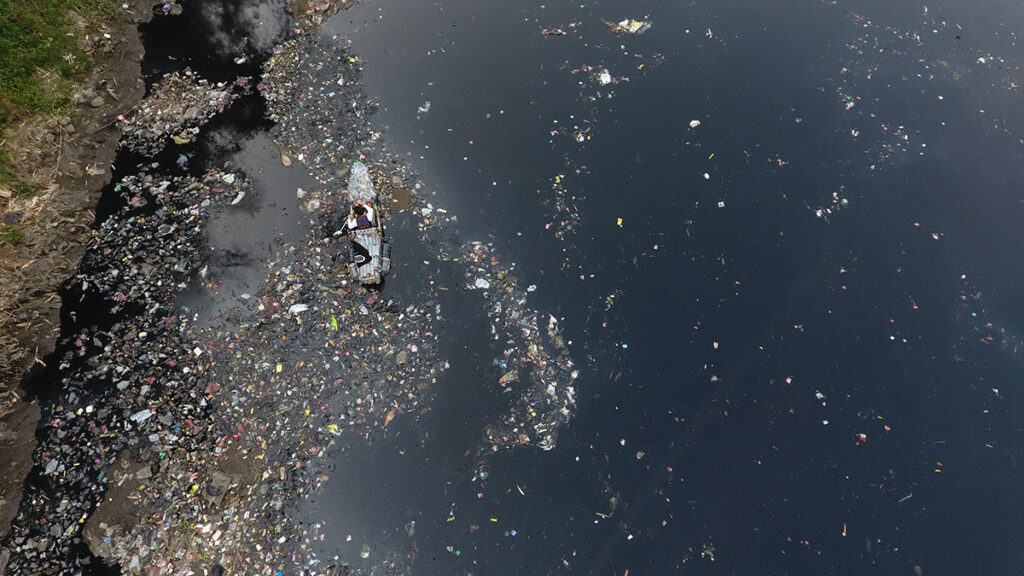 Earth Matters: Plastic in the Oceans

One of the greatest inventions, it seemed, was plastic, but more and more it has been showing up where it was never intended. From toothbrushes to toilet seats, from lunchboxes to milk bottles, plastic products have changed the way we live. However, like most ideas humans come up with, disposal of products after their use wasn’t really thought out, and post-World War II, when we became a throw-away society, a massive amount of plastic has shown up where it was never intended to be: in the oceans of the world where fish and seabirds mistake the bits of plastic for food, disrupting the natural order.

It’s estimated that there are 300,000 tons of plastic in the ocean that eventu- ally leaches toxins into the water supply. Americans discard 33.6 million tons of plastic each year but only 6.5 million tons are recycled. If you are not sure that reducing, reusing and recycling has any effect, guess again. 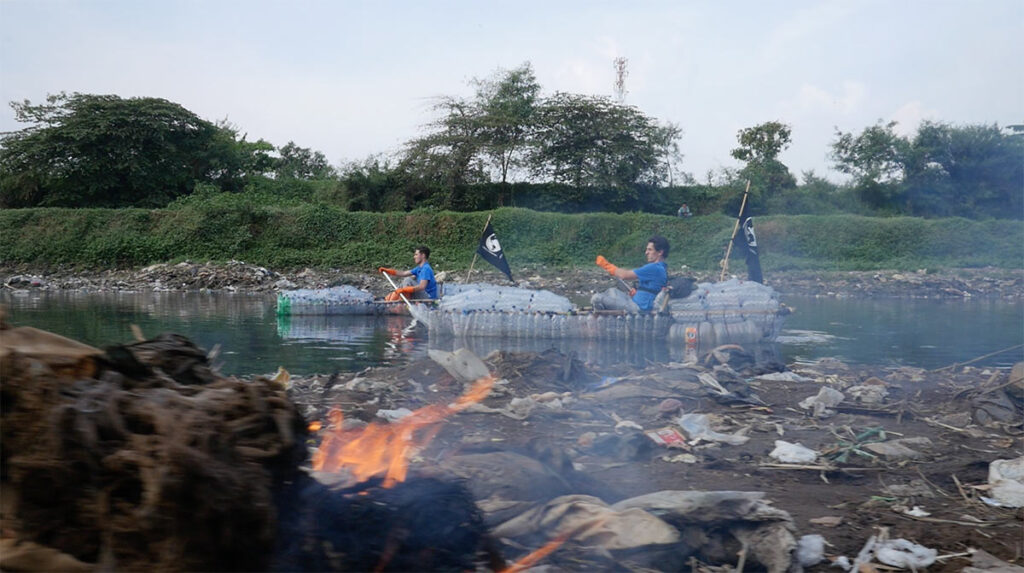 Plastics in the ocean photos in Indonesia, courtesy of Make a Change World, Gary and Sam Bencheghib, https://makeachange.world.