The leaders of the world are in need of knowing what is happening to the Earth’s life-support system and this knowledge can only come from observations that tell us how this system is changing. Not unlike a doctor, who is in need of laboratory results to come to a diagnosis, our leaders need lab results for “Patient Earth.” Not unlike a pilot in an airplane, our leaders need a cockpit for “Spaceship Earth”1 with all the panels that capture the essential variables de ning the state and trajectory of this planet that we call home.

Already in 2000, I used this analogy2 and concluded that the dashboard available to our leaders was insuf cient with many of the essential variables of the Earth system not captured, including those describing the increasingly dominant anthroposphere with a global complex economy and social structure. Unlike the pilots in a modern airplane, who have a very comprehensive dashboard (Figure 1) informing them in detail about the state and trajectory of the plane, decisions that impact the state and trends of the Earth’s life-support system are informed by rather incomplete and often inaccessible or unusable observations. 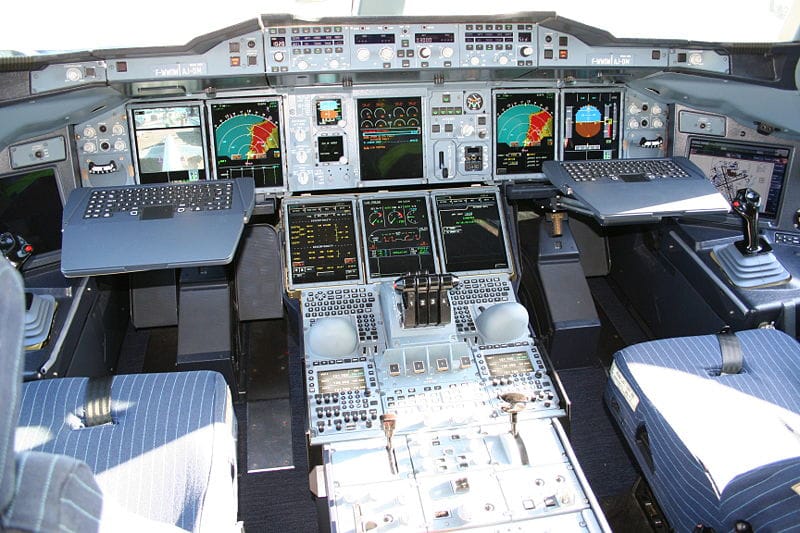 Since 1984, the Integrated Global Observing Strategy (IGOS) initiated by the G7 as a framework for Earth Observations was developed with the goal to identify the essential variables that need to be observed in order to document the changes that are happening on the planet. In 1998, the IGOS Partnership (IGOS-P) was established, bringing together major organizations in the scientific and Earth observation fields in an effort to first identify what needs to be monitored and then to implement the corresponding observing systems.

IGOS-P used a well-defined theme approach to de ne the overall strategy, which “recognises that in reality it is impossible, in one step and for all eventualities, to complete the exercise of defining all the necessary observational requirements and hence the observational systems, data handling, processing and analysis infrastructure for a comprehensive global system. The theme approach allows the coherent definition and development of an overall global strategy whilst recognising the different state and stage of development in different areas. Themes have not a priori been de ned; rather it is anticipated that the user communities will identify areas that require action and bring forward themes for agreement and action.”3 The resulting IGOS-P theme reports were excellent outcomes of the rst step de ning observational needs for societally relevant themes, but the implementation of the ndings by the space agencies and other providers did not follow suit.

When the Group on Earth Observations (GEO) was initiated in 2003 (again by the then G8) and fully established in 2005 with a ten-year mandate to build the Global Earth Observation System of Systems (GEOSS)4, I had the hope that now matters would progress towards implementation of the urgently needed cockpit for “Spaceship Earth.” Or, to use the medical analogy, I saw a beginning of building the laboratory needed to assess the health of the Earth’s life-support system, to diagnose the sickness, identify its causes, and develop a therapy.

Unlike IGOS-P, where themes emerged from a community and expert-based approach, the activities of GEO were structured according to nine pre-defined Societal Benefit Areas (SBAs) (Figure 2). This was not unlike the medical lab sheets that are structured according to different medical benefit areas of the data obtained in the laboratory. Although not perfect, the nine SBAs provided a basis for identifying the essential variables in each of these SBAs as guidance for what should be observed. 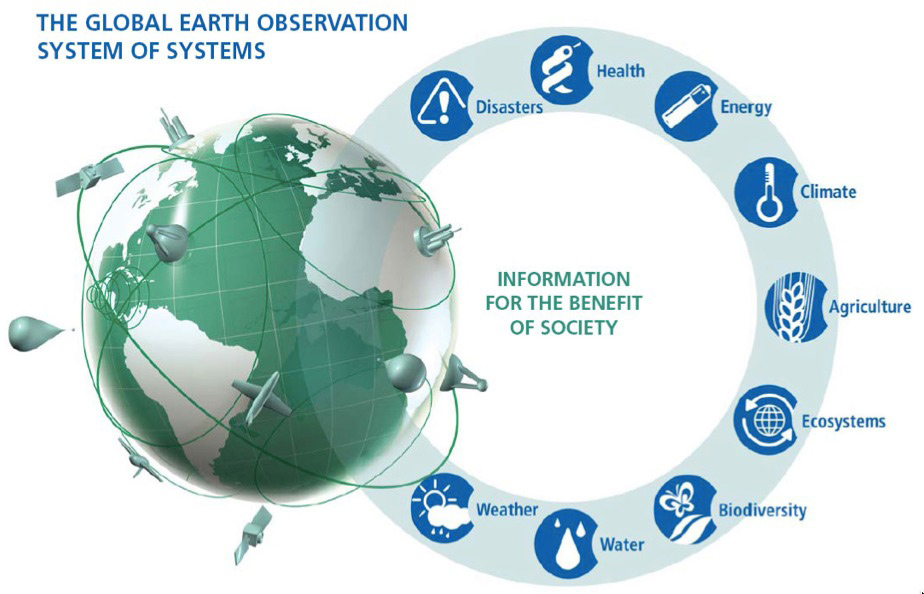 During the first 10 years of GEO, the GEO Work Plans were structured according to the SBAs. In more recent years, additional Societal Benefit Tasks were added to emphasize large areas that the nine SBAs did not sufficiently cover, including those focusing on Oceans and Society: Blue Planet,
Global Land Cover, Global Forest Observation, Global Urban Observation and Information, and Impact Assessment of Human Activities.

However, my initially very high expectation that GEO finally would make signi cant progress towards designing and implementing the dashboard for our leaders was not met: After the first 10 years, only a few of the SBAs and SB tasks, such as Climate, Weather and Oceans, have developed a more or less complete set of essential variables, while others are still far away from even having agreed on what is essential to observe.

In the transition from the first to the second 10-year plan, new people came in and facilitated changes in many aspects of GEO. New SBAs were defined (Figure 3), and they look more like the structuring of medicine than the structuring of the medical lab sheets. It appears that the new structure puts GEO in the position of the doctor, not the technician providing the lab results for all essential variables. 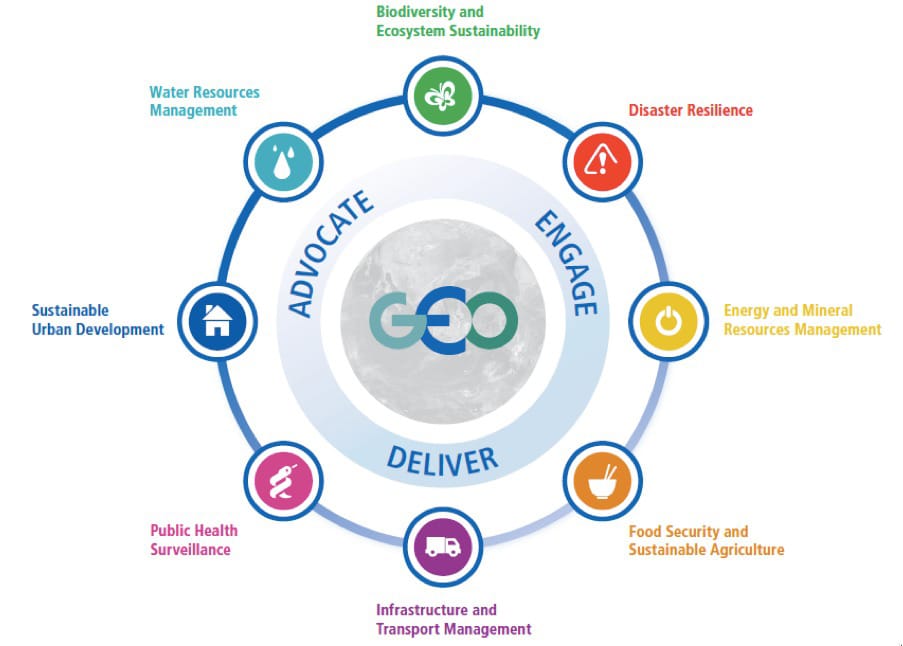 FIGURE 3.
The new SBAs de ned by the IPWG.

Moreover, the GEO Work Programme for 20165 has very little connection to the new set of SBAs. In fact, a reader would not be able to extract these SBAs from the list of Community Activities, GEO Initiatives, and Foundational Tasks collected in the GEO Work Programme. This disconnect between the declared SBAs and the planned activities in the Work Programme indicates a flaw in the strategy developed by the Implementation Plan Working Group (IPWG), the group that orchestrated the transition into the second 10 years: the new SBAs are neither connected to any societal framework nor to the way the GEO community would structure the observation landscape. One reason for this is that the broad GEO community proposing the Work Programme activities was not well connected to the process of developing the GEO strategy for the post 2015-period. This was different during the ad-hoc GEO period (2003-2004), when the first 10-year implementation plan was developed in a broad community-based process.

It amazes me how a great idea and concept that was discussed in the 1980s and 1990s was watered down and is now no longer recognizable. I rst heard of IGOS and IGOS-P in 1998 at the 27th International Symposium on Remote Sensing of the Environment in Tromso, Norway, where those involved in IGOS-P enthusiastically talked about the progress the world could expect because now the IGOS would provide a solid basis for planning the observation systems so urgently needed to inform humanity about the changes in the planet and because IGOS-P would ensure the implementation of the IGOS. Today, more than 30 years after the discussion started, nearly 20 years after IGOS-P was established, and more than 10 years after GEO was initiated, we are still far away from the exciting vision of the 1990s. The new strategy for the next 10 GEO years does not promise to change this very much.

We urgently need a global effort to design and implement the laboratory for “Patient Earth.” The concept of essential variables is a valuable path towards a comprehensive laboratory. Characterizing the main subsystems of the Earth’s life-support system, understanding the physiological processes in this system, including those that link the anthroposphere to the life-support system, and identifying the essential variables for these subsystems and processes would provide guidance for designing the lab.

Humanity’s economy is comparable to the lifestyle of an individual impacting the health of the individual. For such an individual, only a change in lifestyle can lead to significant improvements of health, but in order to see the improvements, frequent lab results need to be available. There is a crucial difference between the lab results a doctor may request to see the subtle improvements or degradation in a patient’s health and the emergency room monitoring that has the task to discover any threatening development as early as possible.

With the current rapid degradation of the Earth’s life-support system, we need both, the lab results on request, and the constant monitoring to discover new—and potentially threatening—developments. In both cases, we need to know what is outside the baseline, outside the normal variability warranting an alert. In my opinion, GEO would serve humanity best if it would design the planetary laboratory providing comprehensive observations enabling both the “emergency room monitoring” and the assessment of life-style changes on the health of the Earth’s life support system.

One major global effort to improve sustain- ability is the Agenda 2030 for Sustainable Development, which aims to reach 17 Sustainable Development Goals (SDGs, Figure 4). Wouldn’t is be great if the planetary lab was designed to provide what is needed to inform the planning of actions that would bring us closer to these goals and would help us to monitor the progress? Using the 17 SDGs to organize the Earth observation activities into societal benefit areas would connect GEO strongly to established societal frameworks. 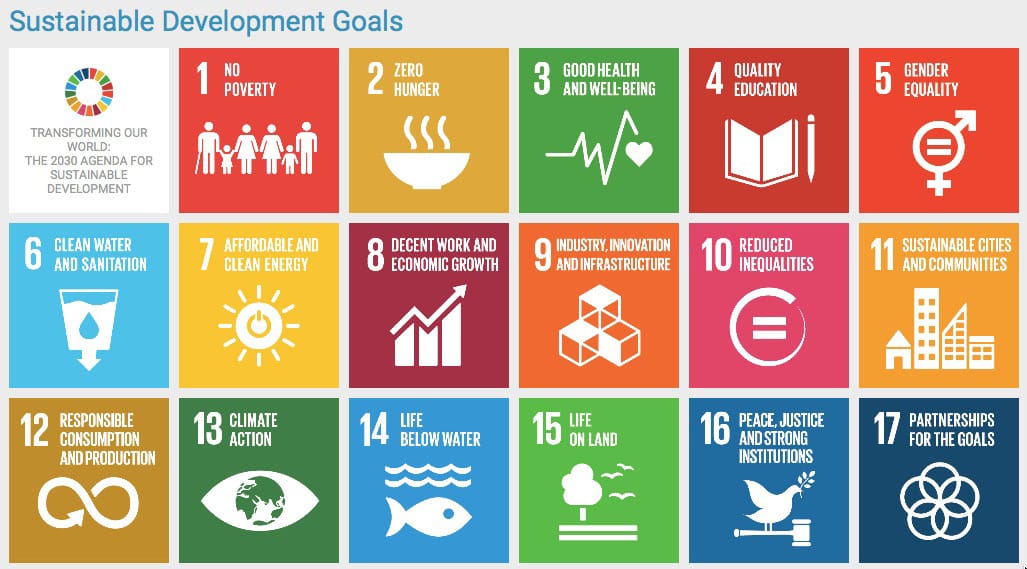 FIGURE 4.
The Sustainable Development Goals of the Agenda 2030 agreed upon
by the United Nations in 2015. From https:// sustainabledevel- opment.un.org/ sdgs.