Technology innovation is an evolutionary process where new products, solutions, and ideas are built on the theories and inventions of those who came before us. Mark Weiser, John Seeley Brown, and Rich Gold worked together at one of the nation’s most advanced technology labs—Xerox PARC. They introduced the idea of calm technology, but with each generation of technology innovation, things get forgotten. Mark and Rick passed away; John is now the only survivor of this trio.

Amber Case has made it her mission to tell their story, and make sure that their perspectives on seamless communications and preserving personal privacy in an age of connected devices and real-time information is not lost. Case is now the Director for Research and Development at Esri, and blogs regularly at caseorganic.com. She has launched the calm- technology.com website as a tribute to these great minds and to inspire software developers on the relationship between ubiquitous computing (connected everything) and people (privacy, expectations, perceptions).

WHAT IS CALM TECHNOLOGY?

Technology has become disconcerting to many people because of its complexity, and speed. Information technology is more often the enemy of calm as we are bombarded with pings and alerts. Some devices are intimidating because of the way they are designed, others because of their perceived level of information collection. But it doesn’t have to be that way. Mark Weiser and John Seeley Brown believe the difference in whether we perceive technology as agitating or calming is in how the technology (devices) engage our attention. “Calm technology engages both the center and the periphery of our attention, and in fact moves back and forth between the two,” said Weiser and Brown in an October 5, 1996 Xerox PARC research paper titled “The Coming Age of Calm Technology.”

The idea behind calm technology is to have smarter people, not things. Calm technology is a people-centric framework for developing digital products and services. It’s not an acronym, so it doesn’t stand for anything. It is a descriptor of how people should feel when they are interacting with technology. People shouldn’t feel anxious, worried, stressed, oppressed, spied upon, disempowered, agitated, or any of the many other adjectives used to describe the plight of the digital citizen today. Instead people should feel liberated, confident, empowered, relaxed, and in control when it comes to embracing the connected world.

This interview is also being published in Location Media Alliance partner LBx Journal. An additional interview is on video at www.geospatialstream.com/?p=563.

to be everywhere,   to be small, and  to be aware.

“The most profound technologies are those that disappear. They weave themselves into the fabric of everyday life until they are indistinguishable from it,” Weiser wrote.

Location data is at the heart of a connected world. Location data is what allows all of these “things” to be connected; it is what stitches together the fabric of our daily lives. Yet, like many things in life, when the data, technology, and solutions are misunderstood or misperceived, they create a backlash to the anticipated outcome.

Location data, when properly stewarded, will unleash all of its promises. Herein lies the role of Calm Technology. It is a framework for understanding our relationship with technology, and most importantly a development framework to inspire computer scientists and software developers.

Mark Weiser, Rich Gold and John Seeley Brown were at the beginning of exploring how our everyday lives would work in the future. Together and with others at Xerox PARC, they explored the future of the interface and society, and they created a miniature implementation of the future. Their work is an inspiration for all of us in the computer science field, as well as a lens and building block for determining how to develop new connected devices and information systems in an increasingly complex technology world.

WHY IS CALM TECHNOLOGY IMPORTANT FOR THE FUTURE?

Amber Case has been on the speaking circuit explaining the past, present, and future of calm technology. In particular she discusses how the same topics, issues, or technologies evolve with different names over time. For example, there have been many different marketing terms for ubiquitous computing over the years: from mainframe to grid to cloud computing, to M2M (machine to machine) to Internet of Things (IOT).

Calm technology is about the seamless communication of devices and ease of interaction between man and machine. Today all the sensors and networks are in place to realize the vision, but the systems all have different protocols. Currently, there is no easy way to connect devices. In other words, devices can’t communicate with each other because the technology landscape is so fragmented. The smartphone or tablet is increasingly working as the hub to connect various devices. We know this as an app that allows you to read sensor information from other devices installed in the home, such as the Wink or Nest, or out in the field, such as temperature and humidity sensors. But getting your Smartband to talk to your coffee machine is a whole other story.

There are efforts underway (such as AllJoyn) to develop a common language for the Internet of Things. AllJoyn is an open-source project developed by Qualcomm to standardize protocols to enable devices to seamlessly communicate with each other.

As devices become more connected, and information shared between devices about people’s behavior in the physical world are shared at an unprecedented scale, privacy protection and privacy management becomes ever more important. The design of technology influences how people perceive it. There has been a backlash on Google Glass because it just “feels and looks creepy.” However there are devices such as the Narrative Clip, which is an automatic camera and app that captures your day in photographic memory. It is similar to Google Glass in that it is watching and capturing images of others around you, but it is inconspicuously designed such that it doesn’t “offend” others. Or perhaps, the reality is that people just do not realize that they are being photographed.

The Clip takes 5 megapixel pictures every 30 seconds, connects and uploads pictures to your private library in the cloud. The photos can then be shared, searched and analyzed by algorithms into groupings and ranked according to relevance and importance. What makes Narrative Clip different from Google Glass is that it was developed according to the calm technology framework. As Amber Case said, “it’s small, the eye is off center, it has curved edges; it doesn’t look scary.” With Narrative Clip, while it snaps pictures every 30 seconds, you get to control when the data is uploaded and shared.

The NSA surveillance of ordinary citizens has demonstrated how insidious our connected world has become. To many, this was less news than shock at the scale of the blanket spying. However, computer scientists like Amber Case give us hope for a different kind of digital future: a future where individuals own and control their data; a future where technology is truly liberating and inspiring. Technologists, unconstrained by business models and investment expectations,can make this future a reality. What is clear is the digital economy that supports calm technology has not yet evolved, but I look forward to that world.

“Location data, when properly stewarded, will unleash all of its promises. Herein lies the role of Calm Technology.” 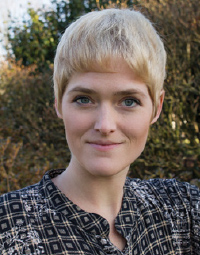 Amber Case is the Director of Esri’s R&D Center, Portland, Oregon, where she works on next-generation location-based technology. Previously, she co-founded Geoloqi, a location-based software company acquired by Esri in 2012. She recently worked on MapAttack!, an urban geofencing game based on Esri technology.

In 2012 she was named one of National Geographic’s “Emerging Explorers” and made Inc. Magazine’s “30 under 30” with Geoloqi co-founder Aaron Parecki. Case has spoken at TED on technology and humans, and regularly speaks around the world. You can follow her on Twitter @caseorganic or at caseorganic.com.