Progress, But More to be Done

WHAT IS DATA DEMOCRACY? The Committee on Earth Observation Satellites (CEOS) Working Group on Capacity Building and Data Democracy (WGCapD) was reconstituted in 2011 around this concept. It was first introduced as an idea in 2008 during South Africa’s chairmanship of CEOS and further developed in subsequent years under the CEOS leadership of Thailand and then Brazil.

As the four pillars indicate, this concept is not only about widening access to space-derived Earth observation (EO) data. Data Democracy is just as much about improving the efficacy of delivering data to end users, proliferating software tools that will enhance the translation of that data into meaningful information, and tangibly developing the capacity of data users around the world to interpret and use data in their daily decision making.

Fundamentally, Data Democracy is grounded in the belief that this would be a better world if more decisions were informed by space-based EO data, and thus, we are all best-served by ensuring that data are available, accessible, and interpretable by decision makers all around the world.

CEOS WGCapD was reconstituted around these principles. The working group is proceeding in two main ways: establishing effective coordination and partnership among those players committed to Data Democracy and working toward improved data accessibility, particularly in underserved communities.

Secure World Foundation (SWF) has been involved in WGCapD since its reconstitution two years ago, thanks largely to its partnership with the U.S. National Oceanic and Atmospheric Administration (NOAA), current vice-chair of the working group. Recently, SWF co-hosted a weeklong workshop in Nairobi, Kenya, at the Regional Centre for Mapping of Resources for Development (RCMRD). Other workshop hosts included the Brazilian National Institute for Space Research (INPE), the South African National Space Agency (SANSA), NOAA, the U.S. Geological Survey (USGS), the U.S. Agency for International Development (USAID) and the National Aeronautics and Space Administration (NASA) SERVIR program.

The workshop brought together 12 participants from East African countries to discuss digital elevation models (DEMs), to train on a wide range of hydrological modeling software (most of which was open source), and to deliver newly-released 30-meter data from the Shuttle Radar Topography Mission (SRTM). It was inspired by an opportunity to share new and useful data with end users. For those countries particularly prone to flash floods, the data can enable decision makers to better predict and respond to these devastating natural disasters. This truly international, collaborative effort was a very tangible expression of the principles of Data Democracy and the WGCapD goals. 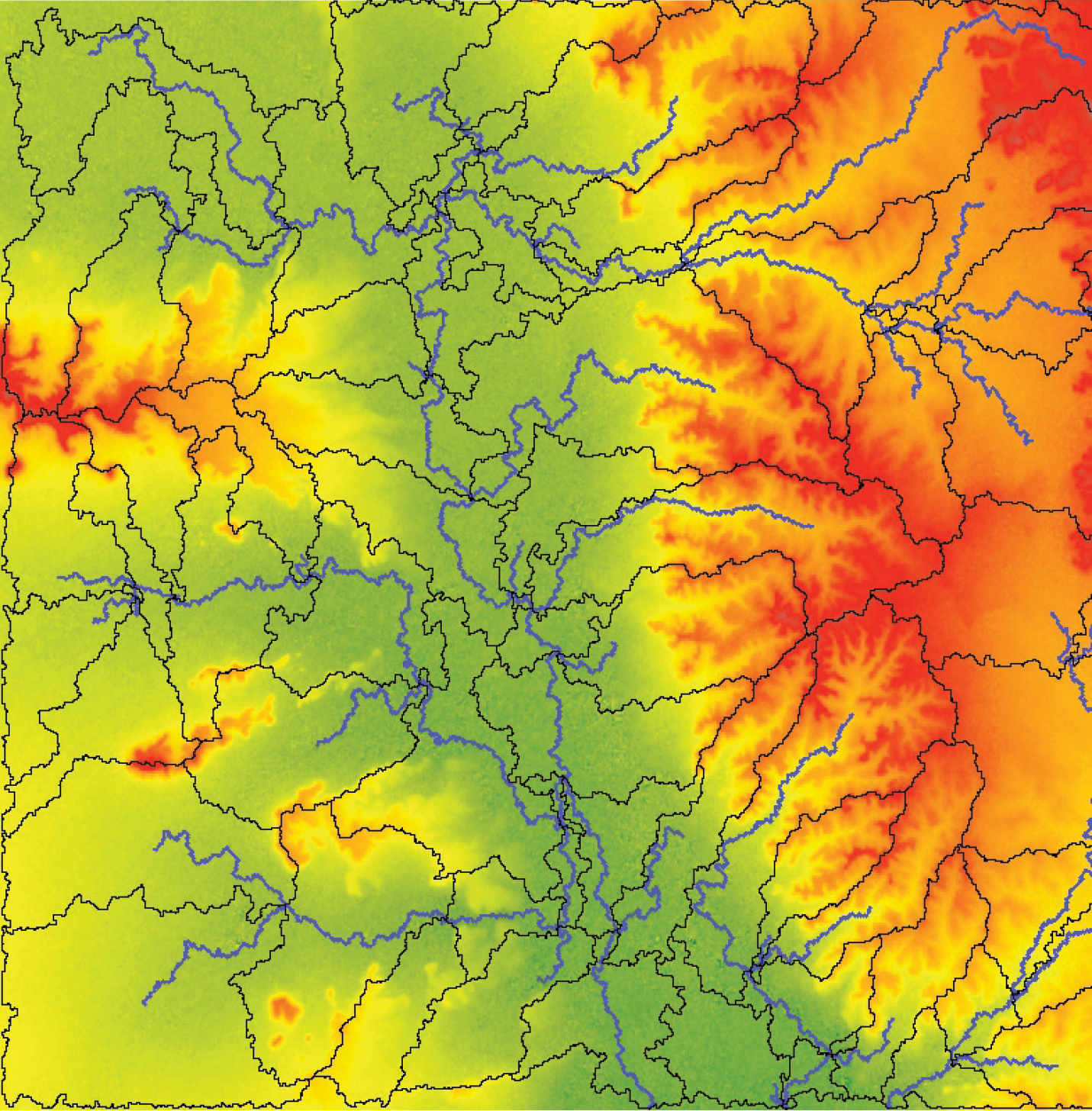 FIGURE 1.
Watersheds (in black) and drainage (in blue) from SRTM30.
In colors from green to red, green starts from 150 meters high, to reds at 397 meters high.

Nevertheless, one major element was missing for this capacity-building effort to be considered an unequivocal success. Not all of the participating East African countries were able to receive the 30-m data, which are widely regarded as the most comprehensive and highest quality elevation data currently available, but it is only publicly available for the continental United States. Since the SRTM mission in 2000, the U.S. National Geospatial-Intelligence Agency (NGA) has kept much of the raw data out of the public realm, but seeing the importance of the humanitarian and sustainable development applications of the data, NGA has recently opted to release some of the 30-m data and is considering releasing additional data in the near future.

NGA has been working with NOAA, as the DEM project lead, to release the 30-m data through the WGCapD. The prospect of a wider release was a major driver for the first workshop in what all hope will be a series. The WGCapD was able to deliver the SRTM 30-m data to participants from South Sudan and Somalia at the Nairobi workshop.

Unfortunately, because of the time-intensive coordination across multiple U.S. agencies on the release of the data, some of the participants left without data for their respective countries. While the participants agreed wholeheartedly that the training they received during the weeklong work- shop was beneficial, what they really wanted was to return to their countries and their day jobs with the higher resolution elevation data in hand.

I had the opportunity to be personally involved in this workshop from inception to completion. I was fortunate to observe firsthand as the participants realized the potential of the data and associated software tools on which they were being trained. I also had to field questions from all of the non-Somali and non-South Sudanese participants wondering when they might receive the 30-m data for their own countries. As it turns out, “red tape” is a universal affliction and most participants were satisfied knowing that the U.S. agencies involved were supportive of the release, but were still working through bureaucratic hurdles.

Personally, there were two main takeaways from the experience . First, I feel so fortunate to be working for SWF and with the other  WGCapD members towards the Data Democracy goal. I would venture to say that the EO community has come a long way in pursuing these principles, in freeing up satellite EO data and sharing expertise so that maximum benefits can be derived from them. There are many who would never believe that a national intelligence agency would go to such great lengths to share data purely for humanitarian purposes.

Second, while we have made significant progress, more can and should be done in the realm of Data Democracy. This project needs to be seen to completion, for example. There are at least a handful of countries in East Africa patiently 30-m data that they now have the training and tools to use-not to mention that WGCapD would like to replicate the experience in other regions and underserved communities around the world.

Further still, there is an opportunity to follow suit with more advanced elevation data. WGCapD is an ideal forum through which other countries and government agencies can make data more accessible for humanitarian purposes. Finally, we can all continue working toward a future where the principles of Data Democracy are taken as a given, rather than a new way of doing business that cannot be achieved without challenging bureaucratic hurdles.