The work to recover and rebuild following an earthquake requires reliable information on the condition of structures in the affected areas. In developed areas, efforts to gather this information can be time-consuming and prone to errors, often resulting in incomplete or inaccurate information.

A new, software-based methodology to recognize collapsed buildings utilizes classification of satellite images combined with height variation information. The methodology was demonstrated in a full-scale, real-life scenario by a team led by Prof. Valerio Baiocchi of the University of Rome. According to Baiocchi, the teamís work was intended to demonstrate the methodology on actual data available for the entire city of LíAquila in the Abruzzo region of central Italy, in an actual and complete simulation of quick damage assessment in a real emergency. The team utilized satellite imagery of the city of LíAquila, which experienced a magnitude 6.3 earthquake on April 6, 2009. The work demonstrated a robust classification of collapsed structures that was completed quickly and with good confidence.

The first part of the process entails classification of remotely-sensed objects. Data were obtained from monoscopic, very high-resolution imagery taken by the WorldView-2 satellite in August 2010. Height information came from a digital surface model developed from imagery acquired by the EROS-B satellite in April 2009, just a few days after the main earthquake. The pansharpened images were orthorectified using 22 ground control points established by GNSS and a digital elevation model from existing Abruzzo regional cartography (CartaTecnicaRegionale, or CTR). The study region was then broken into nine 2.3 km x 2.3 km subsets.

As it is well known, during the Haiti event it was not possible to detect quickly all the collapsed buildings from aerial and satellite images. Local authorities needed to ask for the help of volunteers for a manual identification of collapsed buildings. For this reason, our automated methodology was utilized exactly as in a real emergency situation.

The data were first processed using the object-based solution, which is based on the idea that the important information necessary to interpret an image is not represented only in a single pixel, but in meaningful image objects and their mutual relationships. Rather than classifying single pixels, the object approach uses a bottom-up, region-growing technique to create groups of pixels (known as segments) that possess a certain level of homogeneity in scale, shape and color.

Initial processing used NDVI (Normalized Difference Vegetation Index) to assign objects to the vegetation class. A similar process was used to reduce risk that shadowed parts of buildings might be eliminated from processing. See Figure 1. 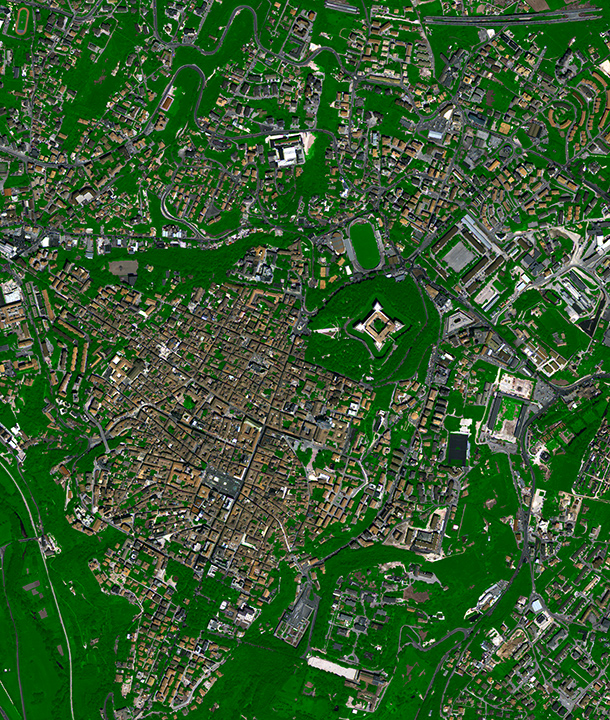 Other hierarchal classes were handled using nearest-neighbor classification techniques.
The classification required 30 to 60 minutes per subset, which can be scaled by parallel processing. The produced vector files of building polygons were overlaid on the rectified satellite images.

A second round of classification utilized pixel-based approaches in NDVI and nearest-neighbor processing. Both sets of results were compared to the CTR cartography provided by the Arbruzzo regional administration. The comparison was done using the visible surface area of building roofs. See Figure 2. 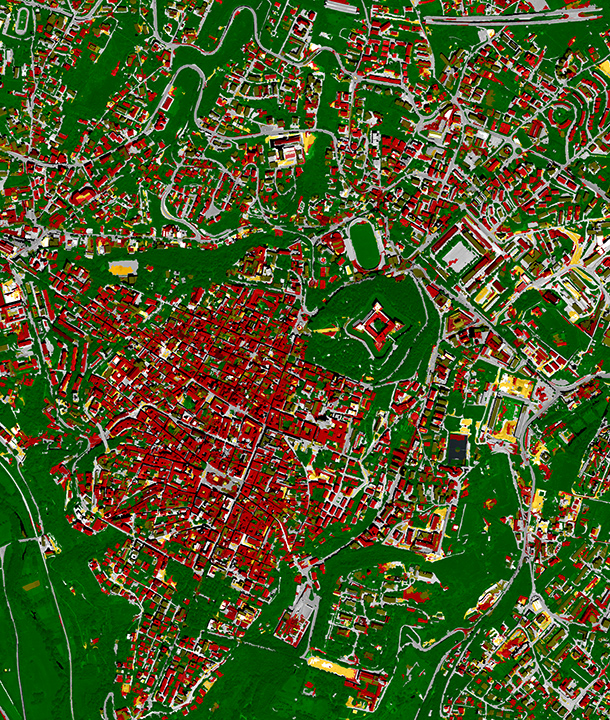 FIGURE 2.
Classification results (object-oriented approach) on some subsets (red for buildings, gray for streets, green for vegetated areas, and black for shadows)

The eCognition process recognized 93 percent of the known building areas, while the pixel-based process could recognize 64 percent. This result demonstrated that the object-oriented technique provided information that is more accurate and robust than the pixel-based approach.

When the vector file produced by eCognition was overlaid onto the satellite images, it was possible to quickly identify areas where buildings had collapsed in the quake. Because of this result, only the object-based classifications were used in the subsequent steps of the process.

Next, digital surface models were developed using pre- and post-quake imagery from EROS-B. Comparing these models exposed height differences of buildings before and after the earthquake, and a color-coded model was developed to highlight significant differences. These data could then be combined with the existing cartography.

Using building polygons identified by eCognition, locations where the height differences might be the result of a building collapse (as opposed to changes in height in areas where no buildings existed) could be identified. The data enabled users to readily identify all buildings in the study area that had collapsed as a result of the earthquake. See Figures 3 and 4. 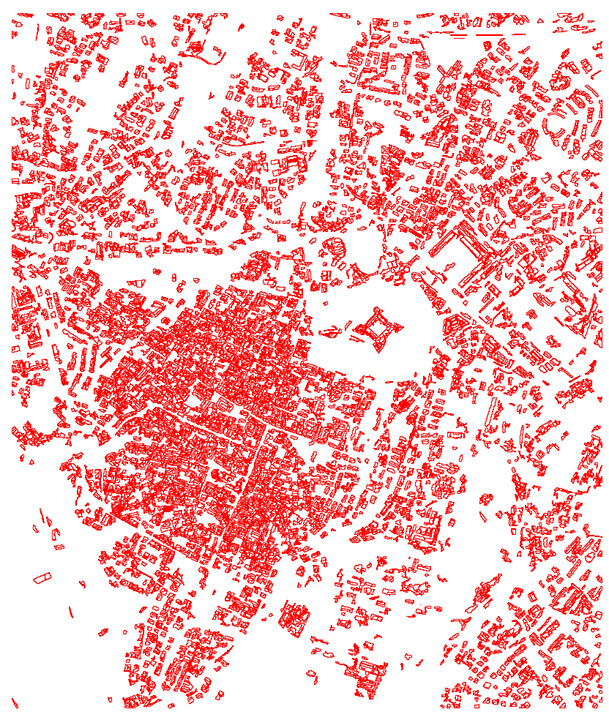 FIGURE 3.
The vector file of buildings obtained after the image classification. 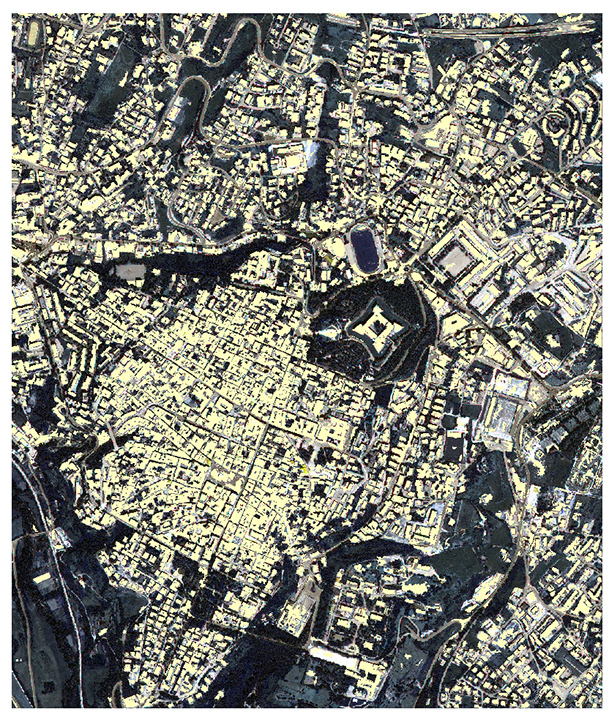 FIGURE 4.
The same file overlapping to a satellite image.

The project demonstrated that the use of a high-resolution, object-oriented classification image combined with digital surface models can produce accurate, robust information on changes in buildings in post-seismic scenarios. The object-oriented approach produced results superior to pixel-based methods. The process may be further improved through optimization and improved specialization of the classification rule sets.

To be effective, organizations must maintain accurate pre-event data. Similarly, the methods require the availability of high-performance hardware and software to quickly execute classification and DSM extraction in immediate post-quake events. The methodology could allow a first damage assessment to be performed quickly in a completely automated way through the use of remotely sensed data, thereby offering ready support for the emergency response activities carried out by humanitarian agencies with little or no error.

Baiocchi summarized the importance of the teamís work: ìQuick assessment of damage, particularly in earthquakes like the one that occurred in Haiti in 2010, can help to save potential victims buried under debris. Rescue operations need to know the location of collapsed buildings within hours to aid in rescue of trapped persons. As it is well known, during the Haiti event it was not possible to detect quickly all the collapsed buildings from aerial and satellite images. Local authorities needed to ask for the help of volunteers all over the world for a manual identification of collapsed buildings on the images. For this reason, our automated methodology (obviously faster than manual recognition) was utilized exactly as in a real emergency situation. By assessing the performance using real data, it has been confirmed that it can be used for future emergency situation.