The maps, current and others projecting a decade, a quarter or half century and more ahead, are alarming, no matter what the cause of that alarm.

Louisiana loses 30 miles of wetlands to the Gulf of Mexico every year – a football field every 37 minutes. Eighty-one miles of roadway from Miami-Dada County to Palm Beach, Fla., would be under water if sea level goes up one foot, and it’s forecast to rise as much seven inches in the next 15 years, two feet by 2060,  according to the Southeast Florida Regional Climate Change Compact.

The Navy is spending $460 million to replace or upgrade 14 piers already degraded by rising tides in Hampton Roads, Va., according to the World Resources Institute. Dennis Bushnell, chief scientist at NASA’s Langley Research Center, forecasts sea-level rise that will make “the waterfront hotels in Virginia Beach hazards to maritime navigation.”

A 2014 report by Responding to Climate Change in New York, being used by the New York State Department of Environmental Conservation, predicts a sea level rise of as little as 15 inches at the low end of the spectrum, but as much as six feet at the high end by the end of the century. Six feet is the approximate amount of water driven by a Category 2 hurricane. When it moved ashore in nearby New Jersey, Hurricane Sandy was a Category 2 storm.

The World Health Organization says seven million people a year worldwide die because of the effects of air and water pollution, the cause of climate change and sea-level rise, according to the proponderance of scientists who have studied the issue.

More and more data come in about the effects – if not always the causes –of sea-level rise and air pollution, and itís becoming clear that studying those effects to trace them back to their causes is something the Geospatial Community is well equipped to do. The community plays in the big-data analysis ballpark, using tools developed for the military in its migration from single-source intelligence to multi-modal data gathering and analysis, and enhanced by industry that is finding new ways to use geospatial information to drive its bottom line.

It’s more than just let’s-chart-sea-level-rise-and- see-what-we-can-deduce-from-that, though that is certainly part of the answer. It’s about applying what the military has done in combining layers of data from signals intelligence, even social media, on the ground; to levels of sensors carried by Unmanned Aerial Systems; to satellite imagery, all amalgamated to offer a picture called situational awareness in near real-time to soldiers on the ground whose lives depend on it.

In some ways, studying pollution and sea-level rise is easier because the time pressure isn’t as acute. But in other ways it’s harder, because miscalculations can cost us the Earth.

In the military, data is more concentrated, because wars tend to be fought in regions. Even World Wars are a mixture of regional conflicts. But studying sea level rise and pollution effects on the environment shouldn’t be limited to regions, though it’s being done that way in many places. Impacts of pollution in China in its rise in Gross Domestic Product from $1 trillion to $10 trillion (U.S. dollars) in 17 years can be felt by its neighbors and in the United States. Ice melt at both poles impacts sea levels thousands of miles away. The issue is global, and requires worldwide attention and massive big-data analytical capability.

So, then, big data gets bigger, and the analysis becomes more complex, taxing tools and technology that the geospatial community has become adept at developing in a solutions-driven continuum.

The volume of data can be staggering. DigitalGlobe’s WorldView-3 satellite, launched in August, can collect images on 680,000 square kilometers of the Earth every day and sends 1.2 gigabytes of data back to the planet every second.

Lidar and 3D imaging measure vanishing ice sheets to determine how they will feed the sea. Weather forecasts are ongoing and constantly changing worldwide. NASA’s “A-Train” constellation of six satellites carrying 15 sensors has been sending back data for more than eight years. The sensors overseen by the National Oceanic and Atmospheric Administration (NOAA) are in a constant state of flux, and the data they send out is too overwhelming to be analyzed in one place by one organization, so much so that universities, commerce and other entities are welcomed to use it for analysis.

That’s just U.S.-based sensors, their numbers being spurred at least in part by the publicity and political pressure that comes in the aftermath of devastating storms such as Hurricanes Sandy and Katrina.

Much of the rest of the world is coming on board.

WORKING IN THE DARK

But that world is a big place, and at times it seems scientists are feeling around in the dark about climate change, much as the parable of three blind men in a room, each touching a different part of an elephant and trying to come to a consensus about the animal’s identity.

In the case of sea level rise and pollution, about climate change, you can get 100 scientists together and each can offer different answers to various parts of the issue because of their varying fields of study. It’s a scenario often seized upon by skeptics, and by politicians who control the wherewithal necessary to conduct a comprehensive, definitive study of the issue – not just of its effects, but also the causes.

It’s time for a more concentrated effort, with big-data analytics harvesting input from an army of sensors – an effort much like that used to map the human genome to determine causes of genetic-based illnesses and diseases and allow us to grow closer to eradicating many of them.

“David Lary has determined that, if the world were a village of 100 people, 32 would be breathing polluted air on a regular basis.“

David Lary is analyzing big data at the University of Texas-Dallas with his THRIVE (Timely Health indicators using Remote sensing and Innovation for the Vitality of the Environment) program that charts sources and predicts effects of air pollution. Using the World Health Organization figures of seven million deaths a year because of pollution, and other figures showing that 25 million Americans have asthma problems that are exacerbated by air quality, Lary has enlisted help of the Veterans Administration as well as various hospitals and other sources of the medical community to chart pollution trends, trace their sources and use big-data analytics to predict areas of diminished air quality.

He has determined that, if the world were a village of 100 people, 32 would be breathing polluted air on a regular basis.

“For asthmatics, the difference between an ordinary day and a very bad day can be a trip to the emergency room,” he said in a 2014 presentation at US Ignite. With that in mind, he is trying to use data to help hospitals know when to increase emergency room staffing to deal with anticipated pollution-caused asthmatic attacks, to alleviate suffering and quite possibly save lives.

The study can be extended, Lary added, to include fire and drought applications.

The military can be impacted in both, because of its involvement in disaster relief and the extent to which drought can drive population migration, a potential match to ignite armed conflict. About 40 percent of the Earth’s population lives within 60 miles of the planet’s coastlines, according to the United Nations. With rising seas driving people inland, and with drought-stricken land awaiting them, the path to conflict is littered with landmines.

So, too, is commerce potentially impacted. Without remedy, land losses to sea level rise and erosion would include the “boot” of South Louisiana by the end of the century, according to interactive, layered maps generated for The Lens and ProPublica. That land includes half of the United Statesí petroleum refineries.See Figure 1. 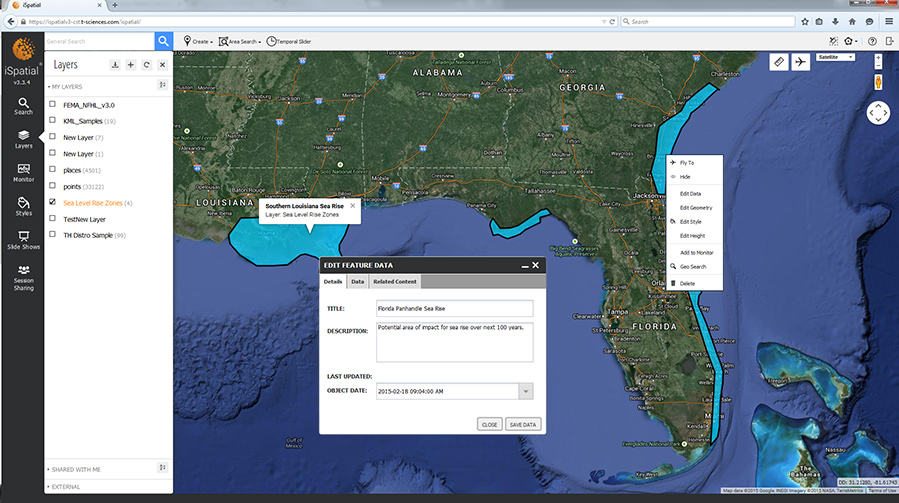 FIGURE 1.
This screen shot shows possible sea- level rise in the southern U.S., with affected areas in the Florida panhandle and Louisiana. This is a mock-up of zones around areas where there could be encroachment of the ocean over time, from iSpatial, a product of Thermopylae.

The need for computing capability to drive geospatial big-data analysis can be fed by a concept called the ìIndustrial Internetî by General Electric. The Industrial Internet refers to integration of a vast network of sensors and software and the tools to make them work together to find solutions.

That capability also can be fed by the Internet of Things, in which an array of sensors is created as parts of the devices they drive, from appliances to service-related products. Lary sees asthematics becoming individual sensors to monitor the causes of outbreaks. The military operates on a mantra, “every soldier a sensor.”

“Without remedy, land losses to sea level rise and erosion would include the “boot” of South Louisiana by the end of the century, according to interactive, layered maps generated for The Lens and ProPublica. That land includes half of the United States’ petroleum refineries.“

Smartphones are getting smarter and more prolific. There are two billion in use worldwide now and their number is forecast to be six billion by the end of the decade. Apple sells more iPhones every day worldwide (378,000) than there are babies born (371,000). Those smartphones carry a GPS chip and can be sensors to help monitor environmental change.

So data comes from more sources and in more directions. It is growing faster than the combined means to exploit it.

Geospatial is a huge part of the solution. So, too, is the Internet and Social Media. New and emerging techniques become tools to assist in developing and solving the problem.

On the horizon, you’re going to see industry – utilities, electrical, oil and gas, transportation, rail, maritime– pushing the highwater mark of the Internet of Things and the Industrial Internet. As they do that, they are going to have to increase their investment around solutions dealing with big-data analytics to get value from all of that data. Efforts such as solving the issues surrounding climate change are going to be beneficiaries of that investment in new technology, because the questions are similar. 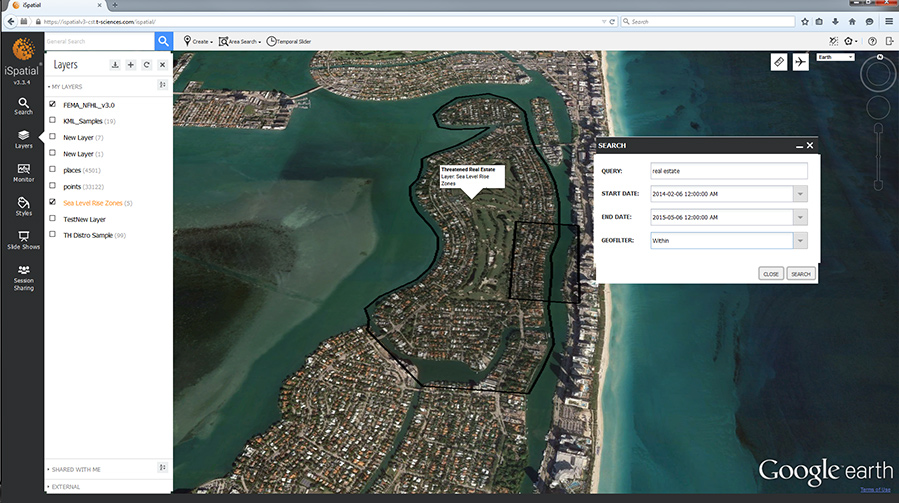 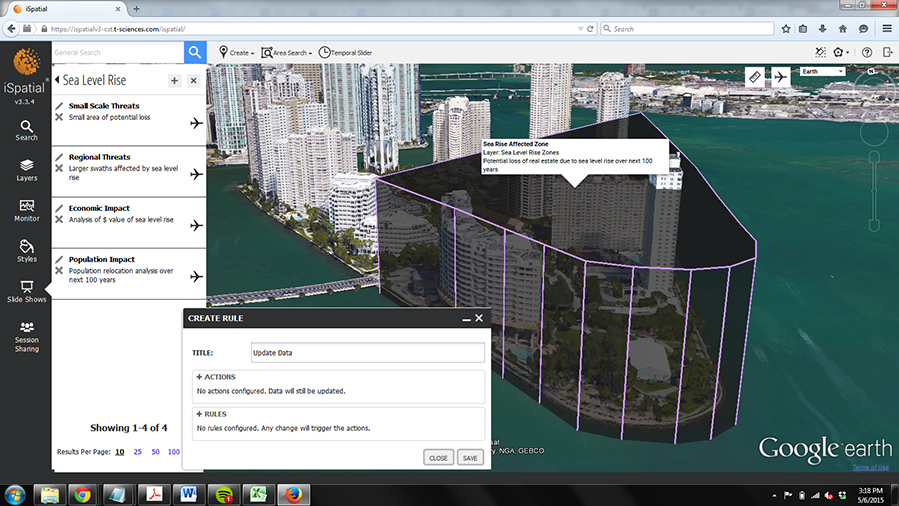 WE’RE IN THIS TOGETHER

The global economy has global problems. So does the global environment, and the two are meshed in ways that are becoming inseparable as new treaties are forged to handle international commercial competition. Environmental concerns have become part of these agreement negotiations, which means that verification means also are going to have to become a part. Those means will have, at their root, the kind of big data analytics that have become the technological foundation of the geospatial community.

What can make it all work is an understanding that the problems are scientific, before they are political, and scientific problems don’t have to be like people in a dark room trying to identify an elephant by touch. You can turn on the lights with scientific problems, and big data analysis spawned by the geospatial community can be the switch.

It can bridge the maps of the present with those of the future, helping determine why the present is the way it is, and how society can make that future better.The global economy has global problems. So does the global environment, and the two are meshed in ways