For six years, UrtheCast has been an emerging leader in the democratization of Earth Observation (EO) data by fusing EO with geoanalytics. Now, the symbiotic relationship between those two worlds is strengthening, and rapidly changing the way industries use geospatial Big Data.

“Earth Observation is heading towards a model where all data is immediately available, and where all analysis is performed in near real-time as the data is acquired,” says Dr. Keith Beckett, Chief Scientist at UrtheCast. “The distribution of imagery analysis results is now being streamlined straight into users’ hands, ready to be put to work.”

With one of the most diverse sensor systems in the EO business and with plans for two revolutionary constellations—UrtheDaily and OptiSAR—UrtheCast continues to eliminate barriers to actionable Big Data analysis, allowing for stronger connections between EO, GIS, data analysis, and their myriad market applications.

Many of those applications have worldwide impact, for both current and future generations. 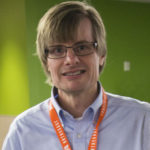 “There are two very clear catalysts emerging that are driving that exponential growth,” explains Beckett. “First, it has been enabled by the commodification and mass production of low-cost and, perhaps more importantly, low-power, sensors and processors. This is largely thanks to today’s powerful smartphones.” Within remote sensing and geoanalytics industries, the merging of technologies will be key and will snowball even more in the next five to ten years. 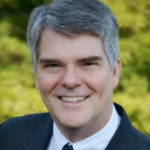 “As computing power grows according to Moore’s Law, the technological leaps needed to operate on Big Data will, without a doubt, be pushed far harder than Gordon Moore ever envisioned,” adds Beckett.

Innovation in tech enables innovative market applications. As capabilities and connections between technological components increase, the focus shifts to the production of actionable insights, for all EO companies.

“Ultimately, most of the geoanalytics market value will be garnered by the winning value-add propositions and not the supporting imagery and data sources,” says Downen. “There’s no doubt the geoanalytics value proposition now enjoys greater reach and applicability to a broad range of vertical markets, such as precision agriculture, which are just recently realizing the power of satellite-based remote sensing. As a result, the R&D frontier has begun shifting from hardware technologies to the Big Data and deep learning algorithm development arena.” 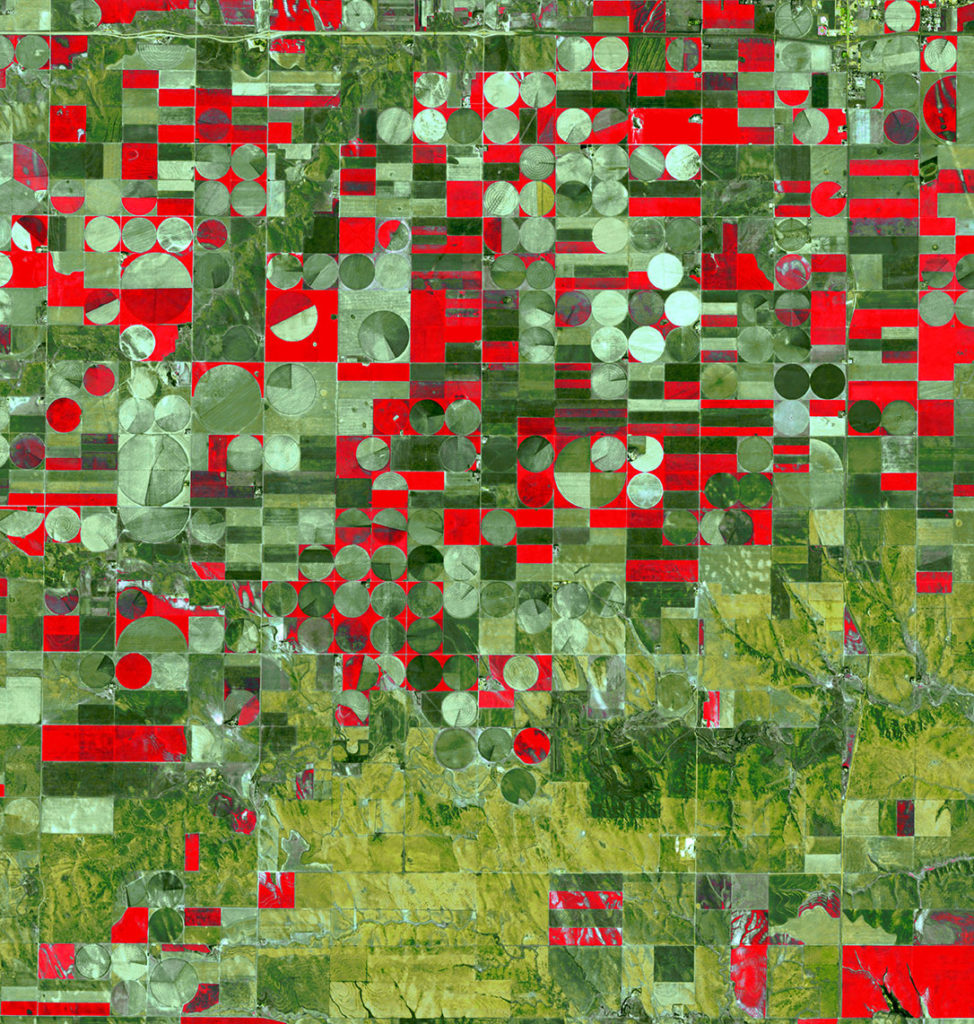 With the right tools, organizations large and small can power industry-wide and global-scale change. Accessibility will drive that. And it’s not enough that we have a Big Data boon in EO; the world requires high-quality data. “The other reasons for that dramatic shift are the needs of rapidly expanding markets like agriculture, forestry, energy, water management, and insurance, which are all looking to Big Data to supply better, faster, higher-quality and cheaper actionable information,” explains Beckett.

There are key industries driving that change which other markets will soon be able to harness as well. It’s industries like agriculture and crop insurance that have the right ecosystems necessary to further this change, says Beckett. “The competing demands of population expansion, of reductions in the amount of arable land available as cropland is converted to other uses, and of pressures of climate change collide. Other industries are looking to predict retail activity by counting cars in store parking lots, estimate oil reserves by inspecting storage tanks and monitor containers at shipping ports and rail yards. These are several examples of geoanalytics services already supporting various marketplaces.”

Connective innovation is bringing remote sensing into the Big Data revolution. It’s not only iteration and innovation that are driving change; it’s combining technologies in ways that solve problems and create new models.

“In the same way that many unrelated technologies were integrated together into the creation of today’s smartphones, the future of Earth Observation and
geo-analytics will involve the seamless integration of a wide range of technologies,” explains Beckett. “We can already see how the Internet of Things (IOT) and remote sensing are converging, with technologies combining in ways that we could only dream of a few years ago.”

UrtheCast’s sensor system is one of the most diverse in the Earth Observation business, and that brings a range of capabilities, including heightened analysis for precision agriculture.

The planned UrtheDaily and OptiSAR constellations are being designed to be the next purveyors of large-scale problem solving—as the global agricultural stakes are raised, as the population balloons, so too does the need for increased access to extremely high-quality imagery, on a reliable and frequent basis.

“Precision agriculture using Earth Observation and geoanalytics is operationally being used to optimize crop production by strategically applying just the right amounts of nutrients, herbicides, pesticides, fungicides and water, and to apply them at just the right time when they are needed most.”

Already, UrtheCastís Deimos-1 sensor has been a workhorse of the agricultural and forestry industries by providing regular monitoring services across the United States, which allows for high-quality multi-temporal analysis. Deimos-1, together with its sister satellite UK-DMC-2, is used to deliver cloud free imagery roughly every 2 weeks to the US Department of Agriculture for critical cropland monitoring and yield estimating. UrtheDaily and OptiSAR, in combination, are expected to raise those monitoring capabilities exponentially with daily coverage and high resolutions. 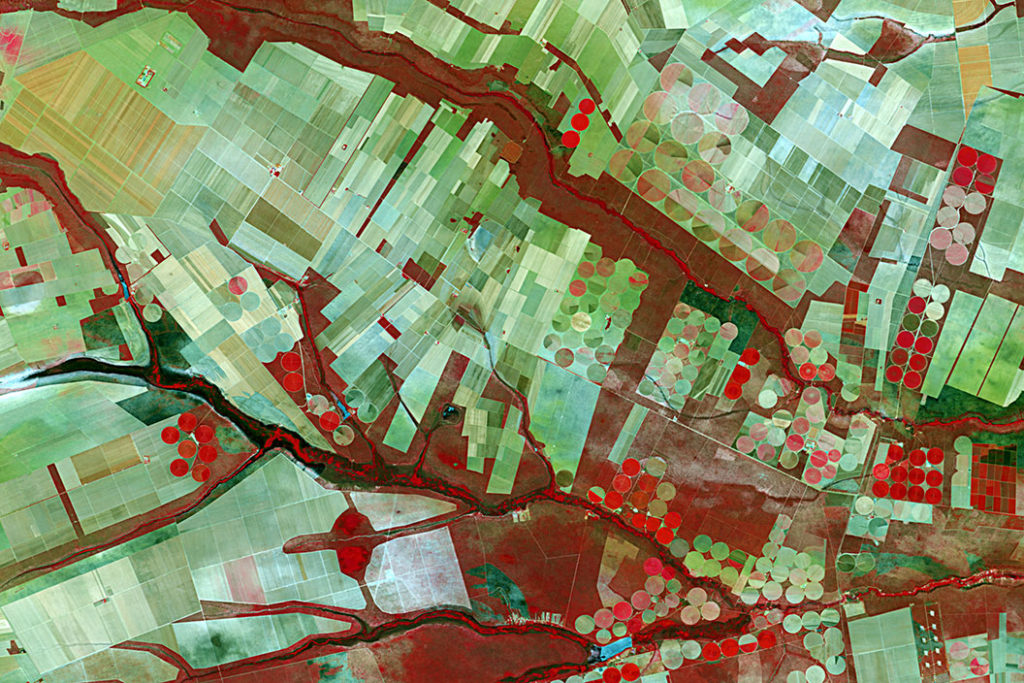 “Growers around the world are under pressure to produce greater corn, wheat, rice, and soybean yields per acre than ever before. Remote sensing helps manage land use and optimize crop yields by analyzing the entire growing cycle and recommending the precise application of precious input resources such as seed, fertilizer, water, herbicides, and insecticides,” says Downen.

From precision irrigation that results in huge water savings and crop yield increases, to early detection of crop illnesses to minimize crop damage—all areas of food production and protection stand to make major gains in the next ten years, even amid climate change realities. “Climate change, regardless of the cause, is very much real,” says Beckett. “It is invalidating many of the models and assumptions in virtually every market area.

Because the rate with which climate change is impacting these markets is rapid and difficult to predict, new models must be developed, and past assumptions need to be recalibrated just to stay one step ahead,” explains Beckett.

The ability of farmers to gain actionable insights is absolutely contingent on the use of high quality imagery, which can provide accurate measurements of what is happening in the field. “The tangential benefits are profound,” says Downen. Those include “lower insurance costs and fewer failed crops, more efficient grower operations, less water used, less chemicals applied, and less runoff into the water table and aquifer systems.” 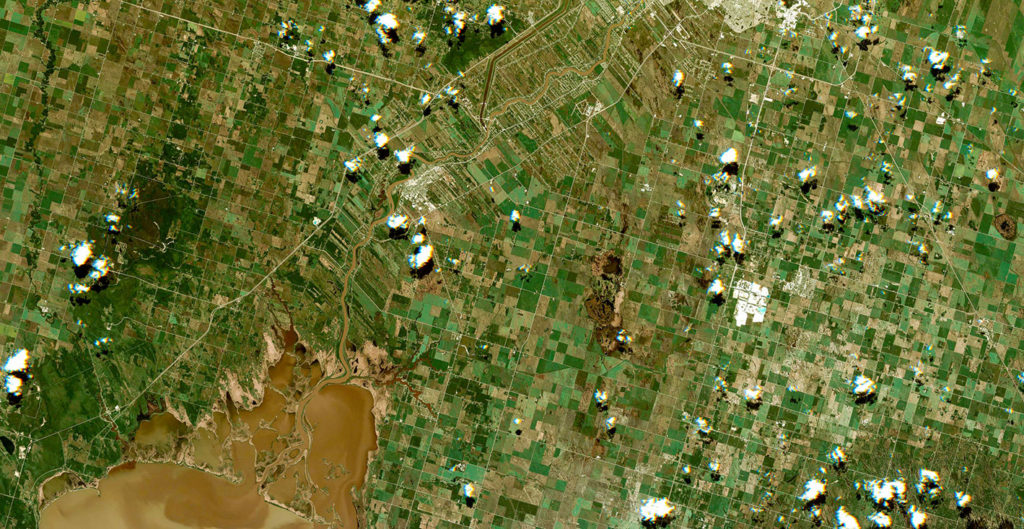 The planned UrtheDaily constellation can be best thought of as an Internet of Things (IOT) sensor capable of delivering almost 6 trillion pixels every day, Beckett explains, each one an area of five meters square, covering the world’s 145 million km2 of land. The system is being designed to observe what’s happening, every day at 10:30 a.m., across the planet’s entire land mass. “This will be the feedstock into a vast array of machine learning algorithms to analyze the imagery in near real-time and to produce actionable information for the consumer marketplace,” he says.

The two planned constellations, UrtheDaily and OptiSAR, are designed to be highly complementary, working as one. OptiSAR is designed to let users zoom in to specific areas where interesting changes have just been observed by the UrtheDaily constellation. “This will bring the much needed deeper understanding of human activity and impacts of climate change,” says Beckett.

With an eye toward speed, these new daily datasets are being designed to be delivered within 12 hours following acquisition. “The system has been designed for agricultural and change-detection applications—for planned delivery of high-frequency, high-quality data that enables geoanalytics capabilities that the agriculture industry has yet to see,” explains Beckett.

UrtheDaily is designed to be precisely calibrated and to have a long lifespan, making it a dependable, high-fidelity, long-term solution for the industry. To provide maximum coverage, the entire world’s landmass can be acquired daily, without any gaps. “That’s 145 million km2 of multispectral imagery every 24 hours. At 5 meters per pixel—the sweet spot in the trade-off between cost, resolution and useful information content—this imagery provides rich multispectral data with high radiometric and geometric quality, covering huge swaths of cropland at a consistent time of day. This means that users of UrtheDaily data can rely on having the most up-to-date agricultural information delivered to them every day within hours of observation,” says Beckett. 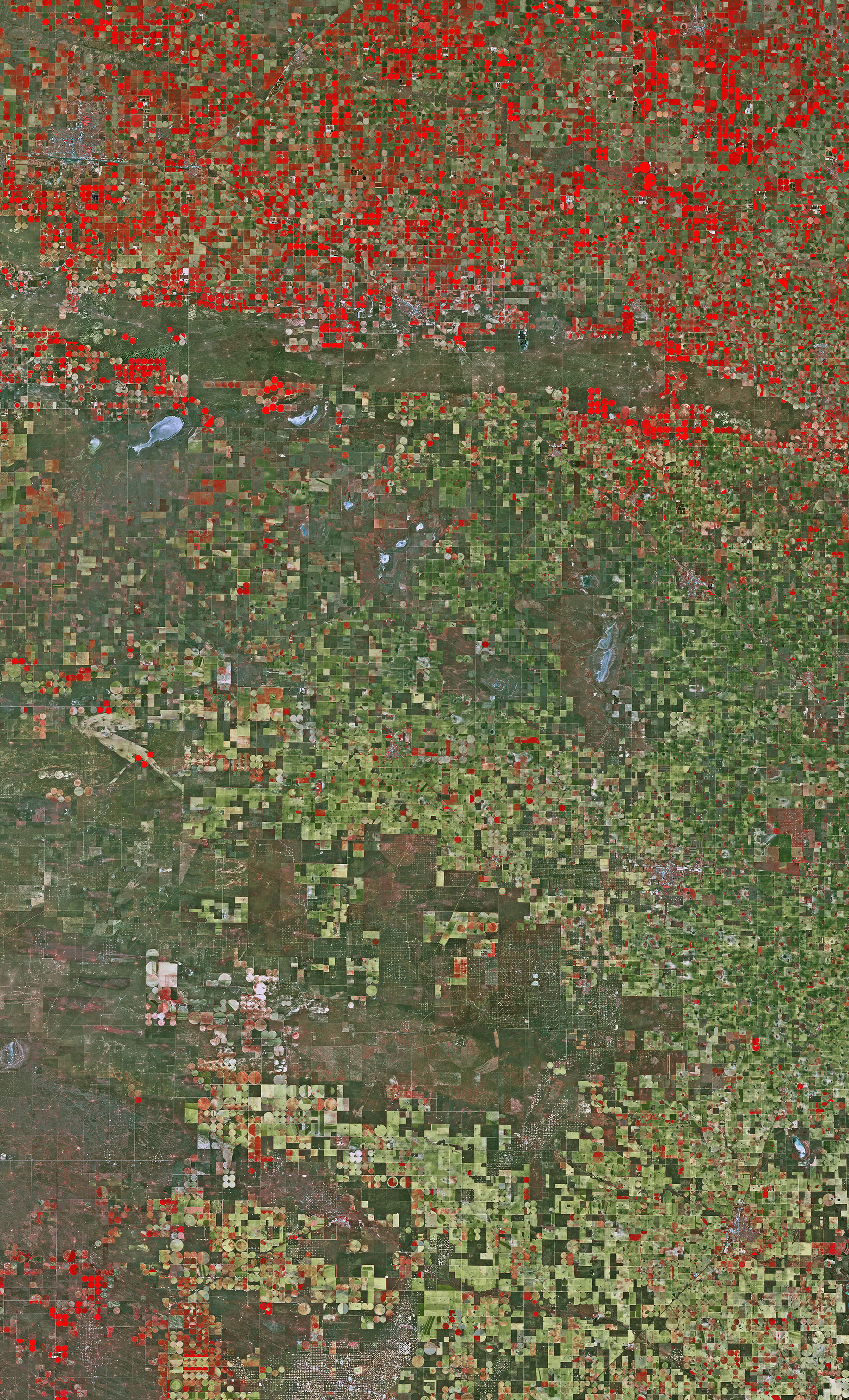 FIGURE 5. A study using Deimos-1 imagery showed the potential to save farmers in Texas signi cant watering costs per irrigation pivot over the growing season. Image captured by Deimos-1, April 14, 2016.

SCIENTIFIC DATA HAS AN ACCESSIBILITY PROBLEM

Troves of data, analysis of that data, and the resulting insights are simply not yet available at massive scale. “In virtually every resource industry, be it surface, subsurface or aquaculture development, organizations suffer the same limiting factor of inaccessible or difficult-to-understand scientific data,” Beckett explains. “UrtheCast will be instrumental by making available science-backed information through an interactive platform to all stakeholders in the resource development industry.”

To democratize it, we have to go steps beyond opening up EO, toward making that information digestible and interactive. “In that way, this science-backed information via the UrthePlatform will substantially raise the level of comprehension,” he says. Until recently, there’s been a pervasive inability to crunch and communicate data in a palpable way. Cloud computing and technological integration are changing that reality. 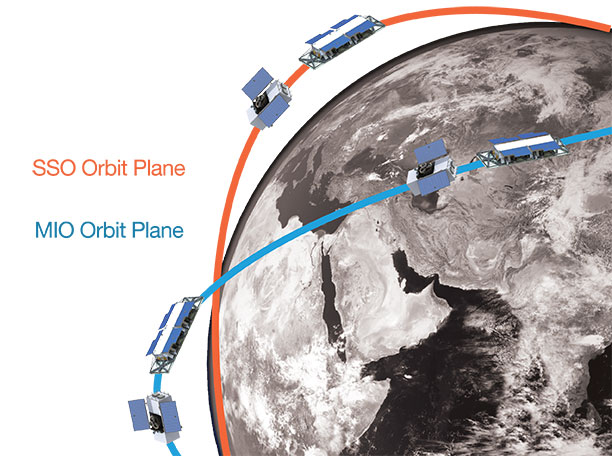 We’re only just beginning to realize the potential of open EO data. Big Data is a good start. With on-the-fly analysis on the horizon, and higher quality data being delivered, many markets and sub-sectors stand to make out well.

Although it’s only early days, already we can see worldwide impact across areas of economic, environmental and social responsibility. We’re on the precipice of what’s becoming a shakeup—and exciting inflection point for the EO geoanalytics world.