A new book by Leonard David 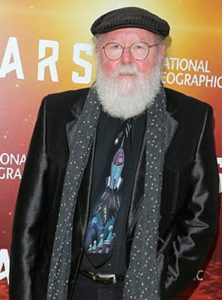 Leonard David is a space journalist, reporting on space activities for over 50 years. He is winner of the 2010 National Space Club Press Award, among many others.

Leonard is author of the book, Moon Rush: The New Space Race, published by National Geographic in May 2019.

Mr. David is also author of Mars – Our Future on the Red Planet published by National Geographic in October 2016. The book is the companion volume to Mars – a National Geographic Channel television series in its second season from executive producers Brian Grazer and Ron Howard.

Leonard is co-author with Apollo 11’s Buzz Aldrin of Mission to Mars – My Vision for Space Exploration, released in May 2013 by the National Geographic Society. A soft cover edition of the book with a new essay was released in May 2015.

In the National Geographic book, Moon Rush: The New Space Race, veteran space journalist Leonard David digs into the science and technology – past, present, and future – central to our explorations of Earth’s only natural satellite. Launched in May, the book comes out in conjunction with celebrations of the 50th anniversary of the Apollo 11 mission in July 1969 that led to the first footprints on Earth’s celestial companion.

In these rich pages, he explores the Moon in all its facets, from ancient myth to future “Moon Village” plans. He offers inside information about how the United States, allies and competitors, as well as key private corporations like Moon Express and Jeff Bezos’s Blue Origin, plan to reach, inhabit, and even harvest the Moon in the decades to come. 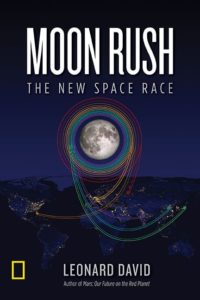 The 21st-century space race back to the Moon has become more urgent, and more timely, than ever. Accounts of new strategies are set against past efforts, including stories never before told about the Apollo missions and Cold War plans for military surveillance and missile launches from the Moon.

The volume spotlights the Moon’s available resources – particularly water, but also unique places on the lunar surface to establish a base of operations. Also highlighted is the legal framework on divvying up the Moon, a subject likely to become more heated in years to come, and which may become a head-on collision between private enterprise and other forms of governance.

Spurred on by the Google Lunar XPRIZE – $20 million for the first to get to the Moon and send images home – the 21st-century space race back to the Moon is gaining attention from all sectors. On January 23, 2018, the X Prize Foundation announced that “no team would be able to make a launch attempt to reach the Moon by the March 31, 2018] deadline… and the US$30 million Google Lunar XPRIZE will go unclaimed.”

On April 11, 2019, the SpaceIL spacecraft crashed while attempting to land on the moon. The SpaceIL team was awarded a $1 million “Moonshot Award” by the X Prize Foundation in recognition of touching the surface of the moon. Also timed with the 50th anniversary of the first moon walk is National Geographic’s book, Apollo to the Moon: A History in 50 Objects, by Teasel Muir-Harmony.

For more information on these recent releases from National Geographic, go to: https://shop.nationalgeographic.com/collections/books-space 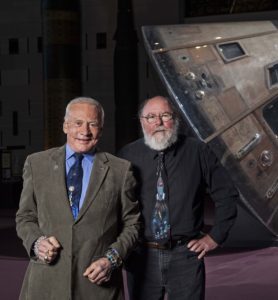 FIGURE 1
Buzz Aldrin, 2nd man to walk on the moon in 1969, and Leonard David, pictured with the Apollo 11 capsule in which Buzz flew to the moon. Credit: Eric Long, NASM. Leonard was co-author of Buzz’s book, Mission to Mars: My Vision for Space Exploration.

David will be speaking about his latest book, Moon Rush, at Denver’s celebration of the 50th anniversary of the Moon Landing, Apollopalooza, at Wings Over the Rockies, on July 15 at 10:30: https://wingsmuseum.org/event/keynote-presentation-leonard-davi