The Enduring Legacy of Howard Fisher, the ‘Grandfather’ of GIS

The Enduring Legacy of Howard Fisher

The Enduring Legacy of Howard Fisher
Posted by Jennifer Horowitz on June 15, 2020 in Summer 2020 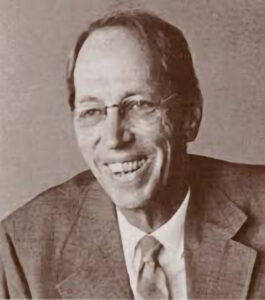 Howard Fisher, director of the Laboratory for Computer Graphics at Harvard University, 1965-1968

To truly appreciate innovation in GIS, it is essential to look at the history behind the “Science of Where,” as Esri has defined it.

Last year, I had the honor of being awarded the H.T Fisher Prize, an award given annually to an undergraduate at Harvard who exhibits excellence in GIS. Curious about the prize’s namesake, I discovered the story of Howard Fisher, widely considered a founding father of GIS, who was among the first to envision a software package that could serve as a digital mapping platform for planners in designing the layout for a given terrain. 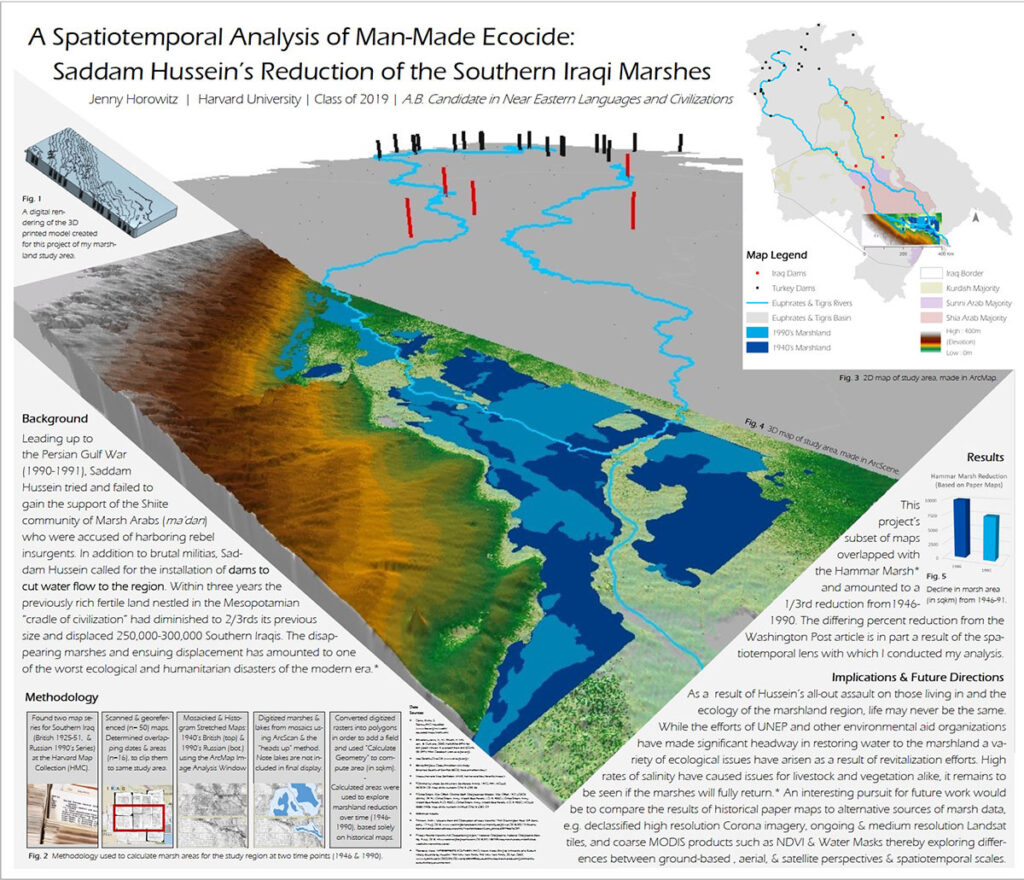 The early operating system Fisher created during his time at the Laboratory for Computer Graphics and Spatial Analysis (an antecedent to the Harvard Center for Geographic Analysis, or CGA) would have a profound impact on the software systems and platform that define the modern GIS we have come to know (and love) today. Important lessons can be learned from examining the architecture of the early software systems Fisher created, helping us to understand the transformations technology must undergo to adapt to the needs of its users.

“Fisher’s pioneering contributions to digital cartography quite literally put GIS on the map illuminating paths for geospatial innovators for generations to come.”

When Fisher first released his Synagraphic mapping program (SYMAP) in 1964, it became the leading mapping software of its time. Previously, maps were produced on paper by hand, but SYMAP moved to production assisted by computer programs, using first line printers and later pen plotters. Its popularity as a mapping software was in part a result of its ability to produce both choropleth (confromat) and isarithmic (contour) maps from regularly and irregularly gridded data. As use of the platform became more widespread and the digital mapping system was applied to more diverse environments, the software needed to transform, too. 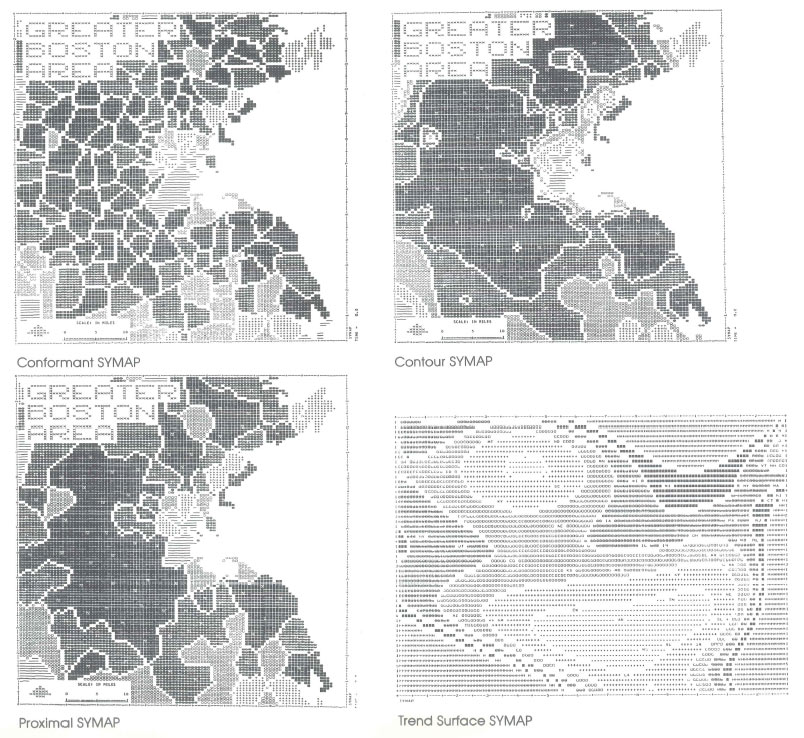 The popularity of the platform meant the software had new types of users. As Nick Chrisman writes in Charting the Unknown: How Computer Mapping at Harvard Became GIS, “Howard Fisher envisioned software packaged so that it could be used by planning professionals with a few weeks’ training by correspondence.” Fisher understood that the success of the software would come in part from its usability by those without much technical training. An important takeaway from the early system architecture of SYMAP is the underlying importance of usability for geographic modeling programs. As digital mapping platforms become seemingly ubiquitous in the modern age, they must adjust the operability and function of GIS to meet the needs of “technologically naive” laymen users in order to be market leaders. GIS must equip modern cartographers with the technical elements needed to digitally portray terrain types from the globe’s highest elevations to the depths of the ocean floor without compromising its intelligibility for the common user.

In developing the programmatic foundations of GIS, Fisher enlisted the help of open-minded professionals from a wide variety of fields from both Harvard’s Graduate School of Design (GSD) and MIT, assembling a team of economists, water engineers, and architects. The software benefited greatly from the variety of professional experiences brought to bear on its development. In those early days in ‘the Lab,’ as it was known, Jack Dangermond (founder of GIS software giant Esri), Carl Steinitz, Allan Schmidt, and Allen Bernholtz met often with Howard to confer and share ideas. As Steinitz explained, “In the first two years, the five of us would meet with Howard every week or every second week…[to discuss] ideas about what you could do with this one program and all the types of analyses that you could build.” Steinitz, who closely coordinated their work as a professor in the Department of Landscape Architecture at Harvard’s GSD and is now widely hailed as the ‘Father of GeoDesign,’ emphasized the open, receptive nature of those meetings between GIS’s founding fathers. “Anybody and everybody who was in the meeting would say, ‘Well, maybe you should do this. Try this one.’ ‘That’s a stupid idea’ was never heard.”

It was thanks to the diverse group’s experimentally minded attitudes that automated cartography advanced in leaps and bounds during this period. Similarly, it is important for modern geospatial software engineers to draw on the expertise of multiple actors from a variety of backgrounds and perspectives. Moreover, open-mindedness is vital to the design and software-building process in order to leverage the expertise of a team as a whole and develop the best product.

Steinitz himself played a pivotal role in the history of GIS with his “Delmarva study,” which questioned the need for a vector-based model. This led to further evolution of the platform as researchers decided environmental data was better represented by a grid rather than set vector coordinates, particularly as the land plots analyzed with the mapping platform became more extensive in both scale and scope.

Here is one of Howard Fisher’s techniques for demonstrating 3D mapping while working at Harvard’s Laboratory of Computer Graphics, using three dimensional blocks covered with maps of comparable slices.

Valuable lessons can also be derived from the transformations GIS needed to undergo in using and converting data types, since early issues with data processing and operability were similar to those encountered by database managers today. In 1975, the software system was changed to incorporate processors able to manage large geographic files. Thus, from SYMAP emerged ODYSSEY, a system (rather than a software program) that had many functions similar to modern GIS, like an overlay processor with advanced capacity to treat “fuzzy tolerances.” This new focus on the production of the display rather than of the database in taking in a diversity of data types would allow ODYSSEY to emerge as the precursor to POSTGIS and SQL. This is quite topical, too, as geospatial developers and designers often struggle with the interoperability of geo-datasets when melding them together for use from a multitude of geoformats.

The Delmarva Study, conducted by Professor Carl Steinitz in 1966, represented a first application of GIS-modeled evaluation in developing a geographic model for a region.

Clearly, Fisher understood it was essential to be adaptable, meet users where they were, and draw on a variety of perspectives to assemble a team capable of developing the best product. The technological achievements during Fisher’s time as director of “The Lab” are indicative of “10 years of R&D, fundamental R&D, and 5,000 years of human purposeful design,” as Steinitz puts it. This led to today’s GIS, a remarkable geospatial data science that revolutionized cartography, allowing users of all backgrounds to digitally produce landscapes in extraordinary detail.

Steinitz, reflecting on those early days at The Lab, described Fisher as ultimately an iconoclast. “He was a totally non-conformist architect… He was always an explorer.” Fisher’s enduring impact on GIS was not only pivotal to the birth of the software platform – it also yields important lessons about the need to explore, adapt, and transform. In describing the impact of Fisher’s legacy on the Harvard CGA as it exists today, Mathew W. Wilson, an associate on behalf of the Harvard CGA describes Fisher’s indelible influence on the geospatial field: “Since the founding of the CGA in 2006, the Howard Fisher Award…recognizes the achievement of Harvard students as they utilize geospatial technologies and geographical thinking to push the edges of their respective disciplines. Howard Fisher was an innovator, very much ahead of his time. He believed in the power of computing to lift humanity, to challenge tradition, and to utilize the best of our arts and sciences toward these ends.” Fisher’s pioneering contributions to digital cartography quite literally put GIS on the map illuminating paths for geospatial innovators for generations to come. 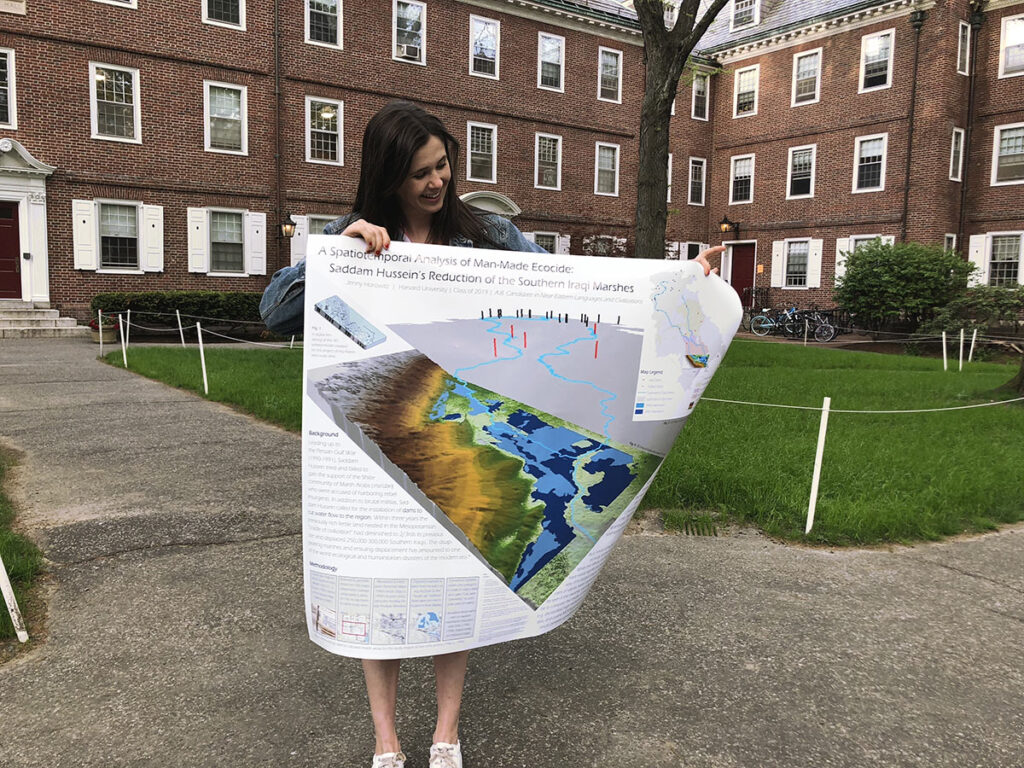 Jennifer Horowitz with the Fisher Prize submission in front of her dorm, Kirkland House at Harvard

Editor’s Note: The H.T. Fisher Prize is awarded annually to a Harvard undergraduate who displays excellence in GIS.