Editor’s Note: The full report from the ISS National Lab with all references is here.

Among the general global population today, there is undoubtedly a high degree of awareness of the widespread pollution of Earth’s oceans by anthropogenic debris (caused by humans), also called marine debris. The major component of marine debris is synthetic, petrochemical-derived plastic in various forms. The ever-growing public concern with plastic pollution has intensified efforts aimed at responsible and reduced plastic use and recycling and has further motivated research to seek alternatives to plastic.

This article highlights and expands on the ideas presented by the International Space Station (ISS) U.S. National Laboratory at its second annual sustainability workshop in July 2019. The workshop focused on how remote sensing and the microgravity environment on the ISS can be uniquely leveraged in the efforts to address the global challenge of plastic pollution.

Marine debris originates from both land- and marine-based human activities. Land-sourced plastic debris enters the environment at all stages in the cycle of production, use, and disposal, enters into watersheds in proximity to densely populated coastlines, and is eventually transported into the ocean. Marine-sourced debris includes discarded fishing equipment such as nets, traps, and floats, and debris from cargo ships and oil and gas platforms that may be deliberately or accidentally discharged into the oceans.

Gary Bencheghib
The cleanup for the rivers of the Indonesian island of Bali began when brothers Gary and Sam Bencheghib’s videos of floating down the dirtiest rivers on boats made of plastic bottles tied together brought the problem to the attention of President Joko Widodo, who subsequently promised the clean the rivers of Indonesia (www.makeachange.world). Gary spoke at the World Economic Forum in January 2020. He then went to Panama to travel via bike, boat and on foot from the Pacific Ocean to the Atlantic Ocean on the Earth Vision Journey with other youth leaders to inaugurate the Geoversity School of Biocultural Leadership. 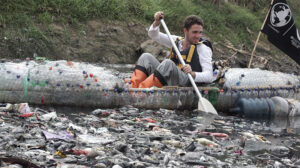 Boyan Slat
Ocean plastic is being cleaned up by several ambitious organizations, including The Ocean Cleanup (The Ocean Cleanup), which was founded in 2013 by Dutch inventor Boyan Slat at the age of 18 in his hometown of Delft, The Netherlands. So far, they have deployed four Interceptors, a boat structure that catches trash in the water. Shown here is Boyan Slat on the Klang River, Malaysia. 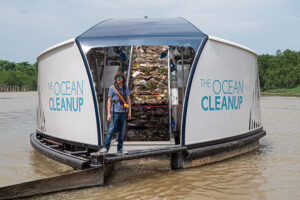 The visible floating debris accumulations are only an indicator of the enormous scale of the pollution. Microscale and nanoscale plastic debris, which results from the breakdown of larger pieces, is now found practically everywhere — in the most remote parts of the ocean, throughout the marine food chain, in the global biosphere, and even in geological formations. Yet, increases are projected in global demand and production of synthetic, non-biodegradable petroleum-based plastics. If a sustainable alternative is not found, plastic and other debris will continue to accumulate in human habitats everywhere.

The ISS National Lab held its second annual sustainability workshop during the 2019 International Space Station Research and Development (ISSR&D) Conference in Atlanta to gain industry perspectives and gauge interest in an ISS-based technology development effort to address plastic pollution. Participants from 13 invited large and small organizations attended, representing the following sectors: sports, aerospace, technology, agricultural sciences, retail, advanced computing, environmental, government research, and technology innovation. The two areas discussed by the ISS National Lab and invited presenters were (i) remote sensing for detection and monitoring of marine debris, and (ii) the use of the microgravity environment on the ISS for research that may accelerate the development of environmentally friendly alternatives to plastic.

Space-based, remote sensing data can be applied to provide parameters for ocean circulation models used to predict the paths of marine debris throughout the oceans. Modeling studies after the Shoe Spill in the North Pacific and after the 2011 Fukushima earthquake and tsunami showed that marine debris movement can be simulated and mapped using satellite imaging. Models like the General NOAA Oceanographic Modeling Environment (GNOME) can be refined with additional, high-quality satellite data. 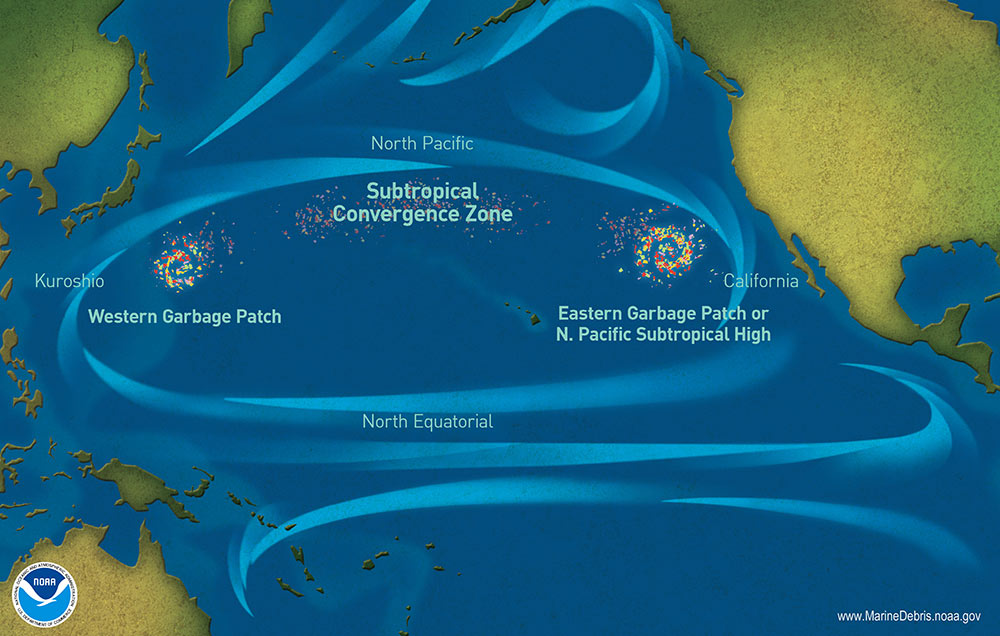 Modeling results can be coupled with the deployment of active or emerging passive technologies for remediation, or in the future, for prevention of debris inflow into waterways and oceans. Prevention work may be performed in concert with governmental, private, and nonprofit organizations for regulation and enforcement. Another important and related potential application of satellite remote sensing data is the study and mitigation of the global spread of invasive species that are able to drift across the oceans on rafts of indestructible plastic debris.

The European Space Agency (ESA) sponsored two parallel ongoing projects, OptiMAL (Optical Methods for Marine Litter Detection) and ReSMaLi (Remote Sensing of Marine Litter), focusing on passive optical spectroradiometric remote sensing to identify the characteristics of orbiting optical sensors optimal for detection of plastic marine debris. At the University of the Aegean, the Marine Remote Sensing Group has been testing the detection of plastic using multispectral satellite imagery from Sentinel-2. Clearly, there are opportunities for global collaboration that may be facilitated by the ISS National Lab (particularly with ESA member countries that are also ISS partners) in order to accelerate remote sensing technology development for practical marine debris mitigation applications.

The ISS has an inclined orbit of 51.6°, which permits remote sensing of about 90% of the populated Earth and significant portions of the Earth’s oceans with a three- to five-day average revisit time. Exterior facilities on the ISS, such as Teledyne Brown Engineering’s (TBE) Multi-User System for Earth Sensing (MUSES) precision pointing platform, are available for testing prototype sensors. MUSES currently hosts the DLR Earth Sensing Imaging Spectrometer (DESIS), a hyperspectral sensor able to precisely scan the land surface, the atmosphere, and the oceans. The “equatorial” orbit of the ISS may permit tropical ocean sections often obscured by clouds to receive some cloud-free collections at high enough revisit times. Table 1 provides a summary of DESIS key specifications, courtesy of TBE.

Just prior to the workshop, TBE tested the capability of DESIS to detect marine debris in the Eastern Pacific Garbage Patch by targeting coordinates around 32°N and 145°W. The high spectral resolution and visible to near-infrared (VNIR) spectral range of DESIS are highly desirable features that improve the chances of successful detection of marine debris. A collect with four scenes was acquired with the above coordinate center points on June 29th, 2019. These scenes contained a number of clouds, covered 3,600 km2 of area, and included more than 4 million pixels (the entire Great Pacific Garbage Patch is estimated to cover an area up to 1.6 million km2.

Using the ENVI software from L3Harris Geospatial Solutions, the data volume was reduced by highlighting only pixels found to be “anomalous.” Once pixels were identified as anomalous, they were inspected to see if they were water, clouds, or marine debris. Pixels that included cloud edges and what appeared to be brownish mats in true color images were routinely flagged as the most anomalous. Cloud edges are pixels that mix clouds and water, and while there are fewer of these pixels than of clouds or pure water, the cloud fringes were easily identified by visual inspection.

Other anomalies had a uniquely different spectral signature than the other scene contents and often appeared as clumps of brownish pixels in the water. Using these pixels, other areas were found throughout the 3,600 km2 swath that show high likelihood of containing the debris content signature.

Figures 2 and 3 show the data obtained from DESIS, including a mosaic of imagery of the area for a larger view. Figure 4 shows the quantified analysis of reflectance spectra demonstrating where the garbage is located. 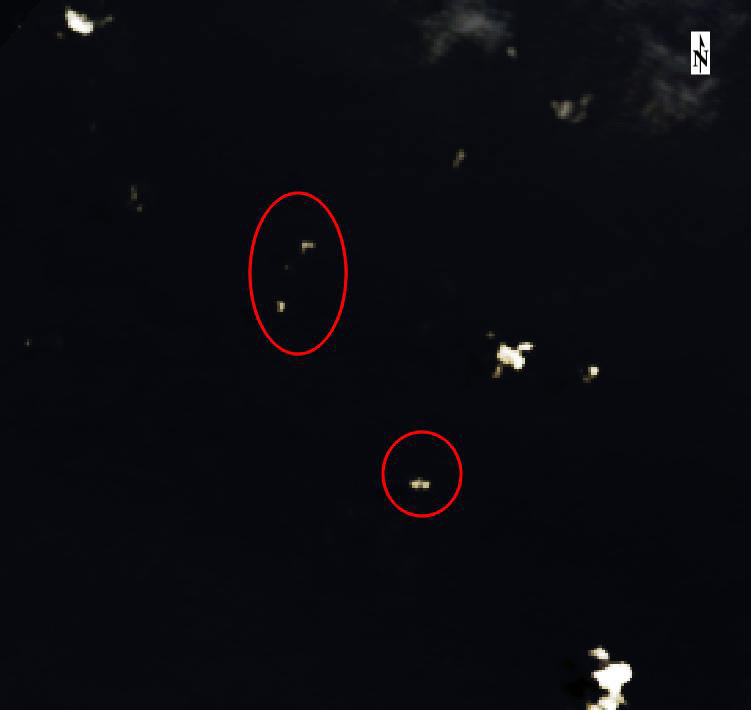 Workshop participants concurred that this analysis of DESIS hyperspectral data seemed to be a step forward in detecting marine debris, and all expressed support for additional work to further develop remote sensing capability for ocean plastics using the ISS. Accordingly, with assistance from the workshop participants and other interested organizations, the ISS National Lab plans to support the following actions:

The ISS National Lab will propose the formation of an advisory group to guide the development of programmatic research on the space station focused on the mitigation of plastic pollution. One area of emphasis will be on efforts to utilize data from existing or new future ISS sensors to develop the capability for detection, monitoring, and cleanup of plastic in the ocean. In the long term, new business opportunities in geospatial analysis may emerge based on unique data products from advanced plastic-debris sensing satellites.