More than half a century after a study by The Aerospace Corporation first laid out the design options for it, the Global Positioning System (GPS) is now used for a vast array of missions, from personal navigation to tracking fleets of vehicles, from landing aircraft to timing the Internet, from location-based services to missile guidance, from surveying to scientific research. This has made GPS – as the essential source of positioning, navigation, and timing (PNT) data – a “critical infrastructure”  for the country. For this reason, the U.S. Air Force, through its Space and Missile Systems Centerís GPS directorate, has been working for many years to modernize, toughen, and augment the system and to increase its resilience against such threats as jamming, spoofing, and space weather events. 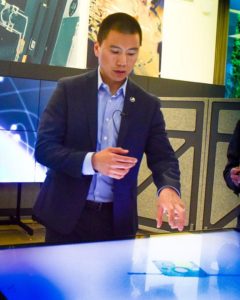 FIGURE 1
Randy Villahermosa, Executive Director of Innovation at The Aerospace Corp. discusses how Sextant creates an alternative for precision positioning, navigation, and timing (PNT) that will enhance the resiliency of PNT while leveraging the global GPS signal.More than half a century1

Additionally, the Department of Defense is now promoting the development of an alternative PNT system to act as a backup to GPS. As part of this effort, two years ago Aerospace launched Project Sextant, to study current and future options to improve the resilience, flexibility, and availability of PNT where and when GPS is not available. A federally funded research and development center chartered in 1960, during the space race, Aerospace Corporation is “unbiased and free from conflict of interest,” says Dr. Randy Villahermosa, the Executive Director of the companyís Innovation Lab. Its primary mission is to assure the success of U.S. satellite systems and missions.

Project Sextant is studying how to protect PNT services from both natural phenomena and man-made threats, how to increase flexibility and reduce costs, and how to expedite the introduction of new technologies. The study’s scope includes inertial sensors, optical sensors, and “beacons of opportunity,” such as WiFi routers and cell phone towers. All of this work overlaps in large part with the parallel effort by car manufacturers, car service companies, and geospatial hardware and software vendors to develop self-driving cars (Editor’s Note: See “Lidar is Key to Autonomous Vehicles” in the Winter 2017 issue of Apogeo Spatial (https://apogeospatial.com/lidar-is-key-to-autonomous-vehicles). It aims to transition from GPS, which is a vertically integrated system, to a horizontally integrated system in which GPS is augmented by a variety of PNT sources.

According to Villahermosa, one initial conclusion of the study is that there is currently no replacement for GPS. Another one is that end users should have more flexibility in how they integrate different sources of PNT using a single device.

FROM GPS TO ILAB

A recently declassified study that Aerospace conducted for the Air Force in 1964 was a milestone in the genesis of GPS. It was in response to a request by the Air Force to review existing technologies and help it devise a way to use satellites to provide navigation. “We looked at the available computing power at the time, especially in receivers,” says Villahermosa. “We looked at two-dimensional and three-dimensional navigation. We asked very fundamental questions about what the satellites should do and how the system should be architected. The result was analysis of twelve options and recommendation of one option. The Air Force accepted the Aerospace recommendation, and that is still, today, the way that GPS is architected.”

Aerospace has worked hand-in-hand with the Air Force on GPS ever since, providing technical advice on architecting, developing, acquiring, and building satellites, setting up ground control stations, designing some of the military receivers, all the way to launch, operation, and system performance monitoring. “We are integral in many ways to the governmentís space enterprise,” says Villahermosa. “We support a variety of customers across the space-faring government agencies. The Air Force is one of our primary focus areas.”

About six months ago, Aerospace launched its iLab initiative. “It was borne out of a desire to ask some basic questions,” says Villahermosa. “What is the next big idea? What role can Aerospace play in conceiving it and bringing it to reality? GPS was very much in that theme, being a transformative, innovative idea. We innovate on a daily basis. We have a tremendous talent pool of engineers and scientists and we want to leverage it as one team in search of new ideas and bringing them to the forefront.” Project Sextant was one of  iLab’s very first projects.

GPS receivers require a clear view of the sky. Therefore, they work poorly or not at all in urban and natural canyons, indoors, under dense foliage canopy, underwater, and so on. Additionally, GPS signals can be degraded by intentional or unintentional sources of interference. “We understand that there is a lot of activity happening right now in ways to augment GPS, both indoor and outdoor,” says Villahermosa. “We wanted to figure out whether there was a different way to think about the problem. That’s where the context for Sextant was born.”

Sextant envisions a device that is able to pull in many different sources of PNT, including satellites, WiFi or cellular signals, and vision sensors that can recognize landmarks. “Maybe thereís a peer-to-peer way to do PNT, in which different users are coordinating with each other and give each other information about their whereabouts,” Villahermosa speculates. The project is also looking at the role of inertial sensors and at miniaturizing atomic clocks.

“A couple of decades ago, the federal government may have driven innovation and been the major source of that activity, but certainly now we are seeing many examples where the commercial sector is a significant source of the innovation,” says Villahermosa. “Look at cloud computing, for example.”

Once it settled on the all-source approach to PNT and recognized the commercial sector’s tremendous role in innovation, Villahermosa recalls, the iLab team wanted to connect the innovation happening in the commercial sector with the needs of government users. “We came up with the idea that we should think about this as an open source problem,” he says. “How do we create an open source platform for user equipment that allows them to get multiple sources of PNT while maintaining an open source approach to its development?”

The Sextant approach does not require users to install additional hardware. “Our vision for the first generation is a dongle-like device that you can plug into your cell phone,” says Villahermosa. “It has a software-defined radio and a GPS receiver and is able to do opportunistic navigation. It could use the cell phoneís camera or, if you are talking about autonomous vehicles, the cameras that are mounted in the vehicles to do that. And then, obviously, thereís the inertial piece. The idea is that it is self-contained and easy to upgrade.”

iLab designed the Sextant concept around three key concepts. The first one was sensor fusion. “This is where there is a lot of overlap with autonomous vehicles and the Internet of Things,” Villahermosa points out. “We are leveraging technologies that would ordinarily be thought of in those realms and bringing them into the more pure PNT world.”

The second one was open source, as the way to spur innovation and technological advances. “Here you have a community of developers who are creating the interfaces, the software, and the application.”

The third one was integrity. “That’s really where we are leveraging a lot of our unique capabilities and expertise. We are developing algorithms and experimenting with approaches that evaluate all the signals and try to decide which ones should be weighed more heavily and to see how well you can maintain your position relative to truth using these integrity algorithms.”

Of course, there is a huge difference between being in the center of a dense urban area, with a multiplicity of signals of opportunity and visual cues, and being in the middle of a desert or an ocean. For this reason, Sextant also aims at developing the capability to show users what the expected performance of PNT would be at any location on the planet, given the sources available. “A vision for this capability is that we can simply enter in a lat/long and estimate the available RF signals. This could also lead to the development of new technologies to augment GPS, such as beacons. The ability to intelligently do the make/buy decisions is key.” 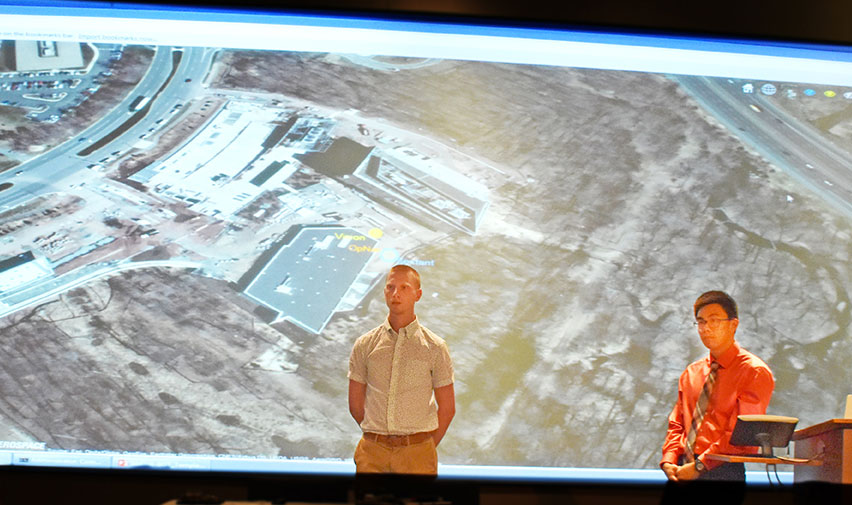 FIGURE 2
Aerospace digital communications engineers, Sebastian Olsen and Alon Krauthammer (from left to right) work on the rapid development of the Sextant prototype and incorporate the latest technology in machine learning.

iLab does not currently have any government clients for its Sextant project. “We create new ideas and incubate them and look to form strategic partnerships,” says Villahermosa. “Right now we talk fairly regularly with other elements of the government or the commercial sector who are involved in this way of thinking about augmenting GPS and we are constantly keeping each other apprized on what we are doing and sharing our thoughts on that.” This is a traditional technological leadership role for Aerospace, which is prevented by law from competing with the commercial sector in manufacturing. “This is how we are able to remain free of conflicts of interest.”

AN OPEN SOURCE COMMUNITY FOR PNT

Villahermosa wants to create an open source community around this project. “I see a lot of folks interested in PNT and the community is quite vibrant. The challenge we are taking on is how to get people who donít think about PNT and get them excited about what is possible when you know your location that well and what location services can do for their businesses and how that can be enabled. Recently, Google released an article on how they keep time between their data centers and a lot of that technology you will recognize from the PNT world. I doubt that most of the people in IT would make that connection.” 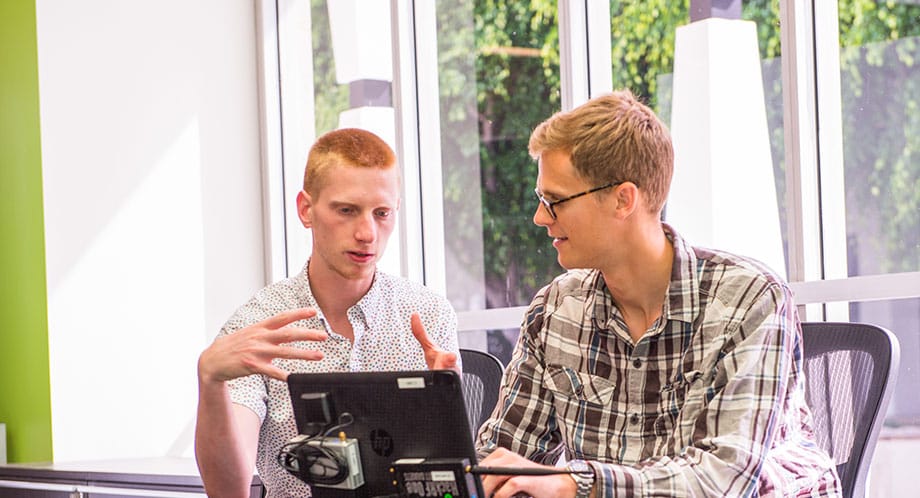 A key challenge when trying to integrate multiple sources of PNT is that they have different accuracies and spatial references. The disciplines of geodesy and surveying will be essential to the creation of a consistent reference framework. “These signals are inherently different: they operate on different time scales, they have different types of error,” Villahermosa points out. “It is really about managing the errors in these sources and they all behave differently. So, the challenge and the smarts of Sextant will really be to make those choices between different sources in order to be able to give an accurate estimate of position and knowledge of that.”

The success of Sextant and similar projects will enhance the spectacular success of GPS, now available to billions of people, by eliminating or ameliorating its current weaknesses. It will enable seamless navigation in and out of buildings, tunnels, canyons, and dense forests and the advent of a new generation of automation, such as driverless cars.