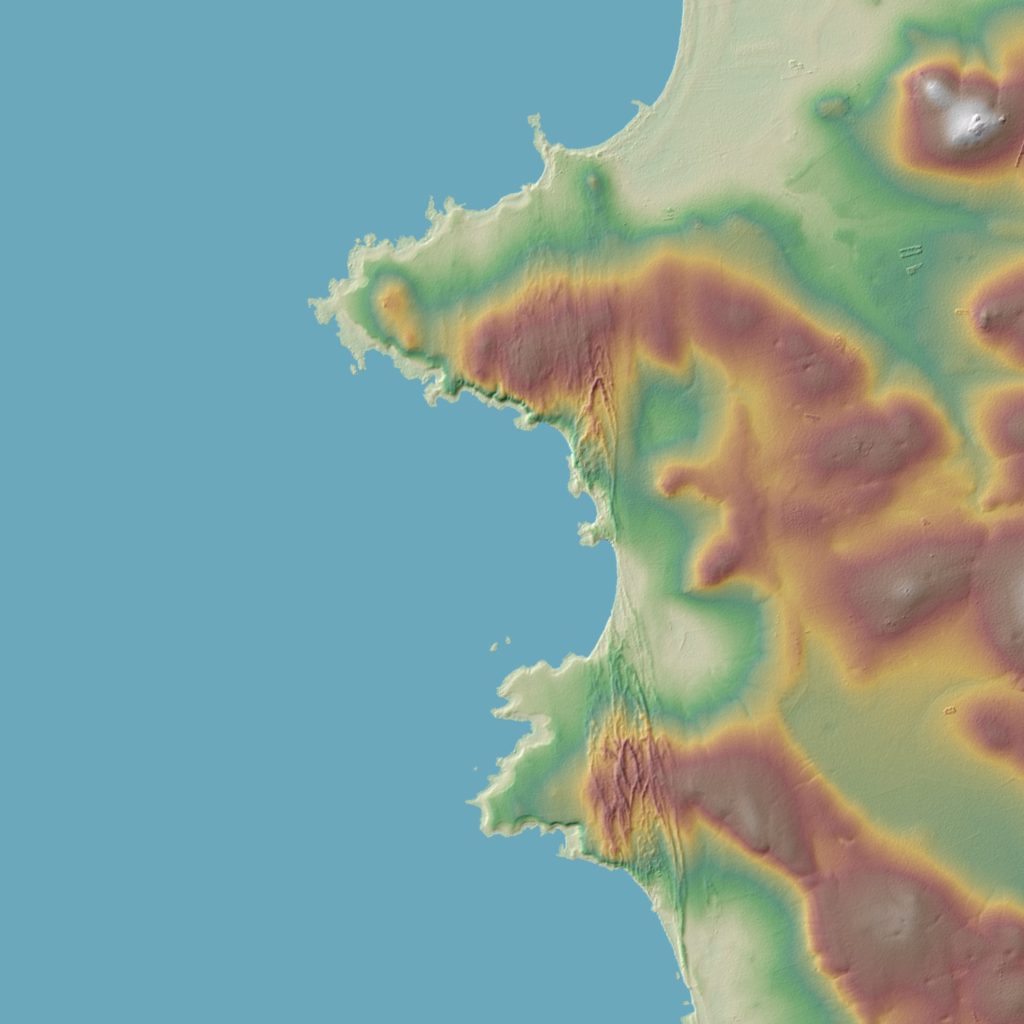 Cartography of the world’s ocean shorelines goes back to the voyages of the first great explorers, when mapping was done by sight. Cartographers created maps based on what could be seen by boat and from the coast itself. The detail and accuracy of these maps were completely dependent upon the physical and intellectual capabilities of the cartographer. Over time, improved surveying techniques led to the generation of more detailed, precise maps, and with the arrival of aviation, cartography moved its observation post and took on new heights.

Thanks to aerial photography from planes, airships and balloons, it became possible to access views of wider areas more rapidly. A new era of mapping had begun. A further giant step was achieved when the first Earth observation satellite, Landsat, was launched in 1972. Images acquired by Earth observation satellites enabled cartographers to reach new horizons with the ability to view hundreds of kilometers of shoreline in a single picture taken from space.

Shorelines are influenced by the geology and topography of the surrounding landscape as well as water-induced erosion caused by waves, currents and tides. Therefore, in addition to a full view of the area, an up-to-date and detailed Digital Elevation Model (DEM) is required to precisely map them. For nearly 40 years, Earth observation satellites have played an important role in developing a synoptic understanding of surface conditions, including the geology, terrain and surrounding environment. Among the extensive global DEMs derived from Earth observation satellites currently available, Airbus Defence and Space’s WorldDEM provides highly detailed shoreline mapping with a unique and homogeneous information source.

One of the offshoots of producing the WorldDEM is the delineation of the extents of water bodies (including oceans) at a consistent scale, worldwide. Airbus Defence and Space is harnessing this information to produce the Global Ocean Shoreline product, which brings a new dimension of accuracy and currency to the marketplace. Global Ocean Shoreline is intended to replace existing global or sub-global shoreline datasets, such as the Global Self-consistent Hierarchical, High-resolution Shoreline database (GSHHS) and the SRTM Water Body Mask (SWBM). Both vector datasets are at a lower resolution, and not as up-to-date as Global Ocean Shoreline. GSHHS was derived from several sources, over different time periods, leading, in many places, to an inaccuracy of several hundred meters, whereas SRTM data is now over 16 years old and does not extend North or South of 60° latitude.

WorldDEM is the first elevation model to provide truly pole-to-pole coverage, and it offers unique accuracy and quality, surpassing that of any global satellite-based elevation model available today. Its relative vertical accuracy of 2m and better than 4m absolute accuracy (in a 12m x 12m raster) defines a new standard in global elevation modeling, making WorldDEM a reliable and precise reference layer to enhance a wide range of applications. 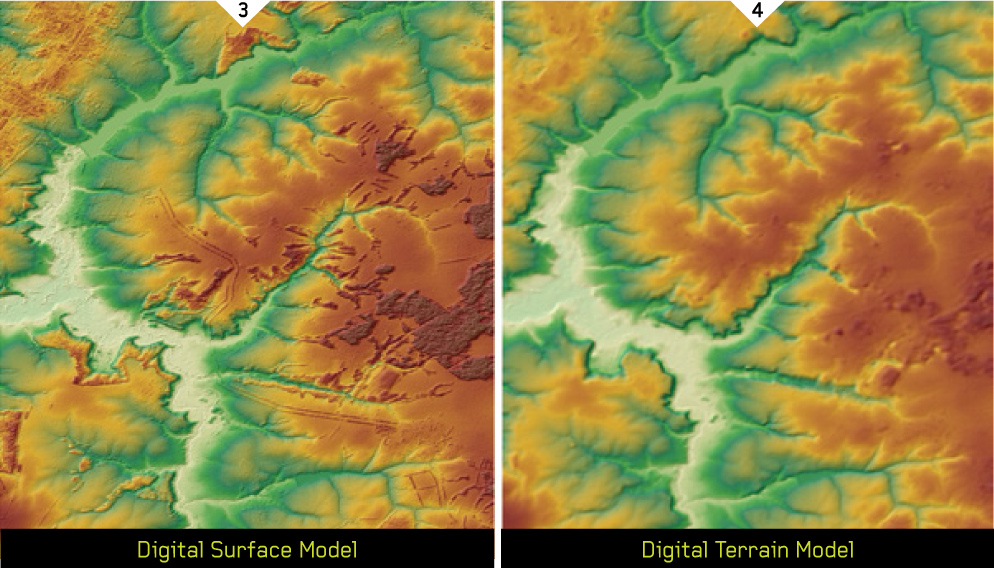 The input data for the WorldDEM was acquired by the German radar satellites TerraSAR-X and TanDEM-X during the TanDEM-X DEM mission, implemented in the frame of a Public-Private Partnership between the German Aerospace Center (DLR) and Airbus Defence and Space. Both satellites started the synchronous data acquisition in 2011 by forming the world’s first free-flying, high-precision radar interferometer in space. They completed two coverages of the Earth’s entire landmass, and covered more complex areas with a
third and fourth acquisition campaign to ensure consistent high quality and accuracy of the final product, in less than four years. The two satellites flew in a very close formation with distances of as little as 150m between them, a technical feat that had never been tried before and worked with perfect reliability for more than three years.

Airbus Defence and Space is responsible for the adaptation of the elevation model to the needs of commercial users worldwide and refines the DEM according to customer requirements, e.g. editing of water surfaces or processing to a Digital Terrain Model (representing the bare Earth’s terrain). Three main WorldDEM products are available: an unedited Digital Surface Model (DSM), an edited DSM, and a Digital Terrain Model (DTM). The edited Digital Surface Model consists of a hydro-enforced DSM with water body features derived from radar imagery. It serves as the basis to produce the Global Ocean Shoreline.

THE INCEPTION OF
GLOBAL OCEAN SHORELINE

Since the geographically-limited SRTM Water Body Mask was developed over 16 years ago, there has been no new commercially available shoreline product that covers the Earth from pole-to-pole and 360° degrees around. To fill this gap and generate a new global vector product accurately delineating the world’s ocean shorelines, Airbus Defence and Space has entered into a cooperation agreement with the Center for Southeastern Tropical Advanced Remote Sensing (CSTARS) at the University of Miami in the U.S., to create the Global Ocean Shoreline product.

CSTARS has a long history of combining excellence in oceanography and the latest in remote sensing technologies. One of the major goals of CSTARS is the monitoring of the oceans and changing ocean shorelines worldwide, be they natural or manmade. The ability to monitor these changes on a global scale requires CSTARS to have access to the most up-to-date geo-information from multiple optical and radar sensors. Through its network of satellite ground stations, CSTARS is able to access accurate and timely satellite imagery as needed, to service a variety of research and practical uses.

The production of the edited WorldDEM consists of flattening the water surfaces of lakes and reservoirs to a single elevation, setting rivers and canals to a monotonic flow, and setting oceans to zero meters. The shorelines of all water bodies are detected using the radar (amplitude) images of the WorldDEM product. Because radar waves are reflected away from the radar sensor by smooth and flat surfaces such as water, water has a consistently black appearance in these images. This allows for the semi-automatic detection of shorelines during the WorldDEM water editing process. Once waterbodies are detected, they are further classified into lakes, rivers and oceans. This classification and the extent of the water bodies are combined to create the WorldDEM Water Body Mask.

The WorldDEM WBM is a raster file with the three types of water bodies identified, in addition to land (or not water) making it a valuable record of the extent of lake, river and ocean shorelines on a global scale. However, it is understood that many users of geodata would find it more convenient to have a simple vector file of ocean shorelines, rather than a large series of raster files; hence the Global Ocean Shoreline was born.

The Global Ocean Shoreline is derived from the WorldDEM following several intermediate steps. First, all water surfaces are delineated to generate a Water Body Mask which is used to detect the ocean shorelines. The WBM is a raster file that needs to be objectively converted into a consistent vector, free from gaps and crossing segments suitable for coastal applications. CSTARS’ expertise in ocean shoreline environments is used for additional vector correction to account for any recent temporal changes (new ports, marinas, jetties, breakwaters, beach erosion or accretion, etc.) by comparing the shoreline to the latest available satellite imagery. The resulting Global Ocean Shoreline is a homogeneous, gap-free and up-to-date database.

OPENING A NEW RANGE OF APPLICATIONS

Global Ocean Shoreline, thanks to its high-resolution at a global scale, can support a wide range of applications. It offers the accuracy required for tsunami or hurricane storm surge inundation modeling, and sea-level rise studies as well as coastal and littoral spatial planning, hazard mitigation and community preparedness. Indeed, anyone who uses GIS applications will welcome a more accurate land/ocean boundary for clipping datasets to the ocean’s edge.

The Global Ocean Shoreline will be globally available at the end of 2017, with progressive availability of full continents throughout 2017. While the focus of this particular new WorldDEM product is ocean shorelines, the production process is equally adaptable to lakes and rivers worldwide, as these can be produced in vector format, on request.