Large users of geospatial data are searching for alternatives to Google Earth Enterprise (GEE), which Google will discontinue in the spring of 2017. Several geospatial companies offer partial replacements, though their offerings differ somewhat from each other and from GEE.

The first installment in this series in the Fall 2015 issue, “The Demise of Google Earth Enterprise: ArcGIS Earth & Vricon Fill the Gap,” covered two of the possible alterna- tives to GEE. This installment covers three more companies that can provide at least a partial replacement to GEE: Galdos Systems Inc., which makes INdicio; Skyline Software Systems, which makes SkylineGlobe and TerraExplorer; and Onix Networking Corp., which integrates Skyline software into organizations’ IT systems.

This is the 2nd in a series of articles offering companies options and definitions for data management and visualization. The 1st feature in the Fall 2015 issue included VRICON’s Globe in 3D, and Esri’s ArcGIS Earth (http://bit.ly/1XPOhka). Also, see article on new OGC standards for “Digital Earth,” the Discrete Global Grid System, here.

GEE is an on-premise, 3D application that many organizations use behind their firewall to control who has access to their data. It stores and displays huge amounts of imagery, as well as terrain data. One use of the terrain data is to search for line-of-sight paths between locations. For example, companies setting up microwave stations want to make sure that there are no mountains, hills, or buildings between their proposed locations.

The demise of GEE leaves a big space to fill. “It is an extremely powerful product and it has done a great deal of good for the geospatial community by commoditizing GIS data for actual consumers,” says Matt Harrison, vice president of the Defense Business Unit at Skyline Software Systems. Google’s discontinuation of the platform, however, is not surprising. “They are focused primarily on the
consumer market and on advertising and revenue generation, and the sheer number of GEE users just didn’t move the needle for a company that large,” says Harrison.

Since Google announced its deprecation of GEE on March 20, 2015, many people who previously only knew the Google brand have been investigating alternatives. “So, we’ve been educating people on alternative solutions and differences in capability,” Harrison says.

INdicio is a data management system. Any data object stored in it can have many properties, including spatial properties, and it can manage, spatially index, and spatially search for images. “INdicio provides far stronger data management capability than Google Earth does,” says Ron Lake, CEO of Galdos Systems Inc., which developed INdicio. For example, he points out, it enables users to describe the semantics of their data. 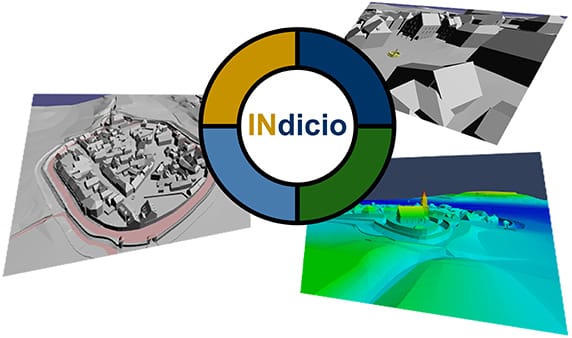 For example, a city’s GIS may contain such features as roads, fire hydrants, and policing districts, and somebody may want to be alerted whenever a fire hydrant is changed or added, without having to periodically query the database and look for changes. They can do that by subscribing to that data. Some people may want to circumscribe their subscription even further. For example, they may only want to be alerted, in real time, when fire hydrants in a certain neighborhood are modified or added. “People think of that as normal for, say, banking information but maybe less so for information that has geographic properties,” Lake points out.

INdicio enables users to automatically synchronize any of their data, including geographic data, with other databases. It has a subscription and publication capability that enables it to automatically subscribe to data as it is changed in any of its various sources and can act as a publisher to automatically distribute data to subscribers across a wide area network. “We believe that data synchronization in these senses should be a capability of an enterprise information system,” says Lake. 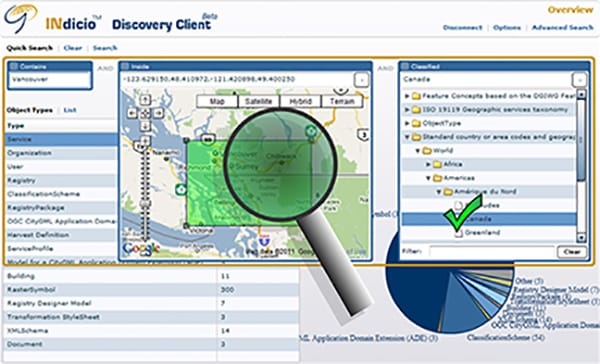 FIGURE 2. INdicio can index and manage any type of data and can support complex searches that include spatial and geometric properties.

FIGURE 3. INdicio can synchronize data from multiple disparate sources across a wide network of databases and systems.

INdicio can visualize geographic information by overlaying it on a Web map service, but that is not its strongest suit because, unlike GEE, it is not an Earth model with an image base. However, there are other visual globes—such as Cesium and World Wind—that can be used in conjunction with INdicio. “On the other hand, if you are trying to manage a large amount of data that has location and extent and some other properties, and this information is critical to your enterprise, then INdicio can do that,” Lake says.

Like GEE, INdicio is capable of managing and serving very large volumes of imagery and digital elevation models. One INdicio user has a database of 40 million objects, such as hotels and points of interest, and requires the ability to update it at about 50 inserts per second per core, says Lake. “We are certainly able to do that. The ability to insert/ update data and then query it based on a wide variety of criteria—some of which are spatial, some of which are taxonomic, and some of which are based on relationships with other objects—is a strong suit of INdicio and much stronger than in the case of Google Earth,” he says.

Skyline Software Systems, which does the vast majority of its U.S. business in the military and intelligence community, can provide an alternative to GEE as an enterprise system. “Our target customers are those people who want to build up, present, and disseminate their own information out to a community of users—be they military operators or state and local governments trying to get results out to the populace,” says Harrison. “We sell them the architecture to stand up their own data, customize the front end, and then disseminate that data out to users.”

One big differentiator between Skyline and GEE is the former’s ability to read data natively. Using GEE requires organizations to re-process all of their data into Google’s terrain database through Google’s engines or through a third-party architecture. Furthermore, any vector or image overlay has to be in KLM or KMZ format. Skyline, Harrison explains, reads any kind of raster imagery or vector data in its native format, from its native location, with virtually no re-processing. “We are able to dynamically render it in 3D, in real time, so you don’t have to spend days, weeks, or months re-processing your data to get it into our format,” he says. 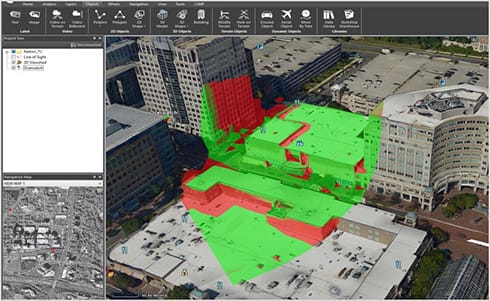 Another differentiator is the ability to disseminate out capabilities to end users. “Google Earth is a fantastic viewer, but that is pretty much the extent of it,” says Harrison. “Very little analysis actually occurs at that end. Our end user, using just a free viewer, can do terrain analysis, line of sight, slope mapping, contour mapping, view sheds, and much more.” 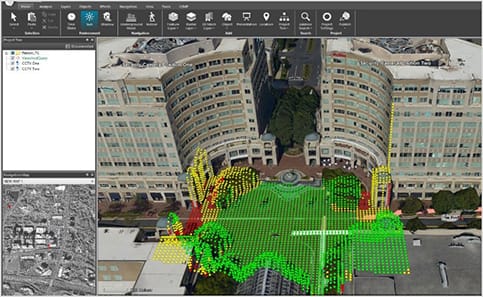 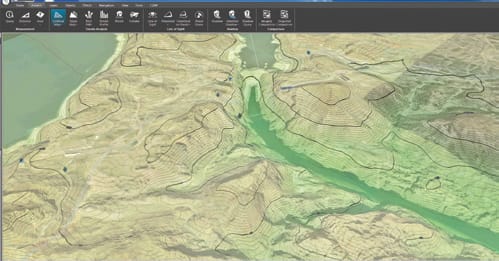 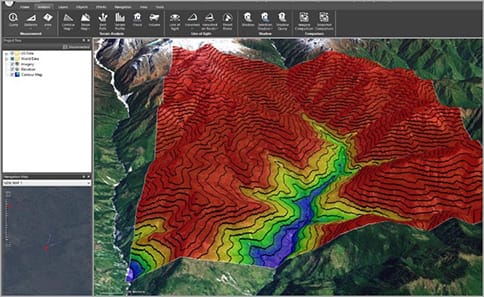 FIGURE 7. Intensity and direction of terrain slope displayed in TerraExplorer.

Onix Networking Corp., an IT infrastructure company, is one of the largest integrators of Google software. It is a sales organization but also has an engineering and 7 support back end, explains Dal VanDervort, the company’s vice president for public sector sales. Onix can help organizations that have been using GEE for years to migrate their data to Skyline, intergrate Skyline into their networks and infrastructures, conduct trainings, and provide technical support.

A downside of the imagery available via GEE is that it is proprietary and has to go through Google’s fusion server, points out VanDervort. “So, one of the things that we bring to large organizations is a variety of different types of imagery that they can load through the fusion server, which is very popular.”

When Onix began looking for a replacement for GEE, they were looking for a 3D platform that offered terrain data and would allow measurements to be taken on screen while looking at imagery. “Nobody out there had a promising 3D imaging application, not even Esri,” says VanDervort. Then Onix found Skyline, which has a true 3D application, as well as terrain data capabilities, and measurement capabilities.

A big piece of Onix’customer base is in the federal government, in particular in defense and intelligence. “A lot of the data that they 6 are using, obviously, has to be locked down,” says VanDervort. “So, there are specific items that have to be met in order to keep customers happy as far as moving off of GEE.” Because security is a big concern for many of them, their customers need an application that they can host on-premises or build within their network, behind their firewall. It must also have a 3D capability, a measurement capability, and options available as far as the types of imagery that it can use, whether it be lidar, GeoTIFFs, or other formats. Skyline offers all of those capabilities. 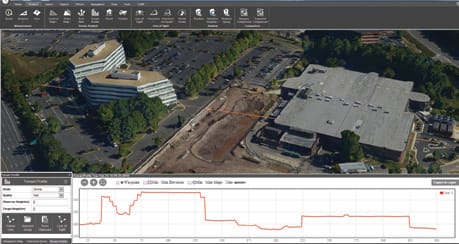 Another key capability is APIs for development. “Every application out there needs an API or a development piece for their solutions,” say VanDervort. Yet another very important consideration is the number of concurrent users that a platform can handle from a wide variety of mobile devices. “Most of our customers are global and want to be able to use their data from wherever they are, using a tablet or a phone or something else,” says VanDervort. Skyline, he says, meets all of those criteria as well.

A good example of an organization looking at a product like Skyline, says VanDervort, would be an oil and gas company looking at placing new pipe- lines. It needs to know what the terrains look like. “If they are trying to maintain existing lines, they could use up-to-the-minute fly-by data or imagery and push that through Skyline 3D to map existing piping systems, electrical lines, or phone lines,” he explains. “There’s a lot of data that you can put in there to show rights of way or county lines, possibly vegetation and growth restrictions, where you have to go in and make some changes.” 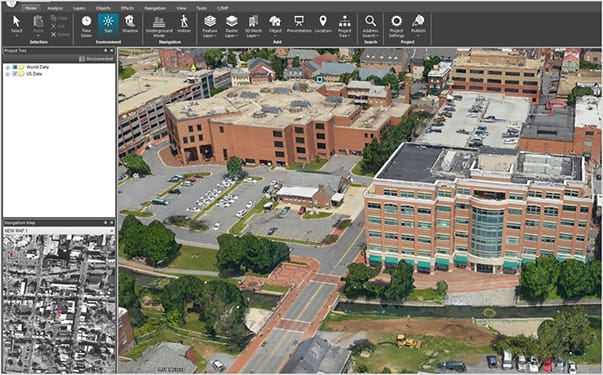 Another good example is airports. “Many airports use a 3D imaging solution for runway maintenance, so that they can see whether there are any trees that are overgrowing any areas or if there is anything in the pathway that shouldn’t be.”

Is spatial data special? It’s an old debate. “It is in the sense that you typically need special data presentation mechanisms and tools, but otherwise it is not,” says Lake. Therefore, unless all of your data consists only of geographic features—for example, if you are a mapping agency—the notion of enterprise GIS is “a wrong notion,” he argues. Most organizations would like a single source of truth for all of their enterprise data, but not all of it has location or spatial extent associated with it.
What will large organizations, such as the National Geospatial-Intelligence Agency (NGA), do to replace their reliance on GEE? “I would hope that they would separate data management from visualization, because to me they are different,” says Lake. Separating data management and presentation would make it easier in the future to use different kinds of visual presentation, he argues.