Bringing the Overview Effect Down to Earth 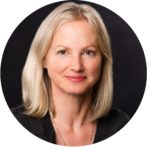 By Claudia Welss, Chairman of the Board,
Institute of Noetic Sciences,
Berkeley, Calif., www.noetic.org

Claudia is also an Executive Producer of the Edgar Mitchell Overview Effect Virtual Reality Experience, a sophisticated simulation being produced by IONS in late 2019.

“If somebody had said before the flight, ‘Are you going to get carried away looking at the earth from the moon?’ I would have said, ‘No, no way.’ But yet when I first looked back at the earth, standing on the moon, I cried.” -Alan Shepard, Astronaut on Apollo 14 in February 1971

In the upcoming drama/sci-fi feature film Lucy In the Sky, Natalie Portman plays an astronaut (loosely based on real-life astronaut Lisa Nowak) struggling to readjust to life on Earth after experiencing the vastness of space. Who wouldnít be changed by the experience? Itís well known that seeing Earth from space has a profound effect on the human psyche; some astronauts even report coming home needing to readjust to life in new, ìdeeply religious” states. For many, the effect is truly life-altering.

To date, almost 500, or two-thirds of all astronauts, have reported experiencing what author Frank White termed “The Overview Effect” (OE). The OE is a phenomenon signifying the predictable outcome of astronauts developing a radically new philosophical point of view in order to accommodate a radically new physical perspective – like seeing Earth as a unified but fragile presence with a paper-thin atmosphere protecting her inhabitants from the harshness of space. Concepts like Buckminster Fuller’s “Spaceship Earth” — where humans are not passengers, but crew — become visceral realities instead of abstract ideas. But it’s the cocktail of overwhelming emotion created by feelings of wonder, reverence, humility and oneness that appears responsible for astronauts being prompted into sudden, unexpected moments of self-transcendence (the expansion of one’s sense of identity and purpose) through the transformational power of awe.

Such was the case with Dr. Edgar D. Mitchell, Apollo 14 lunar module pilot and 8th man to walk on the moon. Gazing at Earth from space, Dr. Mitchell had what he described as “an explosion of awareness and a profound sense of interconnectedness accompanied by ecstasy… an epiphany.” This sense of oneness with all of life expanded his view not just of our planet, but of himself, humanity, and humanity’s potential for determining its future. He saw that it was critical to our collective survival that we change the stories we tell ourselves about the limits of our capabilities as human beings. In fact, he believed his direct experience of unity foreshadowed a new wave of evolution in human consciousness, and this belief changed the course of his life.

Dr. Mitchell noted, “You develop an instant global consciousness, a people orientation, an intense dissatisfaction with the state of the world, and a compulsion to do something about it. From out there on the moon, international politics look so petty.”

So on his return, Dr. Mitchell set out to understand his experience by applying the same scientific rigor that was being used by NASA to study outer space to the study of “inner space,” or human consciousness. In 1973, he founded the Institute of Noetic Sciences (IONS) whose mission in the 21st century is to illuminate the interconnected nature of reality through scientific exploration and personal discovery, empowering a more compassionate, thriving world.

Today, this mission translates into two major initiatives. IONSx is a five-year multidisciplinary program to understand the relationship between mind and matter in an effort to advance the current scientific paradigm beyond its dominant materialistic stance. The IONS Discovery Lab (IDL), hosted online and at Earthrise (our 200-acre Northern California campus named after that famous first image of Earth from space), will be the largest study ever done on unlocking the mechanisms of wellness, personal transformation and extended human capacities that transcend our current understanding of space and time. Perhaps someday we may even be able to measure markers of transformation in astronauts as they encounter the Overview Effect in space.

“The feeling of unity is not simply an observation. With it comes a strong sense of compassion and concern for the state of our planet and the effect humans are having on it. It isn’t important which sea or lake you observe. You are standing guard over the whole of our Earth.” -Yuri Gagarin, Soviet Cosmonaut and first human in space in 1961

Fifty years ago, in 1968, Apollo 8 astronaut Bill Anders took what wilderness photographer Galen Rowell called, “the most influential environmental photograph ever taken” — and what poet Drew Dellinger called “our first cosmic selfie” – the image known as Earthrise. It has been published countless times over the years, and is still considered one of the most iconic images of the planet.

As we absorb these beautiful “live” astronaut photos from the ISS, courtesy of Apogeo Spatial and NASA, it’s worth considering what it could mean for more and more people to be forever changed by the OE, especially with the rise of space tourism and the emerging space economy. Virtual reality pioneer David Beaver has said that a mass experience of the OE caused by space travel will “eventually be seen as a major driver of one of the greatest shifts in world awareness in the modern world, equivalent to or greater than the Copernican Revolution or the discovery of the New World. Whether by direct experience, sophisticated simulation or artistic representation, the experience is forever altering the life we think we are living and world we think we are in.”

Through the collective shock and awe of this new, expanded self-awareness, we may end up learning more about ourselves than about space — which may end up being the most powerful reason for going.

“Once a photograph of the Earth, taken from outside, is available… a new idea as powerful as any in history will be let loose.” -Astronomer Fred Hoyle, 1948

Chairman of the Board, Institute of Noetic Sciences, Berkeley, Calif., www.noetic.org Claudia is also an Executive Producer of the Edgar Mitchell Overview Effect Virtual Reality Experience, a sophisticated simulation being produced by IONS in late 2019.