Finally, in August this year it was published: “The Collapse of Western Civilization – A View from the Future”.1 Taking the view of a historian in the Second Peoples Republic of China, who in 2393 looks back and analyzes why 300 years earlier the western culture collapsed, Naomi Oreskes and Erik M. Conway (yes, the same authors who worked together on Merchants of Doubt)2 paint a beautifully scary picture of what might happen in the 21th Century.

The scary part is not so much the story itself, but rather that every detail leading to the total collapse of the North-Atlantic culture and several satellite cultures is scientifically sound and could take place in the way the authors describe it. The scary part is that the collapse is the best-documented disintegration of a civilization; one where all the knowledge was there—but it did not result in decisions that could save the civilization.

Everyone should read the book; it’s thin, affordable, scary, fun and essential. It describes a scenario that could turn out to be very similar to what may happen in this century with the most evolved and complex human civilization ever on Earth. But let’s hope that things turn out rather differently.

I agree with Arthur Simms that there area number of reasons to be an apocaloptimist.3 Anybody who can interpret the data and understand the science doesn’t need a NASA-funded study under the lead of Safa Motesharrei4 to inform us that we are heading for a “perfect storm” with the potential to lead to a civilization collapse. To me, it is very clear that we are heading towards a sustainability and climate apocalypse. But I am optimistic and think we still can turn this around.

There are signs that slowly the evidence for a looming catastrophe is convincing.

Reuters just published two parts of a study emphasizing the risk associated with doing nothing,5 and another study showed that fixing climate change would not add any costs.6 It seems like we are slowly realizing that being inefficient and wasteful and degrading our life support systems on our home planet may be inhumane and not be very smart.

Yes, there are also some who do not understand the science, and a few who for personal advantages tell lies about the science (as documented in Merchants of Doubt). A recent example is the “Wall Street Journal Parade of Climate Lies”,7 where non-experts construct sophisticated logical fallacies to please the journal’s owner, Rupert Murdoch, a well-known “bully in the schoolyard,” who has been prosecuted in other countries for crimes.

The authors of these lies know as little about the complex Earth system processes and the resulting climate as they know about building an airplane. I would never want to fly in a plane built based on their schemes, and I do not want to see humanity’s future being built on their unqualified assessment of climate science. They do not deserve our attention.

What deserves and should have our full attention is the fact that the year 2015 might be the turning point. It is a very special year for our global community. Why is this so? Because we humans are rethinking many global goals, objectives and approaches.

We are in the middle of a number of seemingly independent processes that will set the  global framework for the next ten years. There will be key gatherings at the ministerial level that will determine the focus of the international community in several areas, including but not limited to development goals, disaster risk reduction, and Earth observations.

In 2000, the international community agreed on the Millennium Development Goals (MDGs)8 to be reached by 2015. While we have made progress on some of these MDGs, progress has not been uniform across the planet. Sub-Saharan Africa is an epicenter of the crisis resulting from not reaching the goals. In many areas, climate change and conflicts are threatening the progress made during the last one and a half decades. See Figure 1.

FIGURE 1.
 Food Security Index. The MDG of reducing hunger has been achieved in part, but in many regions, food security is still low and people often go hungry. See http://foodsecurityindex.eiu. com

In January 2005, the World Conference for Disaster Reduction agreed on the 10-year Hyogo Framework for Action,9 which has the goal of substantially reducing disaster losses by 2015 by building the resilience of nations and communities to disasters. Although we have made progress in many regions towards increased resilience and reduced disaster risks, the number of people impacted by hazards keeps increasing. See Figure 2. 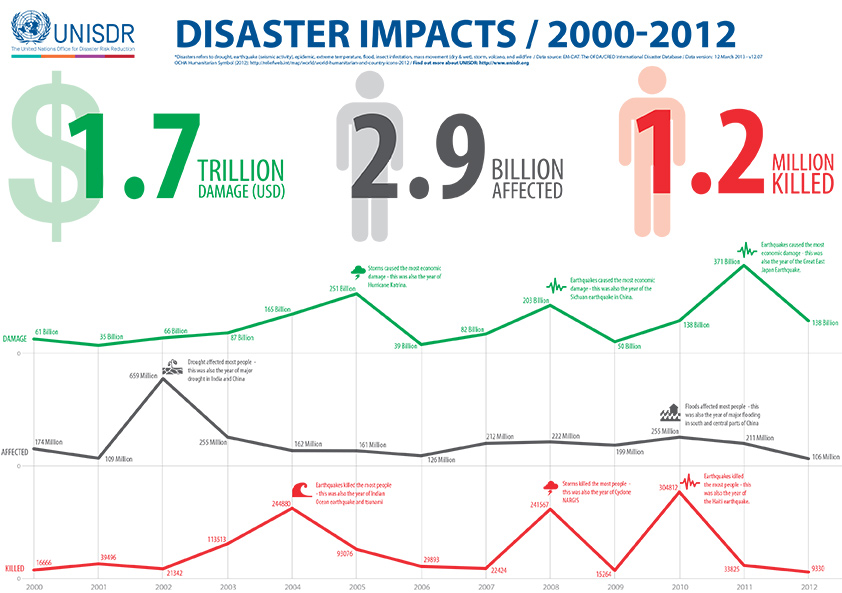 FIGURE 2.
The Hyogo Framework of Action was instrumental in improving resilience and reducing disaster risk. However, increasing exposure of a growing population and
a changing hazards spectrum leads to more and more people being impacted by disasters.

In 2013, 22 million people were uprooted by floods, storms, and earthquakes, and these numbers are rising.10 Likewise in 2005, ministers of more than 50 countries came together in Brussels to agree on an ambitious 10-year Implementation Plan for the Global Earth Observing System of Systems (GEOSS) and to initiate the Group on Earth Observations (GEO) with the mandate to implement GEOSS by 2015. GEO has made great progress with respect to data sharing, the discovery and accessibility of data, and the availability of new services for end users. But there is still a gigantic gap between the available data and the information and wisdom needed by our leaders to make the right decisions to avoid the apocalypse.

Now, at the brink of 2015, leading thinkers are working on defining the Sustainable Development Goals (SDGs) for the next ten years,11 and these SDGs are likely to be accepted by the United Nations early in 2015. UNISDR (UN International Strategy for Disaster Risk Reduction) is facilitating the process of developing a post-2015 framework for disaster risk reduction, and this process will culminate at the 3rd United Nations World Conference on Disaster Risk Reduction scheduled to take place in March 2015 in Sendai, Japan.

GEO is in the process of defining the scope for the next ten years, and a ministerial summit later in 2015 will decide on the implementation plan for the 2015-2025 period. This is a unique opportunity to ensure that GEOSS is providing the information required to measure progress towards the SDGs, to inform about the hazards our increasingly exposed population are facing on a changing planet, and to support the development of a more resilient global community.

Yes, I do agree with Safa Motesharrei and colleagues that we are heading for a “perfect storm” and apocalypse and I can imagine our future unfolding like envisioned by Oreskes and Conway. 2015 is the year when we can turn this around. We have the knowledge and the means.

Remember, fixing climate change may not add costs6 but a global climate crisis would. Instead of reading climate lies in the Wall Street Journal, shouldn’t we all be excited and yearning for news about the progress we are making? Progress towards defining the SDGs for the next 10 years, building a new resilience framework for action, and developing an implementation plan for a future GEOSS that keeps our decision makers informed about the state of the planet and provides foresight about the future?

I personally believe so much in our ability to make it right that I spend considerable time on organizing workshops12 to bring together those discussing the SDGs and those working for a new framework for action for resilience and those building the next GEOSS to make sure that GEOSS serves the needs of humanity. Call me an apocaloptemist, if you want.

1 Oreskes, N. and Conway, E. M., 2014. The Collapse of the Western Civilization – A View from the Future. Columbia University Press.