Seeing Through Smoke, Into Water and Earth

There is a new, ultra-powerful eye in the sky with the liftoff of DigitalGlobe’s WorldView-3 spacecraft, billed as the next generation remote sensing satellite. It can produce the most sophisticated images yet available for commercial applications.

Hurled spaceward from Vandenberg Air Force Base on August 13 into California-blue skies atop an Atlas V 401 rocket, WorldView-3 is now up and operating—and delivering on the pre-launch hopes of opening a new era in commercial Earth remote sensing. 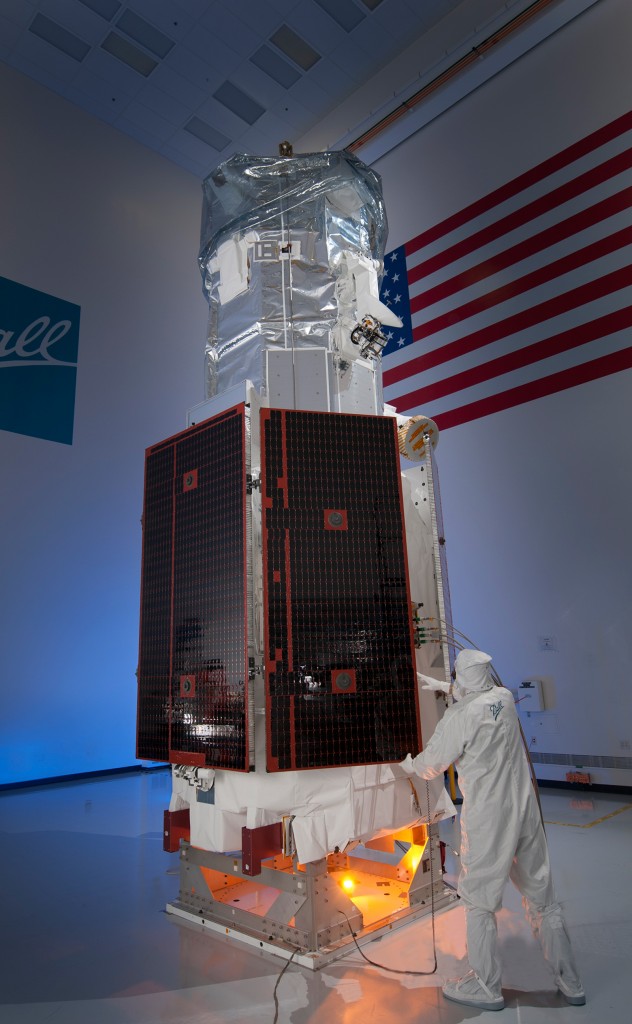 FIGURE 2.
The launch, as imaged by WorldView-1

Among spacecraft superlatives, WorldView-3 will have an average revisit time to any desired imaging location of less than 1 day and is capable of collecting up to 680,000 sq km per day. WorldView-3 will send a blistering 1.2 gigabytes of data back to Earth every second. Operating at an altitude of over 380 miles (617 kilometers), WorldView-3 will collect imagery as small as 1-foot (31 centimeters) across in resolution.

DigitalGlobe (Longmont, Colo.) recently received permission from the U.S. Department of Commerce to sell even higher resolution satellite imagery. Once fully operational, WorldView-3 will provide the commercial market images with significantly greater clarity and spectral depth than anything previously available. And as the sharpest-eyed commercial Earth-watching satellite ever built, WorldView-3 is on a mission to observe our planet in stunning detail.

Regarding resolution licensing, Bill Baugh, research and development scientist within DigitalGlobe, told Apogeo Spatial the firm’s previous license limited the company to releasing panchromatic imagery at 50-centimeter resolution. “Two existing sensors, GeoEye-1 and WorldView-2, could do better. They were capable of imaging in the 40-centimeter range. We had to degrade their resolution to 50 centimeters before releasing imagery,” he said.

“It’s all about seeing a better world,” said Kumar Navulur, DigitalGlobe’s director of next-generation products, prior to spacecraft liftoff. “We want to enable our customers to see the Earth clearly and in new ways, and make the Earth a better place.”

avulur said that, for example, highly precise images of our changing planet are important for decision makers managing Earth’s natural resources. Via WorldView-3, DigitalGlobe can automatically distinguish different colors, textures and measure change over time which is important for the energy sector, conservationists, and governments.

Shortly after the satellite’s boost spaceward, DigitalGlobe CEO Jeffrey Tarr said, “WorldView-3 will enable us to help our customers see through smoke, peer beneath the ocean’s surface and determine the mineral and moisture content of the Earth below…all with unprecedented clarity.”

CUTTING THROUGH HAZE, SMOKE AND DUST

WorldView-3 tips the scales at 6,200 lbs. (2,812 kilograms) and measures 19 feet tall and 23 feet wide (5.8 by 7 meters) with its solar panels deployed. WorldView-3 is a lookalike, in many ways, to WorldView-2 (launched on October 8, 2009) in terms of its performance characteristics. But there are significant improvements including cost savings, risk reduction, and faster delivery of data for customers. 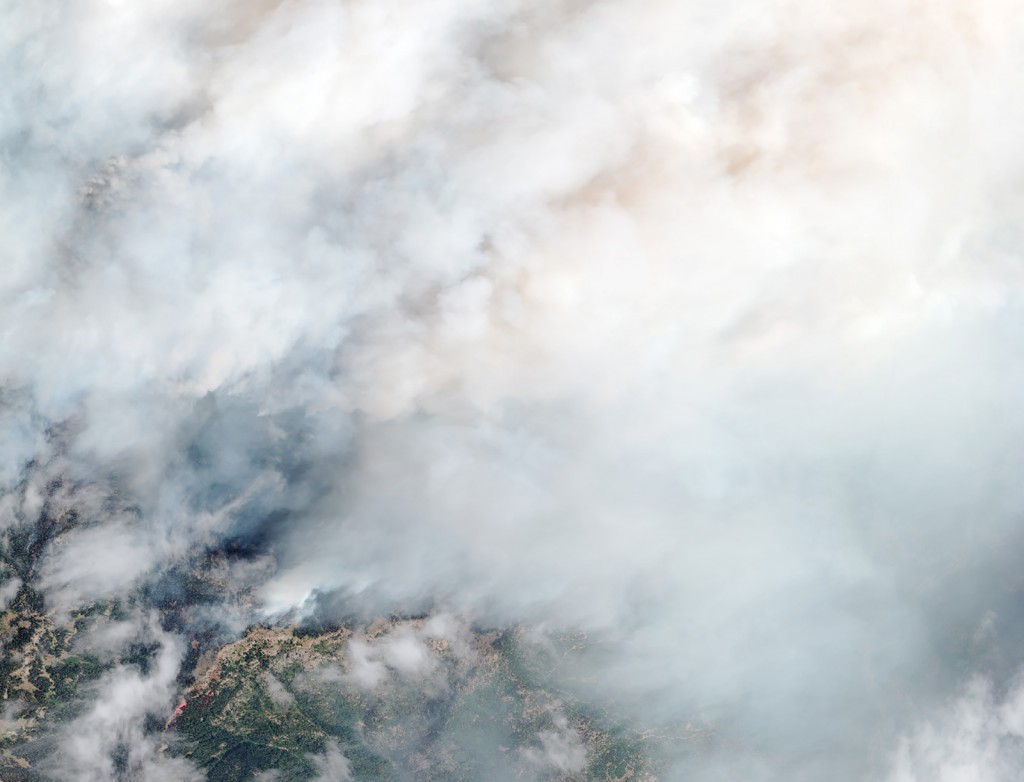 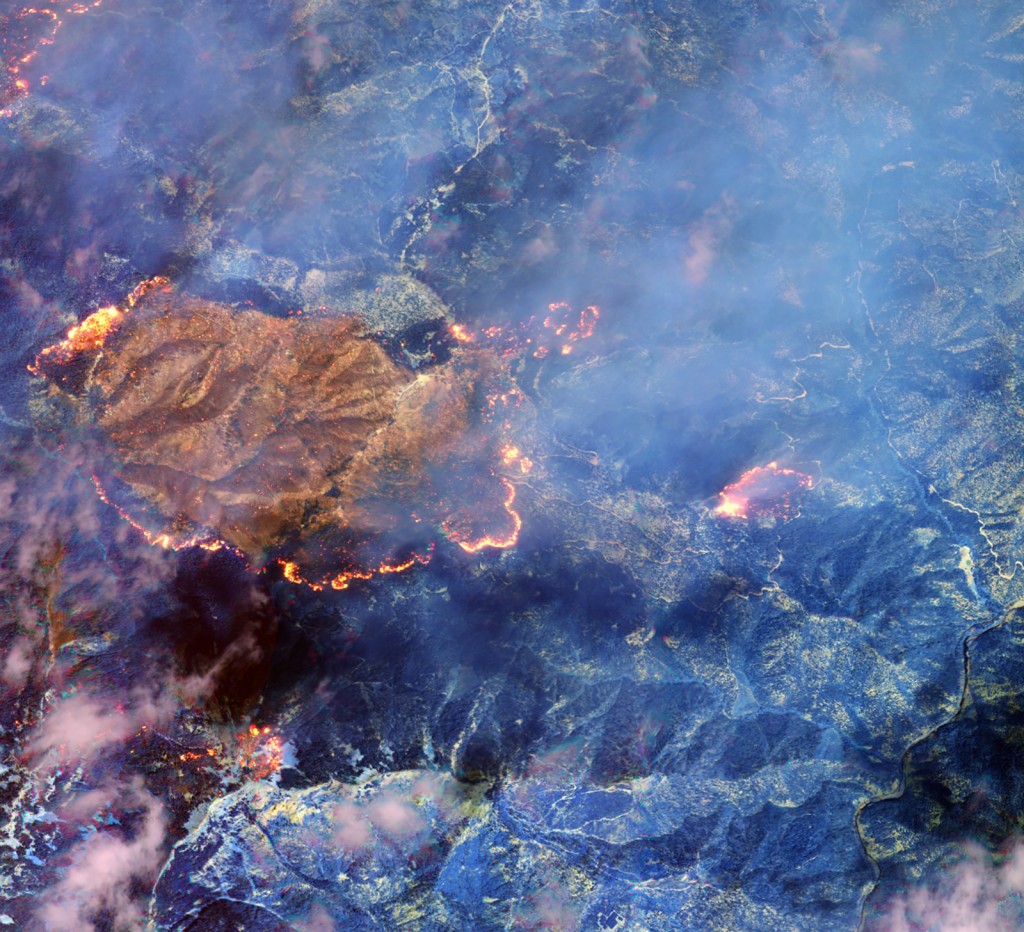 FIGURES 3-4.
On August 28, 2014, just 15 days after launch, WorldView-3 captured images of the Happy Camp fire in California’s Klamath National Forest. This is the first example of how WorldView-3 can use its shortwave infrared (SWIR) sensor to see through the dense smoke of an active fire to the ground beneath, and also locate the flame front and hot spots in the fire. The top shot is the same image but it was taken without the SWIR sensor. It’s what you can see in the visible part of the spectrum, which is what a standard commercial imaging satellite would see. In the bottom image with the SWIR sensor, the smoke disappears, and the hot spots in the fire become visible.

WorldView-3 is the fourth Ball-built satellite in the DigitalGlobe constellation. As with previous DigitalGlobe satellites, Ball was also responsible for development, integration and testing of the WorldView-3 satellite.

Furthermore, Dierks said, by using advanced Control Moment Gyroscopes (CMGs) on the spacecraft, WorldView-3 can be reoriented over a desired collection area in 4-5 seconds, compared to 30-45 seconds needed for traditional reaction wheels used on satellites.

New to WorldView-3, Dierks added, is a Ball- provided atmospheric instrument called CAVIS. That’s short for Cloud, Aerosol, water Vapor, Ice, Snow. It’s the duty of CAVIS to observe the atmosphere and provide correction data to improve WorldView-3’s imagery when it pictures the Earth. In short, Dierks said, CAVIS boosts the color band of images, making it possible to target ground scenes through such image-restricting factors as haze, soot, smoke and dust. 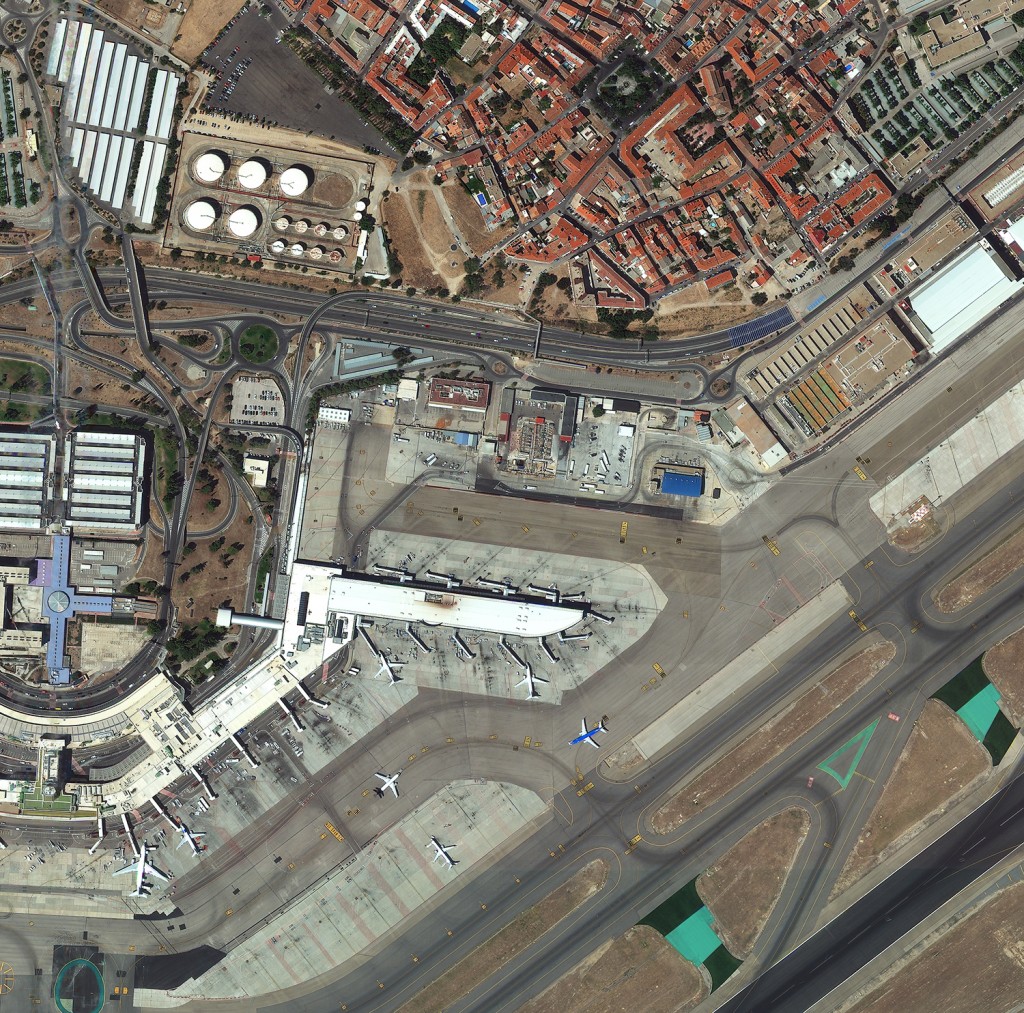 The surface figure of that mirror is manufactured to an accuracy of 1/1000th of a human hair, said Rob Mitrevski, vice president and general manager of Exelis Geospatial Systems. Given WorldView-3’s super-spectral capability, “layers of data” can be made available to users, he said, be it assessing vegetation health in trees to looking through smoke to spotting which section of vegetation is on fire.

WorldView-3 will enable us to help our customers see through smoke, peer beneath the ocean’s surface and determine the mineral and moisture content of the Earth below…all with unprecedented clarity.

The spacecraft’s SWIR sensor will multiply the value of WorldView-3 imagery by enabling the detection of specific mineral content and species of vegetation through signatures not identifiable with the naked eye.

Other imaging systems provided by Exelis include those on DigitalGlobe’s IKONOS, QuickBird, WorldView-1, GeoEye-1 and WorldView-2 satellites. DigitalGlobe’s WorldView-4 satellite, planned for launch in mid-2016, will also carry an Exelis-built imager.

On August 21, DigitalGlobe announced that they had completed focusing and achieved Initial Operational Capability (IOC) on the entire suite of WorldView-3’s super-spectral bands.

DigitalGlobe formally notified the U.S. National Oceanic and Atmospheric Administration (NOAA) of WorldView-3’s IOC, a step that means on February 21, 2015, the company plans to deliver 30-centimeter imagery to all of its customers. In the meantime, DigitalGlobe said it will make 40-centimeter panchromatic and 1.6-meter multispectral data available to their customers when WorldView-3 completes its validation and testing.

Data from the satellite’s new shortwave infrared sensor will also be available to customers; however, the resolution of this data will be restricted to 7.5 meters while NOAA is conducting a six-month study of the capability.

Dierks of Ball Aerospace told Apogeo Spatial that WorldView-3’s high-resolution space skills open up down-to-Earth markets. “You now are approaching what the aerial photography guys are doing. This satellite has a unique capability, basically imaging anywhere in the world within a day. That’s tough to do with an airplane. And the aerial photography business right now is far larger than the space imagery business. So that’s a potential market to go after,” Dierks said.