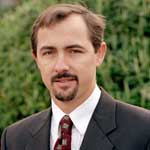 For a few decades, the Earth Observations (EO) and Satellite Communications (SatCom) sectors have operated almost completely independently, with separate meetings and conferences, while many of their issues are similar. Both deal with launching and maintaining satellites in orbit, and getting data to the ground to be useful. New technologies in data downlink in SatCom could be utilized by the EO community, with particular benefits for disaster response, ultimately saving lives around the world. Myrna James Yoo, Publisher of Apogeo Spatial, spoke with David Hartshorn, Secretary General of Global VSAT Forum (GVF), about these issues.

JAMES YOO David, you have been leading GVF since its inception a few decades ago. Can you share some background information?

However, EO information of every kind is great in providing higher levels of situational awareness, so that precious resources can be directed toward those areas most in need. Eliminating redundancy of effort is key here and Earth observation has a major role to play in that.

EO is already being used for emergency response but we want to see that data getting more deeply down range to those on the bleeding edge of the response effort. A recent development that enables that to occur at a level that has not previously been possible is the implementation, right now, in every major region of the world, of high-throughput satellite (HTS) systems and services.

The first of the high-throughput satellites were launched in 2011 in the United States by a company called ViaSat. When the first ViaSat high-throughput satellite was launched, it had a throughput on one satellite equivalent to that of every other conventional satellite over North America combined (140 Gigabit per second). So, we are talking about a capability that is orders of magnitude higher in moving data through to the recipient.

There is an important opportunity to use this capability to transmit Earth observation data before, during and after disasters.

JAMES YOO What exactly is the technology? Is it via the Radio Frequency (RF) Spectrum, as has been used historically, or is it moving to laser communications

HARTSHORN At present, most HTS services are provided at RF Ka-band. This enables higher power delivered via spot beams, which allows for more efficient use of the frequency. Lasers have been proven as an effective means of delivering satellite-based communications for certain applications, but the massive extent to which Ka-band capacity has been deployed – and that will be expanded with additional short-term deployments – means that these solutions are the primary source of HTS today.

JAMES YOO How is the development of HTS changing the economics of satellite communications?

HARTSHORN Satellites are now a consumer play and the economies of scale enable much lower cost equipment with that much higher throughput capability. Today, several years on, there is more than one high-throughput satellite provider in the United States and they have signed up close to two million paying consumer- and enterprise- class subscribers using that service. It is a mature service that has now proven itself.

In the meantime, also, the same type of service has been rolled out in Africa, the Middle East, Asia-Pacific, Europe, South America, and elsewhere.

So, again, those economies of scale continue to mount. The GVF has begun to embed in disaster relief efforts our personnel and to work directly with the first responders to place these types of systems for support of on-the-ground operations. They love it! It works. It is much more cost-effective, it has high throughput, so we can move types of data that are very bandwidth-hungry more deeply down range.

This has all been happening in real time, with recent disaster relief efforts, and what we would now like to do is to engage with the EO community to explore and see how we can collaborate between our sectors to leverage these exciting new synergies.

“What we would now like to do is to engage with the EO community to explore and see how we can collaborate between our sectors to leverage these exciting new synergies.”

JAMES YOO What are some of the obstacles to implementing your vision?

HARTSHORN There are many moving parts. Everything that I just said is a lot easier to say than it is to do. One of the big challenges that we have seen is simply getting doors opened that have been closed or further opened that are only cracked. That is between the centers, the stakeholders, variously, who have a role to play in disaster preparedness and response. For example, the military and humanitarian organizations are often among the first on the scene when a disaster occurs. However, traditionally, those two sectors haven’t talked to each other. That has prevented coordination that would enable elimination or, at least, reduction of redundancies, and it would optimize the response effort.

That has begun to change. These humanitarian organizations have, at some significant level, begun to set aside their reservations and to provide higher levels of awareness of what their priorities and strategic plans are and how they operate, so that these things can more fully inform the way that the military entities are engaging in the response efforts. Local responders (fire, police) and national emergency response agencies have begun to engage more fully than ever before with external first response entities, in an international context.

Also bear in mind that the emergency management sector itself is, in the long term, relatively new. It didn’t even really exist as a discipline until a couple of decades ago. So, everybody is making this up as they go along and what’s exciting is that we are seeing closer coordination, globally, nationally, and at the regional level, where all stakeholders are being brought into the room, in varying degrees, to leverage, to coordinate, to optimize, to reduce redundancy, and so forth.

JAMES YOO What are some upcoming opportunities to increase the collaboration between the VSAT and EO communities for disaster preparedness and response?

HARTSHORN I’ve been in the satellite communications industry for more than 20 years and I will confess, fully, that over those 20 years, I have thought of myself as a professional of the satellite communications industry – full stop. I have seen the EO sector as being over a fence and this delineation becomes even more crystallized because you have industry associations and conferences that are focused on SatCom and those that are focused on EO. The difficulty of getting dialog going and coordination across those fences has limited the types of discussions that occur in the disaster preparedness effort.

We want to take those fences down and begin more full engagement and dialog. At Satellite 2018 on March 12-15, 2018, in Washington, D.C., we are looking to have the next in a series of discussions to take that dialogue to the next level.