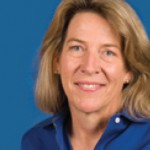 P lanetiQ plans the first commercial constellation of weather satellites, with 12 GPS Radio Occultation satellites on orbit by the end of 2017 and 18 by 2019. Backed by Moog and Millennium Engineering and Integration, PlanetiQ will offer real-time delivery of more than 18,000 occultations per day, consisting of more than 8 million observations per day of temperature, pressure and water vapor. This unique data set will greatly enhance weather forecasting, climate monitoring, space weather prediction, and weather information analytics, driving tremendous benefit to government and commercial customers worldwide.

APOGEO What sensors will your satellites carry?

PlanetiQ’s initial constellation of 12 satellites, to be fully deployed by the end of 2017, will carry the fourth-generation radio occultation sensor currently in development by Moog Broad Reach. Moog Broad Reach built the existing gold standard radio occultation sensor that is proven in space on 20 missions. The fourth-generation sensor will reduce the size, weight and power of previous versions while maintaining performance. Importantly, the fourth-generation sensor will receive signals from all four major GNSS systems: GPS (US), GLONASS (Russian), Galileo (European) and Beidou (China), providing a minimum of 18,000 profiles per day of atmospheric temperature, pressure and water vapor.

Future instruments planned for satellites 13-18 and beyond include the Active Temperature, Ozone and Moisture Microwave Spectrometer (ATOMMS), and a next-generation microwave radiometer. ATOMMS is currently in development by Moog Broad Reach and will measure water vapor far more accurately than current sensors, yielding 1% or better water vapor accuracy from the lower troposphere into the mesosphere.

APOGEO What types of data will you provide?

PlanetiQ’s constellation will provide a minimum of 18,000 profiles per day of temperature, pressure and water vapor, which equates to more than 8 million observations per day. Extensive research has shown that radio occultation has the largest forecast impact per observation among the satellite techniques (e.g., Cardinali and Healy, 2014; Joo et al., 2012).

Radio occultation data is ingested by numerical weather prediction models at NOAA and all other major forecast agencies around the world, greatly improving the forecast for a low cost relative to other technologies. However, existing governmental sources of radio occultation data are rapidly degrading, while planned replacements are considered experimental in nature and insufficient to meet the data, quantity, and continuity requirements of global forecast models and the weather enterprise. 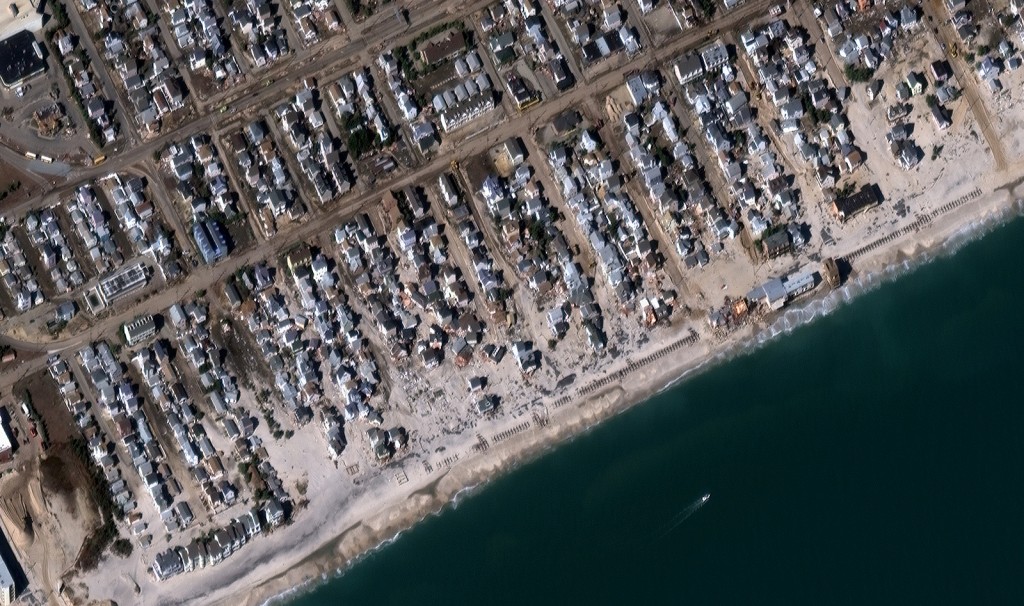 FIGURE 2.
The same area as Figure 1, after the storm, on Nov. 4, 2012. PlanetiQ satellites will enable better severe weather predictions. Image courtesy of DigitalGlobe.

APOGEO How will you deliver the data to your customers?

PlanetiQ satellites will transfer the sensor data to the ground within seconds via satellite relay, eliminating the need for investment in ground stations other than as a third-party backup. The use of a satellite relay system provides a robust and low-cost alternative to the cumbersome and expensive deployment of ground stations worldwide, and at the same time dramatically improves data delivery latency. Data will be delivered to the customer in less than 3 minutes from being collected in space. This low latency is a dramatic improvement over existing delivery times and is critical to weather and space weather forecasts.

APOGEO What is your deployment timeline, and when will you begin to deliver data?

APOGEO Will the data gap start at the end of 2014? To what extent will you be able to fill it?

The Government Accountability Office, NOAA, and an independent review team tasked by NOAA are concerned about multiple risks of data gaps now through 2038. Radio occultation data is considered by NOAA and 3 others as an effective gap-mitigator—for expected gaps in polar-orbiting data such as provided by JPSS—because it not only improves the model forecasts on its own, but also calibrates data from other satellites, thereby improving the forecast impact of other satellite data and improving the overall forecast. We plan to have data available for this purpose starting no later than 2017. 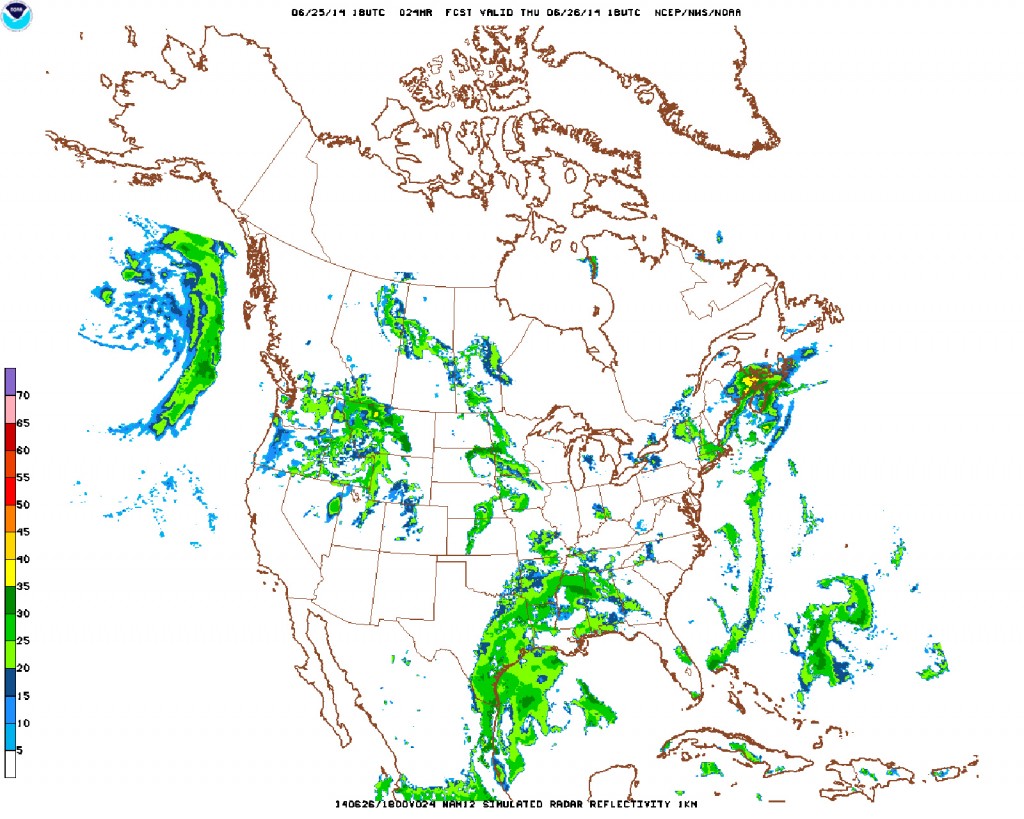 APOGEO When talking about Earth observation, a key metric is the refresh rate for every pixel on the ground. What are the key metrics for 4 your kind of data and how do you expect your system to perform?

The key metrics for radio occultation data are the number of profiles, the geographic distribution, and the latency of the data (how long from when the data is collected until it reaches the customer). In these resects, we plan to provide radio occultation data with unprecedented quantity (18,000+ profiles/day), coverage (globally distributed), and latency (delivered to the customer in less than 3 minutes from being collected). 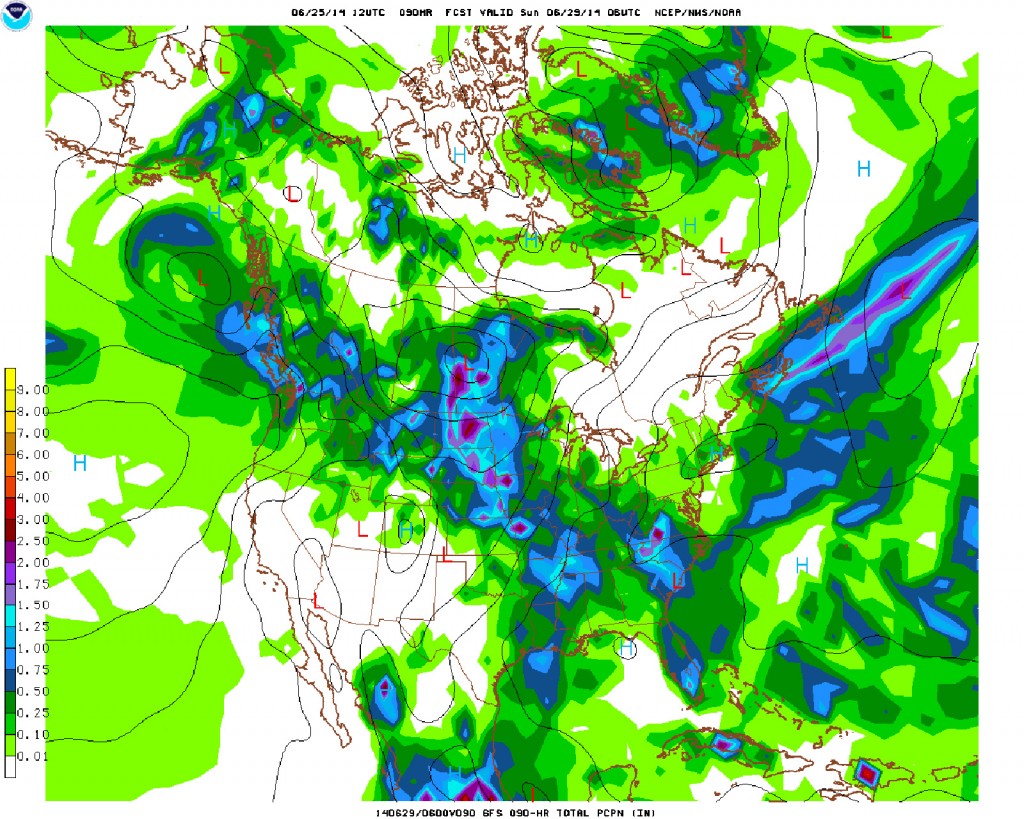 FIGURE 4.
Precipitation forecast from the Global Forecast System Model, where greens indicate .25 inches, blues are about an inch, purple is 2 inches, and dark red goes to 3-4 inches, courtesy of NOAA.

APOGEO Are you building all of your own hardware?

Our founders and partners—Moog, Moog Broad Reach, and Millennium Engineering and Integration Company—are industry leaders in designing, build- ing and operating space sensors, systems and missions, with combined experience of more than 70 years.

Moog is a highly experienced provider of spacecraft systems for both government and commercial customers, with annual revenues of $2.6 billion. For more than 40 years, the international space industry has relied on Moog products for commercial, military and civil/scientific satellite and applications. Moog Broad Reach, founded in 1997 as Broad Reach Engineering and acquired in 2013 by Moog, has a long heritage in mission design and development of instruments and flight systems. Moog Broad Reach specializes in space avionics, systems and software, and built the gold standard for radio occultation sensors currently on orbit.

APOGEO How will you get your satellites into orbit?

Our current plan is to launch the first four satellites as a secondary payload by the end of 2016, with the next eight satellites going up on a dedicated launch vehicle by the end of 2017. However, we will continue to look at any opportunities that could get us to orbit and start delivering data sooner.

APOGEO What is your business model?

Our primary customer base to start will be those forecast agencies around the world that already ingest radio occultation data into their numerical weather prediction models and know the great impact the data has on the forecast. In parallel, though, we expect increasing demand for our data by commercial weather companies whose modeling capabilities continue to advance forward every day. In the medium and longer term we see tremendous demand among numerous industries for weather and climate analytics to inform risk management, as well as an increasing need for space weather alerts and forecasts.

To start we will provide quality-checked raw data from the sensor and derived profiles in the same formats that are currently ingested by forecast agencies around the world. In the long run, however, we plan to offer weather and climate analytics products especially in the commercial sector. We plan to work closely with our customers to determine the types of products that will best address their needs. We will not get into the business of weather forecasting.

APOGEO What will happen to your business at the end of the data gap?

The most immediate data gap-between the end of life for Suomi-NNP and the launch of JPSS-1—is only one of several factors driving the commercialization of satellite weather data. We believe, and our investors agree, that there is a strong business for commercial weather satellite data independent of the gap. The impending gap is merely a symptom of the limitations associated with the traditional government-centric approach to weather satellites.Augmenting government systems with commercial data not only will lessen the risk and impacts of gaps in governmental data this decade and well beyond, but also will lower the costs and technical risks inherent in government programs, while making the global observing system more resilient and accelerating innovation in satellites, sensor technology and data collection.

APOGEO We are watching the trend of government moving more towards commercial companies for products and services from satellite imagery data (DigitalGlobe), to transportation to the International Space Station (SpaceX). What are the benefits of this trend occurring for weather data?

Currently, the U.S. faces a gap in critical weather forecast data. As we’ve seen in the areas of satellite imagery, satellite communications and space transportation, allowing industry to augment government systems and programs with commercial sources increases the supply of mission-critical data and services, increases innovation in those data and services, and reduces costs to the government and taxpayers.

APOGEO What is the background on the government’s acquisition of weather data versus that of satellite imagery?

The situation with satellite weather data today is remarkably similar to that of satellite imagery in the early 2000s. At that time, delays and cost overruns in the next generation of U.S. intelligence satellites, called the Future Imagery Architecture, threatened a gap in satellite imagery. The National Geospatial-Intelligence Agency then partnered with the private sector by awarding imagery purchase contracts (via the ClearView program, then the NextView and EnhancedView programs) to commercial providers. The result was a reliable and affordable supply of high-quality imagery for both military and civilian use, and a robust U.S. commercial industry.

The same dynamics are occurring with satellite weather data. Existing satellites are reaching the end of their design life, replacements have been delayed and gone over-budget, and the nation now faces a potential gap in data that is critical to providing accurate forecasts and early warnings. A new commercial weather satellites industry is ready to step in a augment government system s with data that is less expensive and can be available sooner than from government systems.

It is important to note a few key possible misconceptions. First, one difference from the commercialization of satellite imagery is that we are not asking for any money up front. Investors are willing to fund the development and deployment of the systems as long as key public and private customers around the world sign Letters of Interest demonstrating a willingness to purchase data once available. They are very enthusiastic about the market.

APOGEO What is the PlanetiQ Foundation?

The PlanetiQ Foundation will provide archived data free of charge to researchers, with the goal of encouraging research to further improve the impact of radio occultation data on weather forecasting, climate monitoring and space weather prediction. In addition, a scientific advisory under the auspices of the PlanetiQ Foundation will keep PlanetiQ connected to the user community, to developments in science and technology, and to the changing requirements of the weather enterprise. Input from this board will inform the evolution of our sensors, satellites and data offerings.