Can we change our priorities to reduce the mounting threats to the ocean?

A healthy Earth’s life-support system is hard to imagine without a healthy ocean. The vastness of the ocean has misled humanity to believe for a long time that the ocean is invincible. However, the rise of humanity to be the dominating species on the planet has changed this. The ocean is assimilating a major share of the carbon emitted by humans in the insatiable hunger for more energy, which drives a flawed growth-addicted economy.

The ocean is absorbing the major share of the excessive heat stored by the planetary system as a result of the anthropogenic changes in the atmospheric chemistry and the land cover. Even in the science community, it is not fully and widely appreciated that most of the excessive heat stored as a result of anthropogenic Greenhouse gas emissions and surface albedo changes — in fact, more than 90% — goes into the ocean. Despite a much larger heat capacity of ocean water compare to air, the increase in ocean surface temperature (Figure 1)1 during the last 100 years was larger than the atmospheric warming, which is to be expected in the global “poolhouse.” 2

Facilitating unlimited growth of the world population required an industrialized agriculture that has accelerated the flows of nitrogen and phosphorous into the ocean overloading the marine biosphere with nutrients. For decades, scientists have warned that the flow of nutrients is creating vast dead zones, and that ocean acidification and ocean warming are further destabilizing marine ecosystems throughout the ocean. Extracting an increasing amount of marine life as food for humans and their lifestock is increasing the stress and the risk of rapid extinction of many marine species. 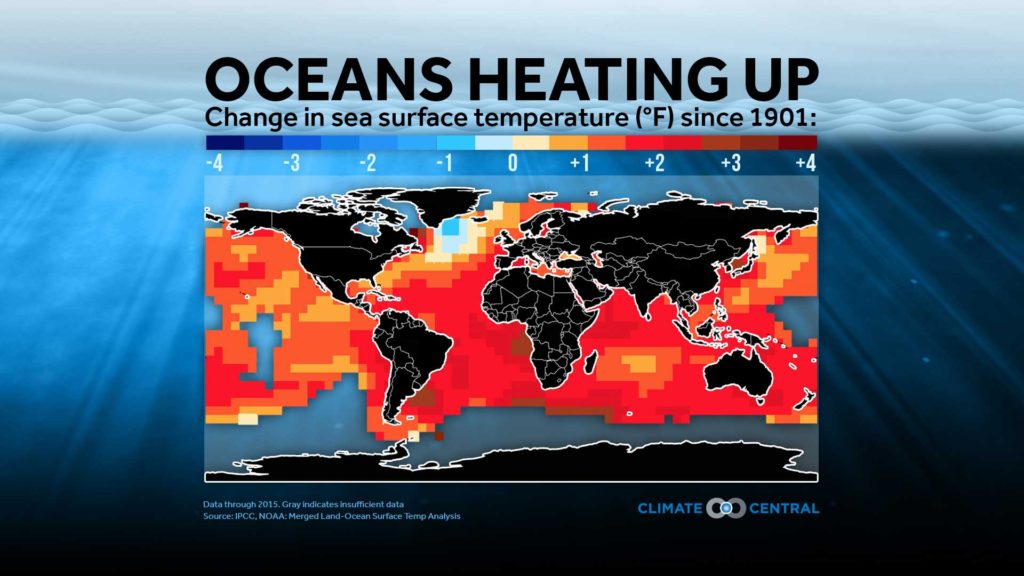 FIGURE 1
In many areas, the sea surface temperature has increased more than the air temperature.

While scientists increasingly understand the finite nature of the ocean and its resources, media attention has been limited, and the major threats to the ocean — and as a consequence to our civilization — seldom make it into the news.

There are a few exceptions, though. For example, The Guardian continually is reporting on the rapid extension of our knowledge of the major threats our civilization is facing as a result of rapid growth and the reengineering of the planetary system. The New York Times and The Washington Post are also examples of daily newspapers that bring scientific knowledge about the increasing unsustainability of our interaction with the Earth’s life-support system to their readers. The BBC makes a huge effort to disseminate the growing knowledge on global risks.

The mounting threat of plastic pollution, particularly in the ocean, only recently has received a lot of attention from the broader media. Although plastic pollution was reported in the 1970s by scientists,3 it took a long time to raise awareness for the full extent of this threat to the Earth’s life-support system. Interestingly, in this case, it seems the science community is lacking technologies for the detection and monitoring of plastics in the ocean environment4 with scientific assessment only recently appearing.3

More and more thought leaders are picking up on the challenge. For example, David Attenborough’s recent BBC series on the ocean showed that the wildlife in the ocean is facing its greatest threat in human history as it struggles to survive against warming temperatures and unprec- edented quantities of plastic waste.5 Margaret Atwood, who provided in “The Handmaid’s Tale” a scary and dystopian scenario of a possible future under climate change (and male domination), stated, “We need that ocean to remain alive if we’re going to have any hope at all.”6 About the growing plastic pollution, she said, “Something has to be done about plastic going into the ocean and it has to be done pretty quickly…” But “something” is just not enough. A fundamental change is needed back to the time when humans valued scarce resources and when one-time use of precious materials was unthinkable.

As a child, I was fully integrated in the work that needed to be done at our house and in my family. One job that often was assigned to me was to take bent nails that my father had pulled out somewhere and hammer them straight so that they could be reused. The wasteful and irresponsible one-time uses of materials in today’s society would be incomprehensible to my father.

The one-time use of plastics is truly mind-boggling. According to the Annual Review of Marine Science, in 2014, 311 million tons of plastics were produced, but other sources provide larger numbers (Figure 2).7 The largest market demand is for packaging,2 and most of that is used once and then discarded. The average time of use for all plastic before it is discarded is only 5 years.7 Even in the most advanced countries, only a small fraction of the discarded plastic is recycled.3 Recycling is always a “down-cycling,” and one of the main obstacles for increasing the recycled fraction is the low quality of resulting products and the lack of a market for these products.3 A large fraction of the discarded plastic reaches the ocean, much of this in the form of microplastics. We are only at the beginning of realizing the devastating impacts of plastic on marine life. 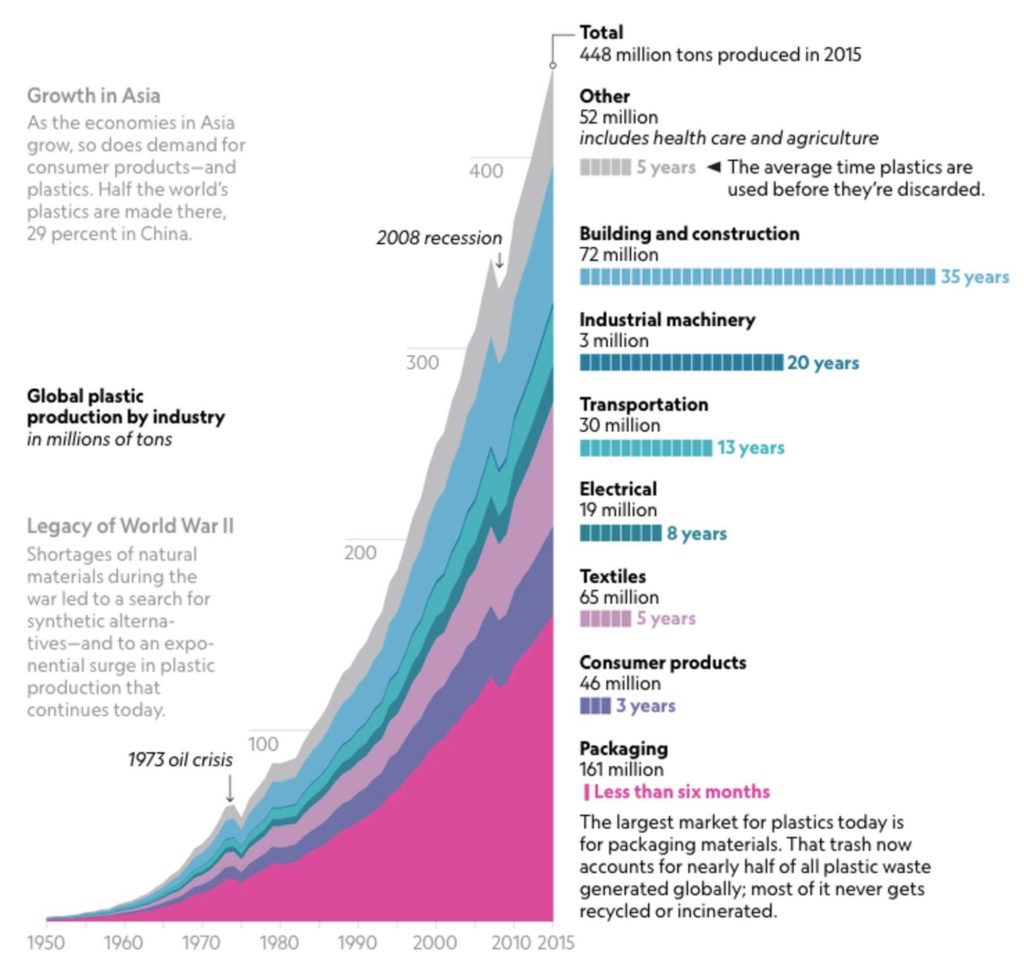 FIGURE 2
Production of plastic is rapidly increasing and most of the plastic is in use only a few years before it is discarded. Most of the discarded plastic pollutes the Earth’s life support system for thousands of years.

But many of our leaders seem to be disconnected from the existential challenges our current civilization is creating for ourselves.

A recent survey of more than 3,000 leaders in developing countries aimed to find out which of the seventeen sustainable development goals have high priority for these leaders.11 They were asked to list the six goals that have highest priority for them. It was good to see that SDG 5, “Quality Education for All” was the most often listed goal: more than 60% of the leaders included it (Figure 3). But it is shocking that SDG 14, “Life Below Water,” was the extreme outlier in being listed least. Depending on the region, only 3-5% of the leaders included this goal in their list of the six high-priority goals. 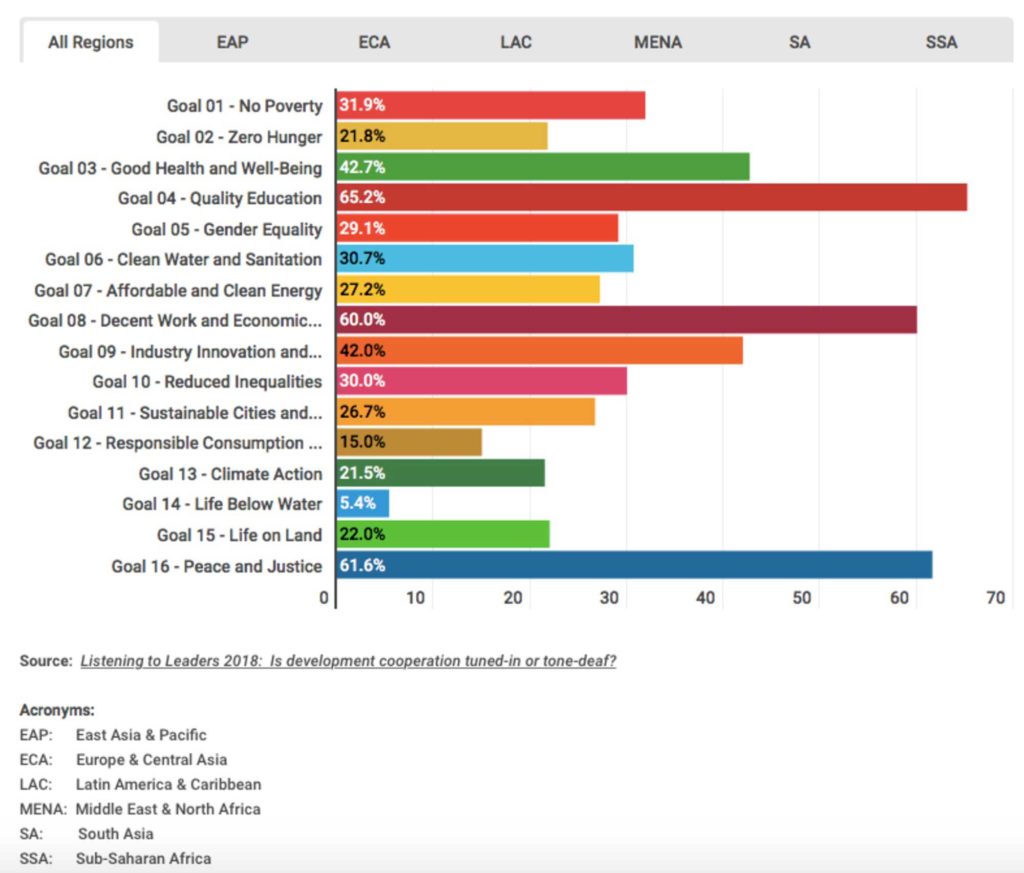 FIGURE 3
SDG 14, “Life Below Water” is an outlier in that it is least represented in the lists of the six high-priority SDGs provided by 3,500 leaders in developing countries.

The next lowest goal made it into the lists of roughly 15% of the leaders, and it was very worrisome that this second-least represented goal is SDG 12, “Responsible Consumption and Production.” There is little hope for the ocean if we don’t value responsible production and consumption, which is not based on the unsustainable one-time use of plastic polluting the Earth’s life-support system on global scale for millenniums, and don’t prioritize the protection of the ocean as a fundamental part of our planetary life-support system. Both SDG 14 and SDG 12 should have very high priority, and the targets associated with these goals should be revised to truly reflect the high priority of maintaining a healthy ocean within the Earth’s life-support system, on which the welfare of our global civilization depends.

Unless we change our priorities, we will continue to consider the ocean “the toilet of human civilization,” as Director James Cameron recently put it.12 And, then our destiny might be the one Margaret Atwood sees: “If the ocean dies, so do we.”6