The Value of Industry Standardization
Posted by Dylan Taylor on August 14, 2018 in Columns, Spatial Capital, Summer 2018 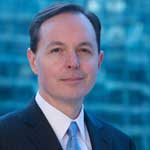 Small satellites continue to be amongst the hottest subsectors in the space industry. According to Research and Markets, as many as 6,000 smallsats will be launched in the next decade and the smallsat market should exceed $30B annually over that timeframe. As I described in a previous column in Apogeo Spatial, I believe those estimates to be conservative once the true value creation from the data products they enable is widely known.

As the industry matures however, there could be some natural impediments or accelerators that could impact these forecasts. Industry standards in manufacturing and in space servicing could be possible focal points. Industry standardization driving collective value has many historical examples. Perhaps the best known is the national railroad system in the U.S. When the railroads first rose to prominence, they were territorial, proprietary and special gauge. This situation created value at the local level due to local monopolies but limited overall industry growth. No one operator could operate at scale, rail cars and the rails themselves couldn’t be produced in mass to a single standard and passengers had to interface with different providers in different parts of the country if they wanted to travel or ship at any distance.

Due to the lack of national connectivity and limited regional connectivity, the value of the entire network was diminished. The costs were artificially high and overall demand was inconsistent and oftentimes mismatched with supply. Once a standard gauge was adopted, this all changed. In fact, the value creation was so large that anti-trust legislation needed to be created because the concentration of value was so immense. 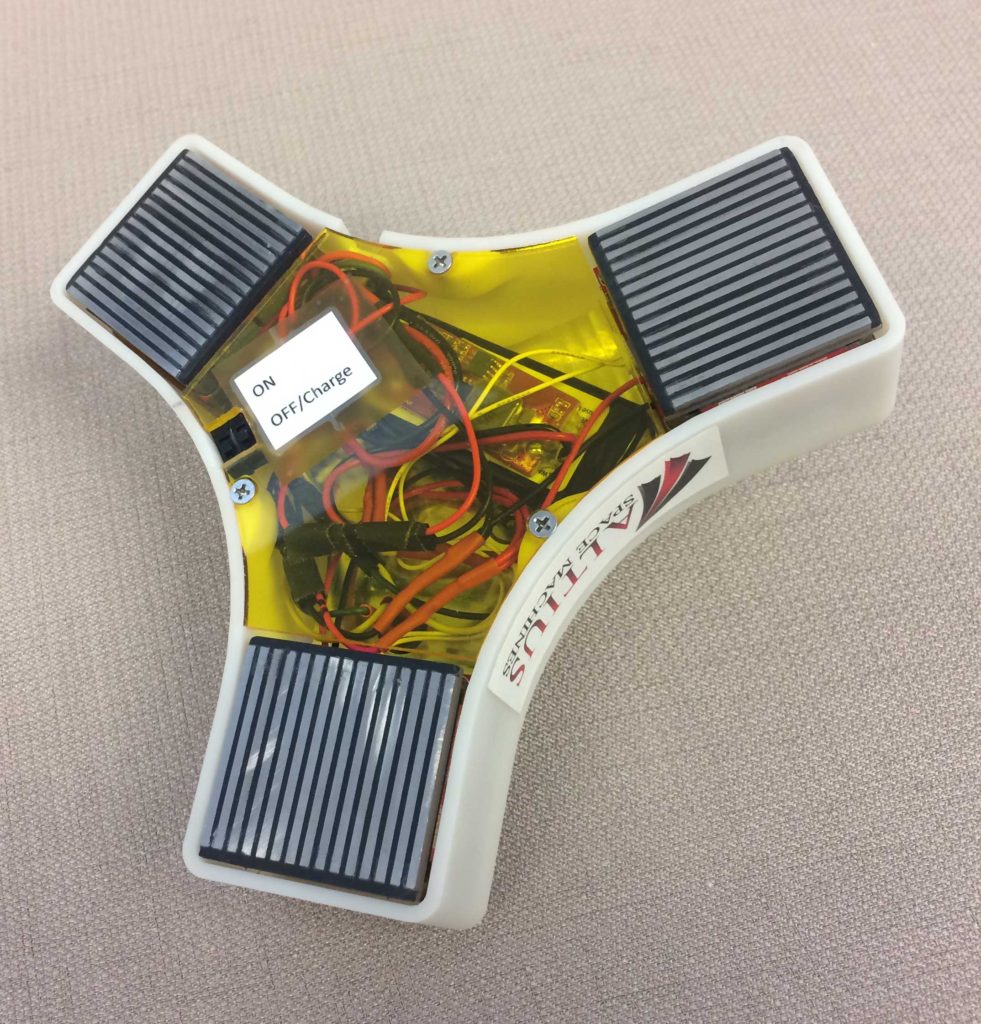 Another recent example of industry standards creating enormous value is the IEE802.11 standard more commonly known as “Wi-Fi.” Imagine a world where you would have to configure your computer for a different wireless internet protocol in every city, country and perhaps even every building. Imagine the lost productivity and value that lack of interoperability would entail, not to mention the loss in reliability, security and other qualitative factors. Having a global Wi-Fi standard insured that wireless internet became the standard method of moving ones and zeros and led to the explosion of industries such as streaming media.

Do these examples have analogies in space? I believe there are several but the two most likely to drive value are standards in manufacturing and standards in design.

One example is Altius Space Machines, which is working on a standardized robotic interface known as a “DogTag” that would allow their proprietary grippers to capture and provide on-orbit services to smallsats, be that refueling, de-orbiting or perhaps even upgrading the smallsats functionality. Imagine the possible value creation for the industry if a standardized method was developed and adopted for in-space servicing.

FIGURE 2.
DogTag Magnetic- Mechanical, courtesy of Altius Space Machines. The flight unit will have a different surface finish in that it will be a clear aluminum surface etched with the optical fiducials and clear anodized.

Another example of a company contributing to industry standardization is York Space Systems, which is developing an industrial-grade standardized bus system that they claim will both allow for lower price points and enable new data verticals to arise, due to the reduced barriers to entry. There are early signs, given recent partnership agreements York has signed, that this bus system could become an industry standard.

There is value in manufacturing standardization as well. OneWeb is tooled up for very large volume manufacturing of smallsats with a new factory that is reportedly a prime example of automated manufacturing. If elements of their design were standard, these automated processes could be more readily leveraged by others, decreasing cost and cycle time and potentially benefiting the entire industry long term. 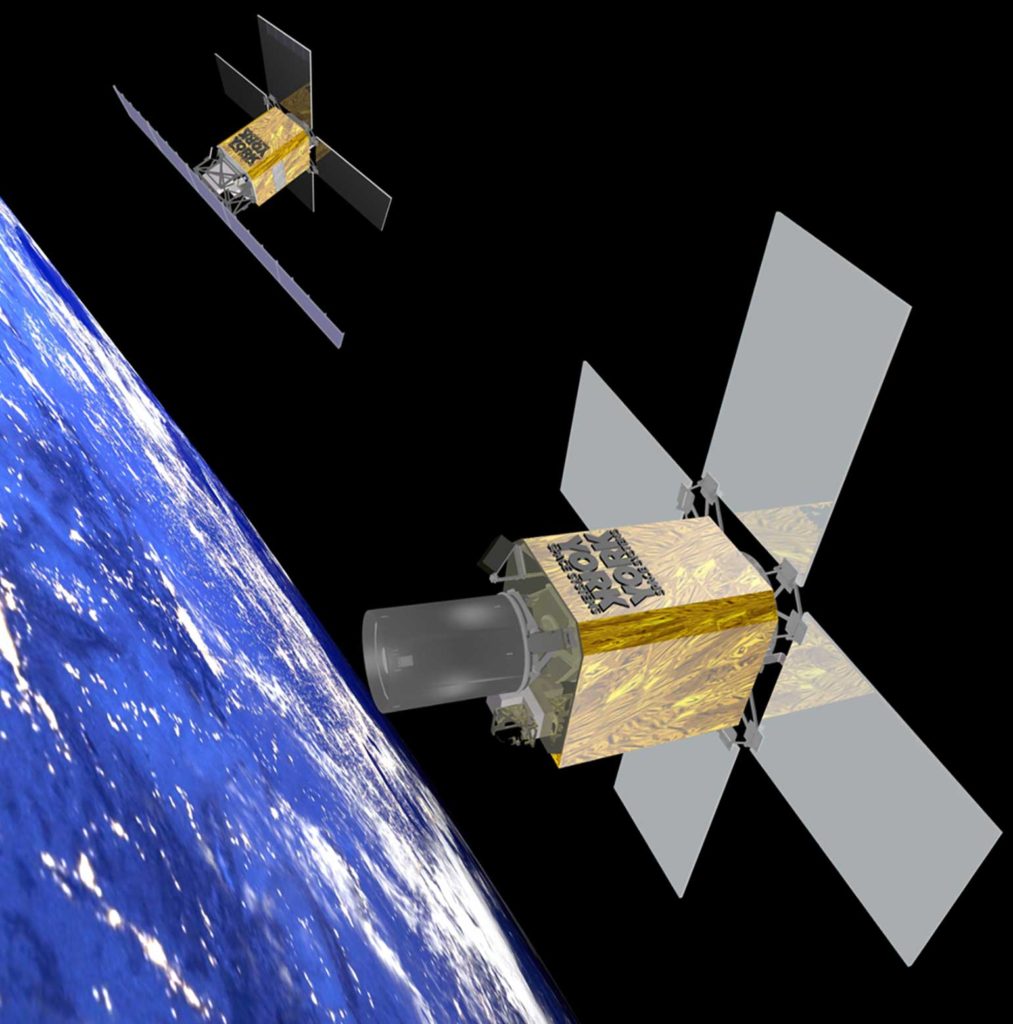 FIGURE 3.
Artist rendering of an ICEYE SAR (Synthetic Aperture Radar, in the back of the image) and a commercial optical telescope spacecraft, each being developed on a York Space Systems spacecraft bus.

So what is the downside of industry standardization? Typically, the arguments are two-fold. One is that in a winner-take-all market, being proprietary, differentiated and unique is critical. In the case of smallsats, the differentiation mainly comes from the specialized tech and software within the smallsat envelope, helping to miti-gate this concern. Furthermore, really none of the smallsat companies are currently operating at scale. By creating more ways to leverage additional scale, the whole industry should benefit both in terms of value and speed to market.

“In fact, one could argue that standardization frees up more resources for companies to innovate around the design parameters that really matter for innovation and differentiation.”

The second argument against industry standardization is that it stifles innovation — that by conforming around a standard, innovation is no longer the focus. This argument has some merit but only for the elements of design that are being standardized. That is to say, it wouldn’t keep smallsat manufacturers from innovating around other elements of their design that are non-standardized.