The XPRIZE Oceans Initiative aims to put us “on an unstoppable path toward healthy, valued, and understood oceans,” says Jyotika Virmani, Senior Director for Prize Operations at XPRIZE. The organization is a non-profit headquartered in Los Angeles that awards cash prizes in the millions of dollars to teams that develop innovative solutions to some of the greatest challenges facing humanity, in five areas: exploration, global development, energy and environment, learning, and life sciences.

The goal of the first XPRIZE, launched in 1996, was to kick-start the private space flight industry. The foundation is currently operating seven XPRIZE competitions, including the $30,000,000 Google Lunar XPRIZE, with the goal of launching a robot to the Moon that will traverse 500 meters and return video and photography images from the Moon. The long-term goal of this prize is to develop the technology that we will need as humanity to move off of Earth. The other prizes are listed above.

The Oceans Initiative is a commitment that XPRIZE made to launch five ocean prizes over the space of ten years, designed to raise awareness of the grand challenges facing our oceans, encourage a diverse community of international ocean partners to tackle them, and catalyze sustainable markets and industries. The first one was for oil clean-up technology, following the oil spill in the Gulf of Mexico. The second one was to develop pH sensors to measure the changes that are happening in the oceans as a result of climate change. According to XPRIZE, the first two prizes in this initiative have already led to an exponential increase in ocean technologies, sensor companies and products, and new careers in ocean engineering for a fraction of the price compared to traditional funding for research and development.

The current and third competition in the initiative, the Shell Ocean Discovery XPRIZE, is a $7,000,000, three-year competition to incentivize teams to develop robots to map the ocean floor and return high definition imagery from the deep sea. The National Oceanic and Atmospheric Administration will award a $1,000,000 bonus prize to develop pioneering technology for detecting and tracking biological and chemical signals under water back to their source. The competition currently has 22 teams, representing more than ten countries.The winners will be announced toward the end of 2018.

According to XPRIZE, by accelerating innovation for the rapid and unmanned exploration of the unchartered deep sea, this prize will “catalyze markets in deep ocean exploration, sustainable resource development and protection” and solutions “will provide a pathway for discovering new species and underwater life forms, along with safer methods of exploring this challenging environment.” Additionally, “this competition will ignite the public’s imagination by shedding a long overdue light on the most mysterious place on Earth.”

To view the sea floor maps that the teams produce, XPRIZE is partnering with Esri. The company is donating its ArcGIS Online software to competing teams who will submit their maps for judging via the platform. Esri will also create a Story Map of the competition, allowing everyone to follow the teams’ deep-sea adventures.

A Story Map is Esri’s medium for sharing data, photos, videos, sounds, and maps, and for using that content to tell a compelling story. This is all done with sophisticated cartographic functionality that does not require advanced training in cartography or GIS.

Virmani has a master’s degree in atmospheric science and a Ph.D. in physical oceanography, the latter based mostly on her work with sensors at sea. Her expertise in weather, climate change, tropical storms, and hurricanes brought her to XPRIZE as the technical director of the Ocean Health Competition, which focused on the challenges associated with sensors at sea. After that prize was awarded, last summer, she took on the role as the Senior Director in the Prize Operations group at XPRIZE and became the prize lead for the Shell Ocean Discovery XPRIZE.

The entire deep sea floor has been mapped to around 5 kilometers resolution and about 10 percent has been mapped to a higher resolution. “The maps that we generally see are essentially interpolations,” Virmani points out, “so they are not based on measurements. A map is a fundamental piece of understanding any environment and that is what this prize is really tackling.”

“In the short term,” Virmani explains, “we want to achieve three impacts: to accelerate technology, catalyze new markets—including markets in deep sea conservation and management, potentially eco-tourism—and mapping the entire deep sea floor. We also want to inspire the public, because, essentially, we are living on an unexplored planet. In the longer term, the goal is that the technologies will help to map the entire sea floor at a high resolution by around 2030.” 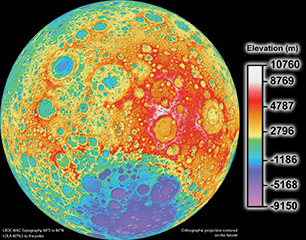 FIGURE 1.
NASA’s Lunar Reconnaisance Orbiter (LRO) topographic map of the moon was created with LRO’s Wide Angle Camera and the Lunar Orbiter Laser Altimeter in 2011. The moon is mapped to a pixel scale of close to 328 feet.

NASA’s Lunar Reconnaisance Orbiter (LRO) topographic map of the moon was created with LRO’s Wide Angle Camera and the Lunar Orbiter Laser Altimeter in 2011. The moon is mapped to a pixel scale of close to 328 feet.
This is in alignment with the road map for the future of ocean floor mapping issued by the General Bathymetric Chart of the Oceans, an international non-profit organization of geoscientists and hydrographers that aims to provide the most authoritative publicly-available bathymetry of the world’s oceans.

“The technologies that will come out of the Shell Ocean Discovery XPRIZE in the future can be used for searching for planes that go down or for geothermal vents or biological hot spots,” says Virmani. “All the technology will be deployed from the shore or by aerial drones. We did this because one of the market failures that we identified through this competition and the reason that the deep sea floor has not been mapped is that it is really expensive to have ships that have to sail for ten days before you get to the location, when it costs $60,000 per day.”

For the past 4,000 years, our technology for mapping the sea floor consisted of dropping a weight at the end of a line and measuring how far it had gone when it hit the bottom. Only in the last hundred or so years technology has allowed us to make these maps through an opaque environment. “With the exponential growth in such technologies as 3D printing, artificial intelligence, and robotics,” Virmani says, “how can we pull in some of those cutting edge changes to help us to map the deep sea floor? There are now drones that can go from the air to underwater. Why can we not use them for mapping the ocean?”

The convergence of all these new technologies combined with the talented and ambitious teams will result in some incredible leaps forward for oceanographers, with benefits for all of humankind.

The Shell Ocean Discovery XPRIZE (OceanDiscovery.xprize.org) is a global competition challenging teams to advance deep-sea technologies to allow for autonomous, high-speed, and high-resolution ocean exploration. As part of the competition, the National Oceanic and Atmospheric Administration (NOAA) will award a bonus prize to incentivize teams to develop technologies to detect the source of chemical and biological signals under water.

The $7 million prize purse will be awarded as follows:


The three-year competition was launched in December 2015 and will proceed according to the following timeline: